THE SECRET ORIGIN OF THE TELEVISION CROSSOVER UNIVERSE: WHAT IT IS AND HOW IT CAME TO BE

THE SECRET ORIGIN OF THE TELEVISION CROSSOVER UNIVERSE: WHAT IT IS AND HOW IT CAME TO BE

THE FIRST POST, AND THE MOST IMPORTANT POST. THIS IS THE POST THAT EXPLAINED WHAT THE TELEVISION CROSSOVER UNIVERSE IS. IN MY OPINION, ANY NEW VISITOR TO THE WEBSITE SHOULD ALWAYS READ THIS POST FIRST, AND NOBODY SHOULD BE ALLOWED TO COMMENT IN THE TELEVISION CROSSOVER UNIVERSE DISCUSSION GROUP IF THEY HAVEN'T READ THIS POST. HOWEVER, FROM MANY OF THE COMMENTS I GET ON MY POSTS, AND FROM SOME OF THE POSTINGS IN THE TVCU DISCUSSION GROUP, IT’S CLEAR THAT MANY "FANS" OF THE TVCU DO NOT REALLY UNDERSTAND THE TVCU, AND HAVE NEVER READ THIS POST. AND THAT MAKES ME SAD. PLEASE, YOU DON'T WANT ME TO BE SAD, DO YOU? JUST READ THIS POST.

This introductory post was first posted on January 10, 2011, but has since been updated. Most recent update was March 9, 2016.

...But it really started a long, long time ago, in a small town not too far away (well, if you live with me, that is.)


Worcester, MA. June, 1978. My parents decide to move to California. I am five. To keep me occupied for the long trip, I'm given a handheld football video game, and a comic book, and that book was the spark. It was an issue of Scooby's Laff-a-Lympics, based on the cartoon. It was my first crossover. Scooby, Yogi, the Flintstones, and all the rest, interacting in the same story. It was amazing.


Orange, MA. September 11, 1979. Watching ABC with the parents, specifically Happy Days. It ends with a cliffhanger. Well, on to Laverne & Shirley. But what is this? It's the story from Happy Days, continuing directly onto another show!!! From this moment on, I began paying attention to television crossovers. I got a notebook, and starting keeping track of which shows seem to connect with others to create shared realities.


Lacey, WA. 2001. Having recently uncovered this new fangled thing called the internet, I make an amazing discovery. I am not alone. There's such a thing as a crossoverist. I find links to Toby O'Brien's Toob World and Thomas Holbrook's Poobala. I start a blog on Myspace where I frequently discuss crossovers. I meet James Bojaciuk, Ivan Ronald Schabloski, and Gordon Long. We discuss many crossovers there.

2010. James and I decide to create an online book club. We so enjoy working together we conspire to create a new website. I decide to turn my notebooks of crossovers from my childhood into a series of articles on that site. I create a Facebook group called the Crossovers Forum, as a place devoted only to my favorite topic. Many folks I'd met online join the new forum, and others find us as well. It became very popular. I realize that the only way to do my own TV crossovers project is to do it my way with no restrictions. I let James know I'm going to create a blog instead of co-creating the website, called the Television Crossover Universe. I have doubts of its success but feel compelled to do it anyways.


January 10, 2011. The first blog post. So what's come since. Well, nearly 400,000 views. Nearly 300 posts. Since the inception, James (remember him?) has become co-owner of the site. He has written far fewer posts, and yet those few posts have brought in the most views, so it really made sense. And, as stated earlier, I really like working with him. We had a great relationship on crossover stuff, and from the very beginning of this website, he became a valued adviser and contributor.


We've also had several contributions from Gordon Long, Matt Hickman, Ivan Ronald Schablotski and one guest post from author Brad Mengel. Now I'm taking the next steps. Two books have been published, focusing on crossovers, with more on the way. And now we have a podcast! I'm so pleased at the success of this website, and not just because it feeds my ego, but because it's really cool to know that there are other weirdos out there like me who love fictional crossovers, and really get into television crossovers.

So, now that you know how it got started, let's talk about exactly what it is we're doing here.


The Television Crossover Universe is a shared reality that is based in interconnected crossovers. The center is I Love Lucy, so to be in the TVCU, you should be able to do a "six degrees of Lucy".

To be considered a valid crossover, it has to be an in-story crossover between two series. It can be on screen or in print. Fanfiction and fan art do not count. Neither does photoshop or YouTube. There are exceptions. Fan films that get credited in IMDB count. There are some fan sites that I include as apocrypha because I just really like them and it's my website.

I don't like to make things up. This site takes an "observe and report" approach to crossovers, and I consider the story events to be exactly the way we see it on the screen or read it as it was written. But when there are contradictions between crossovers, I will use theories to explain and reconcile. Theories can change should a better idea be presented or especially if a story comes along to make me change my theory.

Another way I reconcile things that don't fit are alternate realities. And so I have created a "tentative" mythology regarding alternate realities. The Television Crossover Universe is part of a larger Multiverse, Megaverse, and Omniverse. Thus, out there beyond the TVCU are the other realities of DC and Marvel Comics, other shared reality website multiverses, and pretty much anything done by other people who do it differently. But there is also a Television Crossover Multiverse. This multiverse is more of a set of divergent timelines and pocket dimensions.


So what about all those things that seem to cross in, but can't possibly be in the same reality? First, let's tackle the easiest: the future. The future hasn't happened yet, so potentially any future story with a crossover link is valid, at least until we get there. The future isn't constant. There are many possible paths, and none are really invalid, so long as they agree that our present is indeed what happened in their past.

So what about ones that do conflict with the present? And what about remakes and reboots? In 1998 DC Comics incorporated a scientific theory called Hypertime into its canon, and in 2006 got rid of it. DC's version had all these timelines constantly fluctuating and weaving in and out, merging and unmerging. The reason was so that they could say every story happened somewhere. I have also adapted the Hypertime concept. My version is different. Basically, I blame it on time travelers. Every time a time traveler goes into the past, he or she creates a divergent timeline. Think of it as a river with a fork. One timeline now takes two directions. One is the main TVCU, and the other is the divergent timeline. Two futures stemming from one past. Though my version is different, my reason is the same. Everything exists. Every version of Superman has its own home in its own TVCU divergent Hypertimeline. This also accounts for remakes of movies, reboots of series, and stories where zombies or apes or vampires or robots or mutants become dominant in the world.


Whenever time is altered, usually due to time travel interference, a new timeline splinters off of the main timeline. The original timeline is not replaced. It still exists, while a new pathway is also created parallel to the original. These divergent timelines get such original names as "TVCU-2", the Romero timeline, the Mirror Universe, etc. 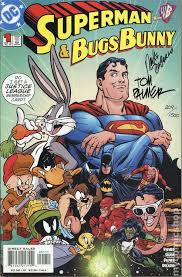 So now that we have these divergent timelines, in the space in between those worlds, the excess magic is in a space that has been called Limbo, Hell, or the Void. Within it, the magic formed several worlds of magic formed by the imaginations of the people of the numerous timelines. This includes places like Oz, Wonderland, Narnia, Fairytale Land, and the Hell Dimensions. It's also the location of the Looniverse.


The Looniverse was first named in the Superman / Bugs Bunny mini-series, as the home of Bugs Bunny. So to exist in the Looniverse, the same crossover rules apply with Bugs at the center.


So that's about it. In each blog post, I tend to explain anything out of the ordinary. So in the Scooby post I'll explain how the TVCU can have a long lived taking dog and in the Muppet post I'll explain how a talking frog hosts his own show in the TVCU. I welcome you to the world of TV and my mind. 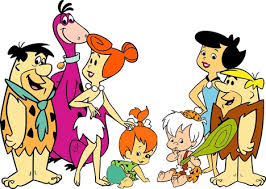 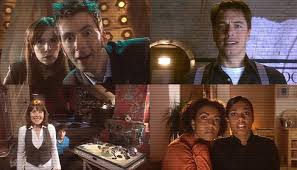 One final note specific to Television Crossover Universe: Worlds and Mythology. The chronologies found in Worlds and Mythology are the ones that have taken the greatest liberties with wild theories. While most of the posts on the website take a stricter approach to my standard of “observe and report”, the ones presented in that compilation are specifically the ones I’ve had the most fun with, going a little against my own rules to make the implausible all fit and make a little bit of sense.