Chuck was another show that was really popular when this was originally posted on January 13, 2011, the fourth day of this website's existence.  And it was another show that seemed to lose me as it went on.  However, like Fringe, it still remains important to the TVCU due to its crossovers.

As part of my ongoing attempt at updating my posts, here I go again, though I don't think this one will need too much in changes.  Chuck did get mentioned in my book, the Horror Crossover Encyclopedia, published by 18thWall Productions, so I added material from the book to this blog post.  For TVCU purposes, any mentions of the Horror Universe in this post is referring to the TVCU.

Chuck was a series that ran from 2007 to 2012.  It’s a fun action comedy and a perfect fantasy for nerds like me.  Sadly, not all of my favorites are in the TVCU, but luckily for me, Chuck is in. 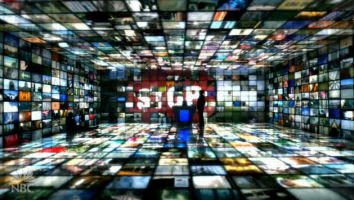 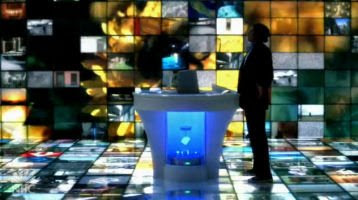 Let’s do a show by show breakdown of how Chuck fits into the TVCU. September 22, 2004--LOST--"Pilot"--An Oceanic Airlines plane disappears, in reality crashing into a desert island.  Oceanic is one of those fictional companies that gets used a lot making crossover connections.  It has been used in JAG, ALIAS, EXECUTIVE DECISION, CATEGORY 6:  DAY OF DESTRUCTION, PANIC IN THE SKIES, CODE 11-14, NOWHERE TO LAND, AFTER THE SUNSET, DIAGNOSIS MURDER, THE WAR AT HOME, HUSTLE, CHUCK, LAX, and TALES OF THE SHADOWMEN VOLUME 2:  GENTLEMEN OF THE NIGHT.  I'm sure there are others that I will miss.  Please feel free to contact me and let me know so I can add them to my next update in six months.  It should also be mentioned that at some point in the show, Nozz-a-la Cola is mentioned, which was seen in KINGDOM HOSPITAL.  Note that the entire series time on the island up to "There's No Place Like Home" takes place between September 22 - December 31, 2004.  For a full timeline, see http://lostpedia.wikia.com/wiki/Timeline:December_2004.

August 2006 to present--CHUCK—First, let’s talk about the show as a whole.  Let’s talk about the show.  Chuck went to Stanford, but got kicked out for cheating (which he didn’t do and wasn’t the real reason) and went to work for Buy More’s Nerd Herd (not Best Buy’s Geek Squad.)  However, his former classmate (who got him kicked out and stole his girl) turns out to be a secret agent.  Before he is killed, he sends Chuck an e-mail containing a program that is literally downloaded into Chuck’s brain then destroyed.  Chuck then has tons of government secrets in his brain that aren’t available anywhere else anymore.  So Chuck is teamed with two agents, one who poses as his girlfriend, and one who has to pose as a Buy More employee.  Fun action and hilarity ensues, and hasn’t stopped.  Each season has created new twists, but I won’t go into them all.  This is a site about crossovers.  So let’s stick to that.  But you should watch the show.  Toby O'Brien presents some inferred crossovers that come from Chuck that are certainly unmentioned by valid.

2007 to Present--CHUCK WEBISODE SERIES--NBC keeps producing different funny little bits on the web to tie into the show.

September 2006—CHUCK—“Chuck Versus the Helicopter”—Amongst the many government secrets in Chuck’s head is that Oceanic Flight 815 was shot down.  Of course, it didn’t actually get shot down, but that’s the government story.  In reality, it got LOST. 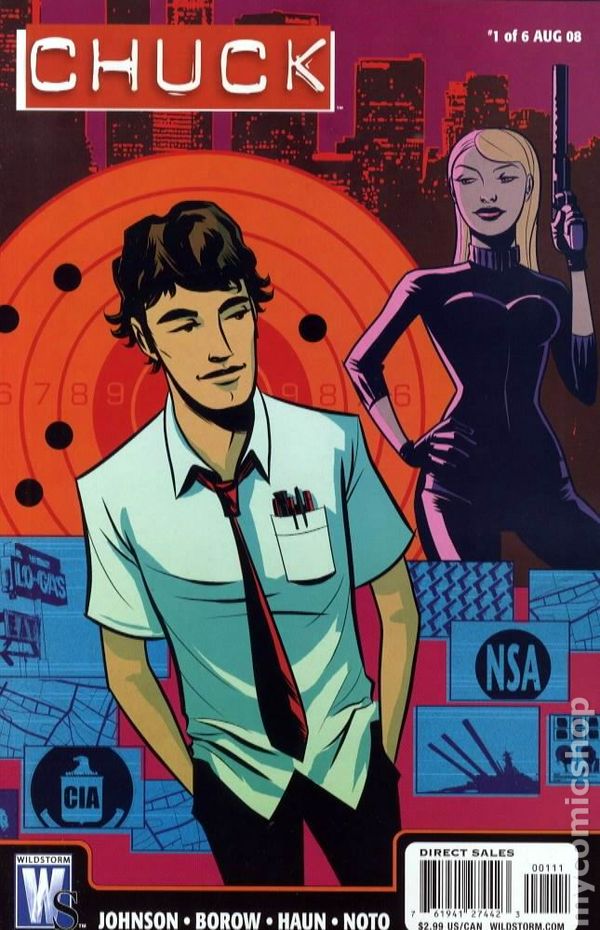 May 2007—CHUCK (WILDSTORM COMICS)—This is a comic book mini-series occurring within the main continuity of the television series. 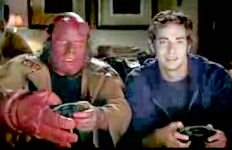 HELLBOY II PROMO (COMMERCIAL)
Release Date: June 2007 (Contemporary Setting)
Series: Hellboy (film)
Non-Horror Crosses: Chuck
The Story: Chuck and Hellboy hang out playing video games and talking the spy business.
Notes: This was part of a series of advertisements for the upcoming Hellboy II film. Normally, commercials are not counted but in this case, the actors stay in character, they don’t make any references to their own fictionality, and the script is not written like a promo but more like a mini-episode. October 2007--CHUCK--"Chuck versus the Sizzling Shrimp"--From James Bojaciuk:  Somehow I missed this one. In this episode, James Hong played the part of wheelchair-bound tong-leader Ben Lo Pan. Hong is also the infamous David Lo Pan in Big Trouble in Little China. I'd need to rewatch the episode, but Ben Lo Pan is either Lo Pan's latest identity--or, to offer a less interesting option, is Lo Pan's relation.

November 2007—CHUCK—“Chuck Versus Santa Claus”—In this episode we learn that Buy More manager “Big” Mike” is the cousin of police Sgt. Al Powell, who was one of the officers involved in the events of the films DIE HARD and DIE HARD 2:  DIE HARDER.

August 2009—CHUCK—“Chuck Vs. the Anniversary”—In this episode, there is an appearance of Bud, a repo man who was last seen in the film REPO MAN.   Also in this episode, Chuck applies for a job with Vandalay Industries.  This is a company that George Costanza used to throw out in his lies often.  At the time, it seemed he made up the name, but it seems that perhaps the company was real, and just was being used in lies.  SEINFELD is already in.  (Seinfeld is in through a crossover with MAD ABOUT YOU.) 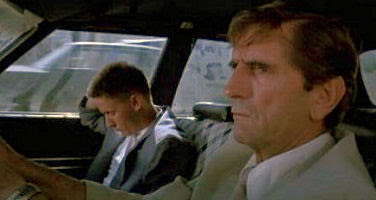 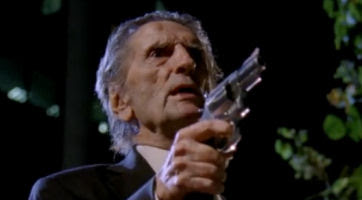 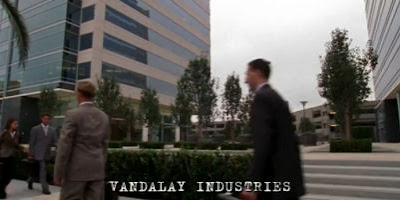 2010--LITTLE BLOSSOM--One student calls another a Nerd Herder, referring the the Nerd Herd, the tech support section of the Buy More stores from CHUCK.

TVCU-27-MAD--MAD is an alternate reality in the Television Crossover Multiverse as demonstrated in an episode of Batman:  the Brave and the Bold.  The MAD episode "Da Grinchy Code/Duck" features a parody of CHUCK.

FINAL NOTES:  I had heard that CHUCK had crossed over with GROUNDHOG’S DAY, but sadly I've found no evidence.  What I was told was that Ned, the annoying insurance salesman from the movie, had appeared on the show.  But I’ve scoured the internet, and especially IMDB, to find the truth, and it seems it was a false rumor, I’m sad to say.  However, Groundhog's Day is in as recently presented in a TVCU blog written by Gordon.

So that’s my blog for today.  A little smaller than the last few, but then Chuck has a smaller history.

Considering the show has only been on since 2007, there are a remarkable amount of crossovers.  As you see, CHUCK has been brought in through the connection to LOST.  (LOST comes in from a connection to ALIAS.  CHUCK, LOST, and ALIAS are all in Crossovers.)

HELLBOY and SEINFELD are already in.  (Seinfeld is in through a crossover with MAD ABOUT YOU.)