TVCU Trivia of the Day: What fictional character has crossed with both Lucy Ricardo and Lucy Carter?

Not much to say for an intro here.  The Danny Thomas Show, or as I knew it, Make Room for Daddy was a popular comedy that was in reruns when I was a kid, and I really liked it.  The show was popular enough to warrant some crossovers, and in fact launched the Andy Griffith Show, something not a lot of people know.  And Danny Thomas was the inventor of the spit take, where one spits out his beverage when hearing something shocking.

On to the chronology... 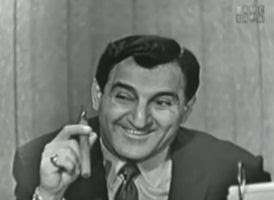 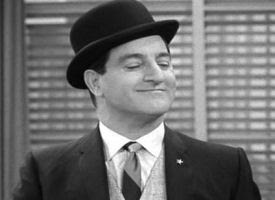 1953 to 1965--THE DANNY THOMAS SHOW/MAKE ROOM FOR DADDY--This is the story of comedian Danny Williams, his wife, Kathy, and his children Rusty and Linda.

December 1958--THE LUCY-DESI COMEDY HOUR/I LOVE LUCY--The Williams (of THE DANNY THOMAS SHOW) take a vacation in Connecticut.  They rent the home of Lucy and Ricky Ricardo.

February 1960--THE DANNY THOMAS SHOW--"Danny Meets Andy Griffith"--The Williams family drives through Mayberry and are pulled over by Sheriff Andy Taylor.  (This show was the pilot for THE ANDY GRIFFITH SHOW.)

October 1961 to May 1963--MAKE ROOM FOR DADDY--A character named Jose Jimenez is a recurring character on this show, appearing in six episodes. This character also appears on THE STEVE ALLEN SHOW, THE SPIKE JONES SHOW, HOLLYWOOD PALACE, a cartoon whose name I could not find, "a comedy album by Joey Forman (as the Mashuganishi Yogi) which spoofed the Indian mystic movement popular in the psychedelic sixties" (quoting Toby O'Brien), THE BILL DANA SHOW, BATMAN, SWINGING SPIKETACULARS, THE NEW STEVE ALLEN SHOW, I WANT MY MUMMY, THE ED SULLIVAN SHOW, THE SECOND ANNUAL COMEDY AWARDS, THE RED SKELTON HOUR, THE DANNY THOMAS SHOW, and THE STEVE ALLEN PLYMOUTH SHOW. October 1963--THE DANNY THOMAS SHOW--"The Woman behind the Jokes"--Buddy Sorrell, comedy writer for the the Alan Brady Show (as seen on THE DICK VAN DYKE SHOW) moonlights writing jokes for comic Danny Williams. 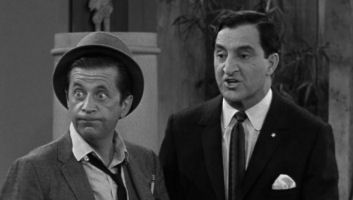 January to February 1965--THE JOEY BISHOP SHOW--Rusty Williams, son of Danny Williams, goes to stay with his uncle Joey Barnes.

1965--The Danny Thomas TV Family Reunion--The Family is living out in Hollywood now.

November 1967--THE DANNY THOMAS HOUR--"Make More Room for Daddy"--Rusty is in the army and dating Susan McAdams.

1969--MAKE ROOM FOR GRANDDADDY--The pilot for the reunion show. 1970 to 1971--MAKE ROOM FOR GRANDDADDY--Rusty and his wife Susan and their kids move back in with Danny and Kathy.   In the series, the character of Terry left her son, 6-year-old Michael (played by Michael Hughes) in the care of his grandparents while she and her soldier husband were stationed overseas. (Thanks, Wikipedia.)

January 1971--MAKE ROOM FOR GRANDDADDY--"Lucy Carter, Houseguest"--Thank you, Toby. Lucy Carter, of THE LUCY SHOW, stays over in the Williams home.  Not Lucy Ricardo.  Lucy Carter.    Danny Williams has had the pleasure of knowing two screwy red heads in his life.

TVCU-29-Skitlandia and non-canon commercials--Danny, Kathy and Linda Williams has a counterpart as seen on a 1979 episode of SATURDAY NIGHT LIVE.

And that's it.  A mostly forgotten show, that had a major impact on the Television Crossover Universe. 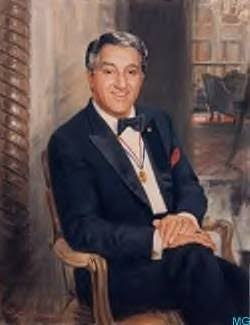