Josie and the Pussycats 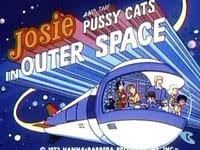 So the other day I was telling Crazy Ivan how my rules aren't set in stone, and I will change things when I think it makes sense.  This is one of those.  When I mentioned Josie and the Pussycats in my Scooby-Doo blog, I stated that the cartoon is in but not the comics.  But then when researching for this blog, I found how much the comic and cartoon are tied together.  In fact, the comic actually made several changes before the cartoon aired in order to make the comic fit the cartoon and have them sync up.  So here's the story of some rock stars...

1968--SHE'S JOSIE--This is the original comic book series that introduces Josie McCoy and her friends.  Though the comic series starts in 1962, I'm compressing it to fit into the framework of a normal length of time for high school student.  I'm placing the pre-Pussycats era in middle school.

1969--JOSIE--The series was renamed in 1965.  Note that beside it's own title, Josie also was featured in other MLJ/Archie Comics titles.

1969 to 1970--THE ARCHIE COMEDY HOUR--The same show as the previous year, but now an hour long with Sabrina segments added.  Note that Archie, Sabrina, and Josie live in different towns, but all go to Riverdale High.  This isn't any different than my high school, which was in my home town, but which was attended by students from four different towns.

1970--JOSIE # 42--Little known fact.  The idea to change Josie to Josie and the Pussycats was in pitching the idea of turning the comic into a cartoon.  This followed the success of making animated versions of ARCHIE and SABRINA.  So in preparation, the comic started making the conversion to match the new upcoming cartoon.  In this issue, Josie meets Alan M.

1970--JOSIE # 43--Alexandra Cabot discovers her cat is the reincarnation of an ancestor who was executed for consorting with witches.  When she holds the cat, she can cast spells (that always backfire on her.)  Eventually she loses this ability.

1970--JOSIE AND THE PUSSYCATS # 45--Josie and Melody decide to form a band and ask Alexandra to be their bassist, but she insists on calling the band Alexandra's Cool Time Cats, whereas the other two want to be called the Pussycats.  So Alexandra is fired and replaced by a new student, Valerie.  Alex Cabot becomes the band's manager.

1970--JOSIE AND THE PUSSYCATS (FILM)--This is the story that explains how a high school band became famous practically overnight.  The film came out in 2001, but fits in nicely here since in Josie # 45, the band is first formed, then suddenly in the next issue they start travelling the world.  Of course, any references to modern pop culture and technology must be ignored, and use your imagination to replace it with something from that era.  For instance, Carson Daly should be seen as Dick Clark.  Here's a interesting article that links the evil conspiracy that tried to brainwash our youth with the Illuminati. 1970 to 2009--JOSIE AND THE PUSSYCATS (COMICS)--The continuing series whether in their own title or in other titles, ran off and on from 1970 to 2009. Because Riverdale and the surrounding communities are in a time anomaly, the character don't age yet aren't aware that they don't age.  Note that even though the film says they are in Riverdale, actually, Josie lives in Midvale, while Sabrina lives in Greendale.  My thoughts is that Riverdale is the largest of the towns.  It's like how people in Cambridge say they are from Boston.  Archie, Josie, and Sabrina interacted from time to time, and they also interacted with MLJ super-heroes.  Interestingly, time passes for the MLJ super-heroes but not the humor characters.

1970 to 1971--JOSIE AND THE PUSSYCATS (CARTOON)--The band achieves fame and travels the world.

1970--JOSIE AND THE PUSSYCATS--"The Nemo's No No Affair"--When their ship sinks, Josie and the Pussycats are rescued by Captain Nemo, the great grandfather of the infamous Nemo from 20000 LEAGUES UNDER THE SEA, and likely the evil brother of the much nicer Captain Nemo who had his own cartoon during the 1960s.

December 1970--This was when a real life album was released by Josie and the Pussycats, which was a real band that was supposed to be the fictional band.  It's real members were Cathy Douglas, Patrice Holloway, and Cheryl Ladd.  No, really.  Cheryl Ladd.

1972--JOSIE AND THE PUSSYCATS IN OUTER SPACE--The Pussycats accidentally get launched into space and it takes them a few months to find their way home.

1974--JOSIE AND THE PUSSYCATS:  THE BAG FACTORY TOUR--One of their final adventures.


1977 to 1979--SCOOBY'S LAFF-A LYMPICS--First, I want to note that my first ever comic was an adaptation of this show.  And this show was one of the reasons I do what I do know (meaning write about crossovers, not studying law, LOL.)  OK, let's talk about the show.  Members of the Looniverse community decide to have a continuing  series of sporting events with three teams competing.  The first team is the Scooby Doobies.  This team consists of Scooby, Mystery, Inc, and several groups of mystery solving teenagers that are all pulled from the TVCU.  This is the first time that Scooby and the Gang are visiting the Looniverse.  They will visit often in the future.  They eventually learn of a secret way to cross over on their own.  Additionally, the constant exposure to the reality of the Looniverse has a physical effect on Mystery, Inc, causing the aging to slow down dramatically (or perhaps completely stop.)  Certainly, now, at age 60, the members of Mystery, Inc. still appear to be in their 20s.  And no dog lives that long for sure.  But not only do they remain youthful, but the Looniverse effects that they have absorbed tends to make people around them back in the TVCU oblivious to the fact they don't age and don't even notice the dog is a mutant who talks.  Back to the show, as I said, several mystery solving teens were pulled from the TVCU to be the team called the Scooby Doobies.  Scooby was named team captain.  The second team was the Yogi Yahooeys.  This team was captained by YOGI BEAR and consisted of other Looniverse residents.  Finally, the third team was the Really Rottens, led by MUMBLY.  This team consisted of bad folk from the Looniverse.  Often, OLLU AND BUZSLA were also pulled from the TVCU to be guest commentators.  SNAGGLEPUSS and MILDEW WOLF were the regular hosts.  JABBERJAW (of the TVCU) and PETER POTAMUS were frequent guest judges.  The Scooby Doobies team consisted of (all from the TVCU):  Scooby-Doo, Shaggy Rogers (Mystery, Inc.), Scooby-Dum (cousin of Scooby-Doo), DYNAMUTT, THE BLUE FALCON, CAPTAIN CAVEMAN (yup, another super-hero), THE TEEN ANGELS (Brenda Chance, Taffy Dare, and Dee Dee Skyes), SPEED BUGGY, Tinker, Babu (of the JEANIE family), and HONG KONG FOOEY.  This last one is the one member of the team who is actually from the Looniverse.  The Yogi Yahooey team consists of (all from the Looniverse):  YOGI BEAR, BOO-BOO BEAR, CINDY BEAR, HUCKLEBERRY HOUND, PIXIE, DIXIE, MR. JINKS, HOKEY WOLF, YAKKY DOODLE, QUICK DRAW MCGRAW, SNOOPER, BLABBER, AUGGIE DOGGIE, DOGGIE DADDY, WALLY GATOR, and GRAPE APE.  Finally, the Really Rottens team (also all from the Looniverse) are:  MUMBLY, DREAD BARON (later revealed to be the twin brother of DICK DASTARDLY), DINKY DALTON, DIRTY DALTON, DASTARDLY DALTON, MR. CREEPLEY, MRS. CREEPLEY, JUNIOR CREEPLEY, ORFUL OCTOPUS, THE GREAT FONDOO, MAGIC RABBIT, DAISY MAYHEM, and SOOEY.  Note that the Pussycats where also members of the Scoobies, but for legal reasons their scenes were cut from the aired version.

1982--SATURDAY NIGHT LIVE--"Blythe Danner/Rickie Lee Jones"--GUMBY references Josie and the Pussycats as being real in his reality, thus bringing in both the original Gumby and Eddie Murphy's Gumby into the Looniverse, a reality often visited by the Pussycats. Gumby often visited the TVCU during his later years.


1989—Teenage Mutant Ninja Turtles Meets Archie
This one is only slightly more insane than Archie Meets the Punisher. Here, the Ninja Turtles are brought back to earth from a meeting with aliens to score some pizza—of course they land in Riverdale. And this being an Archie crossover, Josie and the Pussycats are stopping there on their tour.  Shortly after the turtles arrive in town, Veronica is kidnapped by kidnappers (who else?), and Archie, Betty, Jughead, and the Turtles team up to save her!

1990--ADVENTURES OF FORD FAIRLANE--The case Fairlane is on involves rock bands, or somesuch, but one of the bands mentioned is The Pussycats, which has the lead singer Josie. That would be interesting enough, but the movie drops a large number of other music based crossovers. Ellen Aim and the Attackers is from the Diane Lane flick Streets of Fire (1984); Nakatomi Boys Choir is a reference to the first Die Hard movie, which took place in the Nakatomi building in Nakatomi Plaza (perhaps Mr. Nakatomi was also a boy's choir bandleader--billionares have had stranger hobbies); The Nine Sisters is a band referenced in the film Xanadu.  Another band is named Alba Varden after the bad guy's ship in Lethal Weapon 2. Perhaps the bad was inspired by newspaper reports of Riggs and Murtaugh's adventures.

1994--ARCHIE MEETS THE PUNISHER--The Punisher comes to Riverdale.  Josie and the Pussycats perform at a dance.  Besides the title crossover, Dino Manelli (from Sgt. Fury's Howling Commandos) Josie and the Pussycats, and Gotham City all appear. Dino Manelli is an interesting one. As his name implies, he's based on Dean Martin; but instead of being a look-alike analogue for Martin, Manelli is literally Martin with a lawyer friendly name. Both had hit film careers, record deals and such. The final evidence is that when Martin had the hit Dean Martin Show, Manelli had The Dino Show. Since they are one and the same (at least for TVCU purposes), Archie Meets the Punisher would have to take place before Martin's death in 1995.

2001--CARTOON NETWORK JOSIE AND THE PUSSYCATS BUMPER--A music video in which the Pussycats play their famous theme song in various musical styles through the ages.


October 2005--DRAWN TOGETHER--"Foxxy vs. the Board of Education"--Josie (from JOSIE AND THE PUSSYCATS) and Daphne (of SCOOBY-DOO) are seen solving mysteries.  Both are from the TVCU, but have found ways to access the Looniverse, which helps stop their aging.


2005 to 2006--JOSIE AND THE PUSSYCATS (MANGA)--A manga style comic series that didn't last long featured a revamped version of the characters.  The origin of the band and characters is different.  This is not Josie McCoy, but Josie Jones.  It's one of those generational things.  Just another bunch of kids who decide to steal the name of an old band and somehow don't get sued.  It could be that the name is owned by the Cabots, and thus this new Alex Cabot somehow secured it.

May 2010--ARCHIE # 608--Archie begins dating Valerie of JOSIE AND THE PUSSYCATS when their two bands are touring together.

31st Century--FUTURAMA--In a spaceship graveyard in deep space in the ship once used by the Pussycats during their outer space adventures.

It should be noted that Archie regularly crosses with (and thus not worth noting above) SABRINA, JOSIE AND THE PUSSYCATS, THAT WILKIN BOY, KATY KEENE, and the MLJ super-heroes.  Additionally, Archie and his supporting cast have appeared in hundreds of different comic titles, which you can find anywhere.
Posted by Robert E. "Robyn" Wronski, Jr. at 9:39 PM