Guest Blog: Moving On Up, Jefferson...Sorry, Wrong Jefferson: Thomas Jefferson in the TVCU

Rob, here, taking a break from writing my book, since I'm ahead of my writing schedule, to continue my updates.  The next one on the list is this blog, but since this is a James Bojaciuk blog, and James is in the process of updating his own blogs, I'm leaving this one alone. 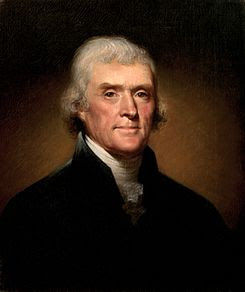 Hello shared-universe fans, this is James Bojaciuk filling in for Robert. In case you're wondering, yes: I'm the guy who did the obsessive Wonderland timeline. The handsome devil above isn't me, though.

That's Thomas Jefferson, one of our founding fathers (one of two who did not meet Bill and Ted--the other was George Washington); his ideals set the path this nation would take for most of the next 200 years. He was also probably an agent of the Illuminati, and maybe an immortal. Read on for the truth, true believers.

1764—Batman #452-454—“Dark Knight, Dark City”; Peter Milligan, and Kieron Dwyer
Thomas Jefferson travels to Gotham City with a number of other Illuminati initiates. There they are to summon a demon who shall do whatsoever they command it; but the summoning demands a blood sacrifice, and the initiates balk at the murder of a young girl they are required to commit. Something goes terribly wrong during the attempted summoning, and Jefferson and the other initiates flee for their lives. The girl is left locked in the basement of a bell tower to die.

It seems probable that Jefferson’s later antagonism to the supernatural was based on his desire to forget this event.

2006—30 Rock—“Fireworks”
Tracy Jordon discovers he is a descendant of Thomas Jefferson.

30 Rock is in the TVCU based on a crossover with LOST.

2008—Dr. Horrible’s Sing-Along Blog
The “Evil League of Evil Leaders,” or the mafia godfathers over much of the TVCU’s supervillain community, includes a man who claims to be the true Thomas Jefferson. This is argued against by his super-strength and immortality, but considering Jefferson’s prior (half-completed) deal with the devil, anything is possible. However, it is important to note that elements of the true events were greatly exaggerated.

The singing everyone suffers from, however, is probably another reality-altering appearance of the singing demon from the Buffy the Vampire Slayer episode “Once More, With Feeling.”

Dr. Horrible’s Sing-Along Blog is in the TVCU based on reused weapon and costume props from Firefly; as all of the reused props are in the possession of Dr. Horrible, we may assume he time traveled to the future and sole a number of small items. Firefly is in the TVCU via a number of crossovers with the Halo franchise, which in turn has a large amount of crossovers linking it to the TVCU via the Aliens and Predator series, Iron Man, and Mass Effect.

Mass Effect in turn has crossover links to Army of Darkness, Dracula, The Princess Bride, the Cthulhu Mythos, Hitchhiker’s Guide to the Galaxy, A Clockwork Orange, and Stark Trek (among others). All of the crossovers within Firefly, Halo, and Mass Effect will be covered in a future blog.
Posted by James Bojaciuk at 12:25 AM