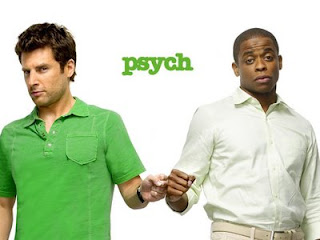 Today's blog is about Psych, initially brought into the TVCU via a bunch of USA commercials, it finally earned some more substantial crossover credentials.

I'm not a big fan of this show.  I tried it out, but it just wasn't that entertaining to me.  But, my like or dislike of a show or movie has nothing to do with what makes a valid inclusion.

1993--PSYCH:  FLASHBACK TO THE TEEN YEARS--Shawn often flashes back to his childhood, but this is a short series of flashbacks to his teen years.

July 2006 to present--PSYCH--Shawn is a detective.  Gus is his partner.  Shawn gets hired to solve crimes by pretending to be a psychic.

August 2006--USA PROMO--Shawn meets Adrian Monk.  Yes, I do include commercials if I can't find anything in it that would contradict the mythology of the actual shows.  In this one, they are in a realistic situation where both characters are true to their normal personas. 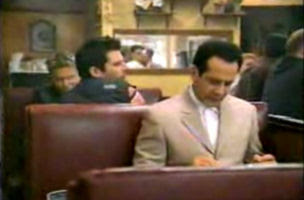 January 2009--A MIND IS A TERRIBLE THING TO READ--The first of five Psych novels written by William Rabkin.

November 2009--USA PROMO--Gus meets Neal Caffrey and Peter Burke.   Psych has had additional crossovers via these promos, including with the DEAD ZONE.

August 2010--A FATAL FRAME OF MIND--A Psych novel.  The apparent grandson of Flaxman Low met Shawn and Gus of the Psych PI detective agency.  There are a ton of references to James Bond than can be taken either way, but there are two solid crossovers and one curious reference that makes more sense as a crossover than anything else.  The first solid crossover is the Flaxman Low one I mentioned above.
"Criminals are a superstitious and cowardly lot, so my disguse must be able to strike terror into their hearts." Shawn said."What?" Gus said."Look around, Do you see anything that looks like a giant batcostume?"If Gus had been able to find a giant bat, he would have hit Shawn over the head with it. "That's not helping.""Ask the citizens of Gotham City, I think you'll find they disagree." (233)
December 2010--PSYCH--"Dual Spires"--Since I know little about either shows in this crossover, I will turn it over to two of my expert cohorts.  Click here to read what both Toby O'Brien and Sean Lee Levin have to say about the Psych/Twin Peaks crossover.

February 2011--MIND-ALTERING MURDER--The final (so far) Psych Novel.  All the novels were written by William Radkin.

March 2013--PSYCH--"100 Clues"--Christopher Lloyd makes comments about how it's all happening again. Since we never learned the true name of Professor Plum in Clue--the various names were handed out by Wadsworth in the opening minutes--it's a solid crossover. Professor Plum is Martin Kahn.

May 2013--PSYCH--"Office Space"--Shawn talks about Jack Bauer very much as if he were a real person.

This month wraps up a half a year of the TVCU blog (after decades of false starts that evolved into this blog).  In addition to writing new blogs when I get back, I will also start updating the blogs I wrote.

(I will still be checking in on Facebook, so feel free to keep the discussions going and I will join in there.)
Posted by Robert E. "Robyn" Wronski, Jr. at 9:56 PM