This blog is spooky and it's creepy...and timely...

OK, enough promotion, lets move onto the blog.  The Addams Family is complicated.  When researching this, I've had to think, is this one long lived family?  Is it different families?  I think I solved my problem.  We'll see.

Oh, and based on Google Analytics, my most popular blogs involve super-heroes, cartoons, or have pictures.  This will have all of those, so this one should rock.  LOL

Oh, and I want to add that I met the actress who played Wednesday Addams at Spooky World back in the early 90s, and got her autograph, but sadly that signed photo was destroyed when my mom's basement flooded. 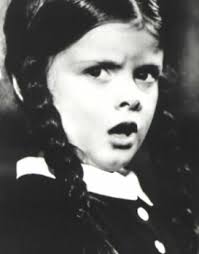 Sadly I wish I could have also met Morticia.  ;-) 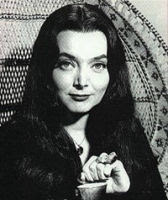 1962--THE ADDAMS FAMILY--I'm placing the 1991 film here, in my tradition of making film remakes into prequels.  Just ignore the pop culture and tech references.  Otherwise it fits perfectly.

1962 to 1965--THE ADDAMS FAMILY--This is the early 1990s animated series, which is based on a combination of the film, the original series, and the comic strip.

1963--ADDAMS FAMILY VALUES--This may provide a link to the revival live action series.  Pay attention to the ending.

1966--THE ADDAMS FAMILY--In one episode, that I can't place, Gomez Addams gets bonked on the head and suddenly takes the identity of the Riddler, revealing that the second Riddler on the Batman TV show played by John Astin is Gomez Addams.


1969--THE STORYBOOK SQUARES--Morticia appears on this game show along with MR. MAGOO.

December 1971--THE NEW SCOOBY-DOO MOVIES--"Scooby-Doo Meets the Addams Family (aka Wednesday is Missing)"--The title says is all. 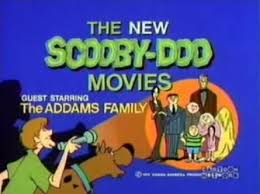 1973--THE ADDAMS FAMILY FUN-HOUSE--The family tries to host a musical variety show, but it doesn't make it past this unaired pilot.


1973 to 1975--THE ADDAMS FAMILY--There's no reason not to include this animated series which continues in the style of the 1960s series and is drawn like the version from the Scooby-Doo meeting.


October 1977--HALLOWEEN WITH THE NEW ADDAMS FAMILY--Reveals that Gomez and Fester have another brother named Pancho, and that there are two new children, Puggsley Junior and Wednesday Junior.


Late 1980s--SOCIETY OF UNORDINARY YOUNG LADIES--A still young Wednesday has developed powers and is recruited to join a team with PUNKY BREWSTER and Evie Garland (OUT OF THIS WORLD).  LASSIE is also on the team.  Their mission is two rescue the girls of FACTS OF LIFE.  Their boss is Charles (CHARLES IN CHARGE) and his boss is Ricky Stratton (SILVER SPOONS.)  The duo from BOSOM BUDDIES and Kimberly Drummond (DIFF'RENT STOKES) as well well as the characters from NIGHT COURT also appear.  (I may be missing something.  Feel free to check and let me know.)  Fun series, but I wonder why it ended after four issues, after getting good reviews. This might fit in the tvcu but there are some things that don't fit. This would negate the facts of life reunions. Drummond didn't die in the 80s. He was in the fresh prince. Ricky Stratton should be the same age as the other kids, not an adult. The Addams family depicted is drawn like the 60s version but would have to be the 80s version. All the series referenced would have to have ended prior to Chernobyl. And I have to look up if curly Horton is supposed to be significant.


1989--FESTER'S QUEST--Uncle Fester tries to save the world from aliens.


1994--The family goes to Japan where they really love the new Honda.

1998 to 2000--THE NEW ADDAMS FAMILY--Despite being a remake of sorts, I believe this is a different family.  John Astin (who was the original Gomez) plays Grandpa Addams (no first name given) which may imply that the Gomez Addams of the new series is the son of the original, i.e. Gomez Addams Junior.  And it would be just like an Addams to marry someone just like his mother and have kids just like his siblings.  Of course, there is then the implication that Gomez Addams Junior may in fact be Pugsley Addams.  Of course, there is also the possibility that the new Morticia is Wednesday, and that this new Gomez is actually a boy she met long ago in summer camp who fell for Wednesday and even began acting like Gomez.


BROADWAY UNIVERSE--There is currently a musical based on the comic strip.  It may fit within the TVCU, but since I don't have enough info, I have to place it here for now.  This version of the family has appeared on THE LATE SHOW WITH DAVID LETTERMAN.


"Sure tell Christmas is coming round;
everybody gets kiss-happy!"Uncle Fester'The Addams Family'
Posted by Robert E. "Robyn" Wronski, Jr. at 4:20 PM