Yes, Supernatural is in the TVCU...

Supernatural has been mentioned within my blogs for some time, yet I'm asked often about the inclusion of the series.  Finally I've gotten to writing a blog on the subject.  I will thank Ivan for providing me with much of the information that I will be using.

1830s--SAMUEL COLT--There was almost a prequel series which would feature Colt as a monster hunter.

March 15, 1937--SUPERNATURAL--Horror author and researcher into the Cthulhu mythos H.P. Lovecraft is killed by a demon in his study. 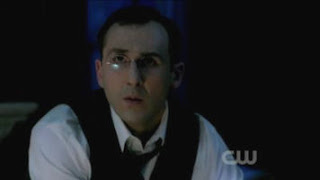 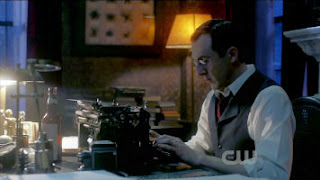 2000--SUPERNATURAL:  RISING SON--Comic series covering Dean's beginning to become a monster hunter on his own.

2001--SUPERNATURAL:  BEGINNING'S END--Comic series tells the events in which Sam left for college.

2002--CALEDONIA--An adventure of Sam visiting England while in college.


2005 to 2007--SUPERNATURAL:  THE ANIMATION--Anime series that was produced recently but occurs during the first two seasons.  In fact, it retells many of the stories, but it adds more childhood flashbacks and
gives more screen time to supporting characters.


March 2006--SUPERNATURAL--"Hell House"--The urban legend website Hellhounds Lair featured in the Season One episode "Hell House" is a real website set up by the show's producers.[137] As a tie-in to the sequel episode "Ghostfacers", in which the owners of Hellhounds Lair create their own Ghost Hunters-style reality show, The CW set up Ghostfacers.com.[138] The Winchesters later visit this website in the fourth season episode "It's a Terrible Life".


2006 to 2011--SUPERNATURAL--Ivan Ronald Schablotski Regarding Death, I recommend considering that many beings known as "Death" are actually Reapers, as seen on SUPERNATURAL (which are very different from the Reapers seen on the show REAPER). Reapers work for Death, rather than Heaven or Hell, but seem synonymous with most takes on Angels of Death (like on the series TOUCHED BY AN ANGEL, the movie CITY OF ANGELS, etc.).  (on SUPERNATURAL) Death was a Horseman of the Apocalypse serving Lucifer ONLY because Lucifer had a binding spell that gave him a very limited control of Death. Since Season 7 had the angel Castiel become the new God, and angels on that show can definitely die, it's not unreasonable to see an interpretation that 'God' will be claimed by Death that does not violate the concepts of monotheistic GOD being rather above all that.

However, I will say that many supernatural and mythological creatures and villains have been handled in ways I find very frustrating on SUPERNATURAL. Rakshasha and Kitsune in particular were grossly misrepresented, IMO. And don't get me started on the idea that the gods of Olympus would willingly eat human flesh.

Robert Wronski
So here is my philosophy regarding religion, philosophy, and supernatural beings. First, there are many things of a godly nature that will never comprehend. Second, there are some supernatural beings that will pose as more famous beings. Finally, some creatures actually have many subspecies, explaining differences. So the devil isn't always the devil. God moves in mysterious ways based on his plan. And not all vampires are the same. If win had put too much thought into this area the cu would not exist. That's how I justify making supernatural part of the tvcu based on solid crossovers rather than does their mythology match up with others.

February 2007--SUPERNATURAL--"Tall Tales"--
The second season episode "Tall Tales" featured a tie-in to that week's issue of the tabloid newspaper Weekly World News. The February 19 and March 19, 2007, editions of the paper featured exclusive interviews with Sam and Dean, the articles being written by Paul Kupperberg.[141][142]'


October 2007--SUPERNATUAL--"Sin City"--In the series Supernatural, Lucifer is first discussed in the season 3 episode "Sin City". In the episode, a demon refers to him as the god of the demons, who made them what they are.


February 7, 2008--SUPERNATURAL--A reference is made to Krueger, and it is not clear if it implies they know of his existence, or if they have just seen his movies.  Remember, in the TVCU, especially at this time, Springwood has worked hard to erase any evidence of Krueger's existence.  However, he has become an urban legend (and films have been made about him based on those legends.)

July 2008--FRIDAY THE 13TH--More teens are slaughtered by Jason.  Even though this is meant as a reboot, in my opinion it fits in just fine as a sequel. Crazy Ivan said... With this in mind, I then put the new F13 movie in that same month (it had to be in the summer, so it should have been before the Feb 09 release), and I assume that the characters Clay Miller (played by Jared Padalecki) is actually Sam Winchester, who is monster-hunting solo that summer while his brother is in Hell. Sam Winchester uses aliases all the time, and his trip to Crystal Lake could have been to find the daughter of a fellow hunter.  In the TVCU, same actor / same character would be impossible, but there are a few chases where I still support it. Clay Miller is not likely to be a reoccuring character, and his use as a guise for Sam Winchester allows me to fill in part of the time that Sam was hunting monsters alone, so I support it. The only other example I can recall would be Bill Maxwell, the agent who helped Ralph Hinkley use the super-suit. I feel justified in thinking of Bill as an identity used by agent Kelly Robinson.


September 2008 to May 2009--SUPERNATURAL--Season 4 deals with the demons' attempts to break 66 seals which would allow Lucifer to walk the earth and unleash hell.


May 2009--SUPERNATURAL--"Lucifer Rising"--The season finale ends with the final seal being broken and Lucifer breaking through the ground.


September 2009 to May 2010--SUPERNATURAL-- In Season 5, Lucifer is portrayed by Bellamy Young, Adrianne Palicki, andJared Padalecki, but primarily by Mark Pellegrino. Lucifer claims to have been cast out of heaven for defying God's wish to love mankind more than their Lord and attempts to earn sympathy from the audience. However; through the course of the show it is revealed that Lucifer's actions are merely out of spite for his Father and brothers, specifically his elder Michael. It is Lucifer's desire to eradicate mankind and eventually the demons too, allowing him to rule the earth according to his design.


May 2010--THE UNHOLY CAUSE--A Supernatural novel.

Another fun fact for this article (I'd add it myself, but I'm unsure just what realities you'd want this to go in).

The planet Pandorum is mentioned by the angel Gabriel (in his guse as Loki) during a 2010 episode of SUPERNATURAL as a place he wishes to go with the goddess Kali to escape the war between heaven and hell taking taking place on Earth. I consider SUPERNATURAL to be part of the TVCU via appearences by Spengler and Zeddemore (albeit not THE Spengler and Zeddemore of GHOSTBUSTERS fame) and Lovecraft's Old Ones, but I don't think that's 'official' anywhere.

Note that this http://cartoons.ashtonpress.net/toonarama/supavatar.jpg
is NOT the crossover between Supernatural and Avatar.

Early 2011--SUPERNATURAL--"Bewitched"--This one is Apocryphal.  It is from a script that never made it to the screen, and never will, but I include it for the sake of completeness.  First, I should explain something that the original series included as part of the mythology of the 5th dimensional witches.  When a witch is ready to die (because he or she is tired of living), they transform themselves into something else useful, in which they still live on immortal and sentient, but as an inanimate object.  (Yeah, doesn't make sense, does it?  But who are we to argue with the logic of highly advanced beings?)  So in this episode, someone is going after the Witch's Council, and the Winchester Brothers have to protect a witch named Lizbeth Elspeth.  Lizbeth is the granddaughter of Samantha Stephens and the daughter of Tabitha.  Samantha has been turned into a TV remote and can speak to the boys through any monitor within range of the remote.  Samantha, Tabitha, and even Doctor Bombay (the family witch doctor) assist and advice the boys.  In the end, though, it turns out Lizbeth is the bad guy.  We also learn that Tabitha had also married a mortal like her mom.


February 2011--SUPERNATURAL--"The French Connection"--Crazy Ivan said...  Not EXACTLY a crossover, but since you mentioned the Winchester Brothers on this blog, I'll mention that they recently traveled to Earth-Prime, where magic doesn't work, they are portrayed by actors who don't like each other much, and the apocalypse never happened. So, despite having not met Freddy, they have mentioned him AND they have traveled to the same alternate reality he did.  In the episode, Robert Singer, writer/director/producer, is played by Brian Michael Murray.  But the episode really is written by Robert Singer.


Sam Winchester as Jared Padalecki:
"For whatever reason, our lives are a TV show."

Dean Winchester as Jensen Ackles:
“Why would anybody want to watch our lives?”

Sam Winchester as Jared Padalecki:
“Well according to the interviewer, not very many people do.”'SUPERNATURAL' 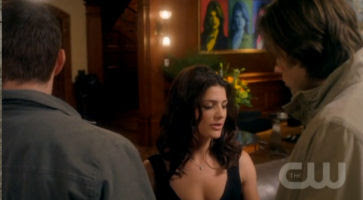 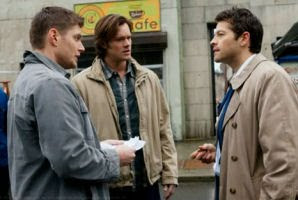 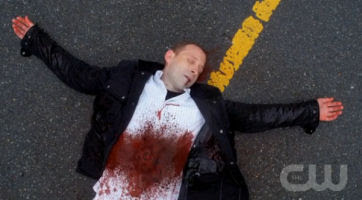 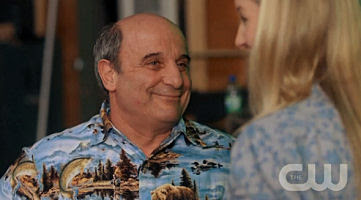 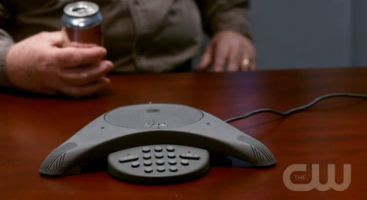 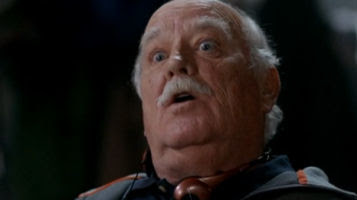 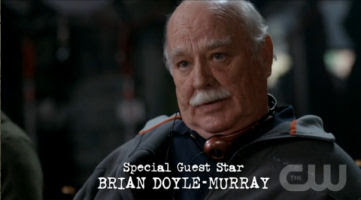 
2011--SUPERNATURAL--Crazy Ivan said... This may not be a legit crossover, but in the current season of SUPERNATURAL, an unnamed book, bound in human flesh, contains passages revealing how to open a portal to the realm of monsters and summon forth the Mother of All Monsters to the mortal plane.

And while we're talking SUPERNATURAL, I'll point out that the Winchester boys come from a long line of monster-hunters in the Campbell family. Perhaps the TVCU BRuce Campbell is one of them, explaining why he was able to effectively fight Guan Di... as well as the Frankenstein Monster (according to reports of the upcoming sequel to MY NAME IS BRUCE)
http://www.imdb.com/title/tt1587306/

SKITLANDIA: In the SUPERNATURAL episode “Changing Channels” The Winchester brothers are placed into scenarios that parody Japanese Gameshows, sitcoms, Grey’s Anatomy, CSI Miami, and knight Rider. In the Knight Rider Parody, Dean acts as Michael Knight and Sam’s spirit animates their Chevy Impala. The Impala has the K.I.T.T. scanner and voice box.


Ivan, I hope you approve.  You too, Kevin.  ;-) If you see I missed anything, please feel free to fill in the blanks, change dates, make corrections, ect.  You practically co-wrote this with me anyways.
Posted by Robert E. "Robyn" Wronski, Jr. at 6:37 PM