This blog is going to be about Zorro.  Zorro is a character who originated in literature, and thus I am only going to be focusing in Zorro's television and film appearances, particularly the crossovers.  That doesn't mean his print works aren't in.  They indeed are.  But it's not the focus of this blog.  (Actually, I am going to add some literature related crossovers, particularly if they are horror related, because why not?  In 2014, I will be lightening up on my stance regarding literary inclusions.  Because why not?) 1771--Birth of Don Diego de la Vega, future Zorro.  His father is Don Alejandro de la Vega, who had a cousin named Ebardo de la Vega.  Ebardo will be the grandfather of future villain Dr. Miguelito Loveless (from WILD WILD WEST.)  This theory was created by Jess Nevins, and has been added to by Toby O'Brien here. James and Gordon take note, it involves a renegade Time Lord and Fantasy Island.  More on the theory here. 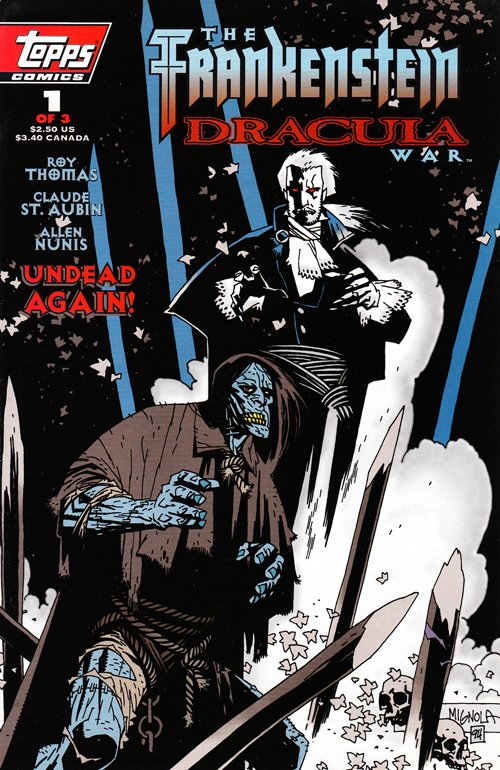 1796--THE FRANKENSTEIN/DRACULA WAR # 1 - 3 (TOPPS COMICS)--The Monster is trying to live an ordinary life among humans when the Count de Saint-Germain blackmails him into attacking Dracula. It’s a TVCU rule here to keep versions of Dracula and the Monster separate based on the author or comic book company.  The Topps Dracula is brought in via a reference in Spike Vs. Dracula to Dracula’s battle with Zorro.  Because of this, this could be the same Dracula from Buffy the Vampire Slayer.  However, seeing as how Jean-Marc Lofficier is a co-author of this tale, the Topps Dracula is more likely the same Dracula from Bram Stoker’s novel.  The Count de Saint-Germaine was a real historical figure who claimed to be immortal, thus does not count for crossovers.  Likewise, Dracula’s mention of the Golem from Jewish folklore does not count as a crossover. Summer 1807--ZORRO--"Zorro and the Mountain Man"--Zorro comes to the aid of mountain man Joe Crane (a character from THE SAGA OF ANDY BURNETT).

1809--ZORRO RIDES AGAIN--Zorro must come out of retirement when a criminal poses as him.

1810--THE SIGN OF ZORRO--Zorro rides again, and although mourning the loss of his love, becomes engaged once more. 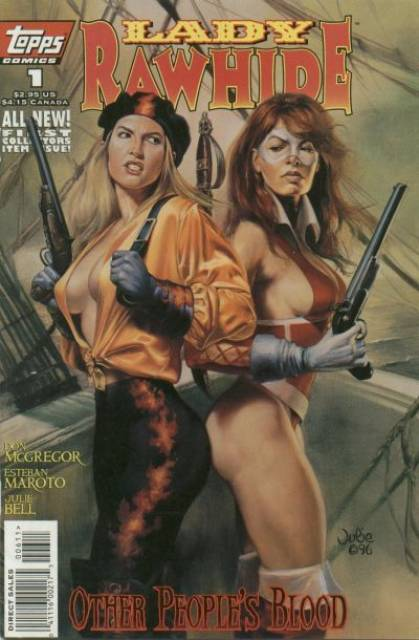 1810--LADY RAWHIDE # 1- 5 “OTHER PEOPLE’S BLOOD” (TOPPS COMICS)--Lady Rawhide deals with pirates and a vampire on the high seas. The vampire in question is Carmelita Rodriguez, a god fearing woman who had previously been turned into a vampire by Dracula in Dracula Vs. Zorro.  Lady Rawhide was a spin-off character of Topps’ Zorro series.  Note that this was meant to be an eleven issue story, that ended at issue five.  The story was never concluded.

Summer 1815--THE DAUGHTERS OF ZORRO--Win Scott Eckert says that Zorro II is imprisoned in this film, and that's all I know.

1819--ZORRO--"One for All"--Zorro travels to France where he meets the descendants of the legendary THREE MUSKETEERS.

1820--DRACULA VS. ZORRO # 1 - 2 (TOPPS COMICS)--While in Spain, Zorro encounters Dracula. The TVCU rules for crossovers treat each comic book version of Dracula separately.  This story was referenced in Spike Vs. Dracula, which is what brings it into the Television Crossover Universe, and may imply that the Topps Dracula is the same Dracula from Buffy the Vampire Slayer.  However, another Topps Dracula tale is written by Jean Marc Lofficier, which may imply that this is the same Dracula from Bram Stoker’s novel.

1824--ZORRO'S FIGHTING LEGION--Diego forms a legion to prevent an assassination attempt on the president of Mexico.

1830--ZORRO AND SON--Diego takes on Don Cesar as his apprentice.

1853--THE MASK OF ZORRO--Diego trains Alejandro Murieta to become the next Zorro.

Summer 1859--A FATE CAST IN SILVER--Story by John Small in the anthology DAYS GONE BY:  LEGENDS AND TALES OF SIPOKNI WEST.  In this tale, Elena (Tiberius) Mason (from THE MASK OF ZORRO and THE LEGEND OF ZORRO) is a school teacher and one of her students is John (Tiberius) Reid, the future LONE RANGER.  (OK, I'm done with the Tiberius joke.  Promise.  I'm not sure what possessed me to keep doing it.  Perhaps because I've had a very long day and I'm tired, or because I'm watching the Office.  I don't know.) 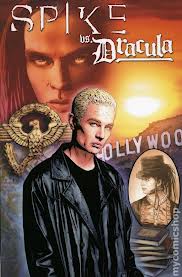 many time periods from the 19th century up to the final season of Angel--SPIKE VS. DRACULA (IDW PUBLISHING)--It is revealed that the gypsy tribe that cursed Angel and then was slaughtered by Spike, Dru, and Darla was the same tribe that was favored by Dracula.  Though Dracula wouldn’t learn of Angel’s involvement for some time, he became an instant and unlifetime enemy of Spike, and this rivalry led to present day. This Dracula here is not necessarily the Dracula of Stoker’s novel, though he claims to be.  However, he does seem to be the same Dracula seen in the film “Dark Prince:  The True Story of Dracula” which would imply he is the same Dracula.  It may be he is indeed, but he may just as well be a soul clone with delusions of being the real deal.  (If so, True Story may be his false memories.)  I leave it up to each individual reader to make their own interpretation, but for crossover purposes, appearances of this Dracula make a Buffy crossover, but not a Dracula crossover.  But there are other crossovers in this book.  In the late 19th century, Spike inspires the customers and staff of an inn called the Slaughtered Lamb to grab their pitchforks and torches and storm Dracula’s country home.  The Slaughtered Lamb appears as an important setting in the film “An American Werewolf in London”.  In the modern setting, in Spike’s final fight with Dracula, he mentions that Dracula has also fought Frankenstein, the Wolf Man, King Arthur and Zorro.  Spike is probably not aware of soul clones, and believes his rival to be the one and only Dracula.  In battling the Frankenstein Monster and the Wolf Man, he is likely confusing this Dracula with the soul clone Armand Tesla (aka Dr. Leighos/Latos) from the Universal films.  Dracula fought King Arthur in a Silent Devil Productions comic book mini-series, and Zorro in a Topps Comics Mini-series.  Though Joss Whedon’s Dracula is too different to be the same as the Universal version, it’s not improbable for him to be the same guy who fought Zorro and King Arthur.  Finally, this mention brings Zorro’s original stories and Topps series into the Television Crossover Universe.  King Arthur is a legendary figure so does not count for crossovers.

Spring 1967--Tarzan, from Tarzan, Lord of the Jungle, Tarzan and the Super 7 and the Tarzan/Lone Ranger/Zorro Adventure Hour--"Tarzan and the Island of Dr. Morphos"--The second was the episode entitled Tarzan and the Island of Dr. Morphos.  Though it was originally broadcast on October 14, 1978, the story actually occurred in the Spring of 1967.  Most people in the TVCU think, just as we do, that Tarzan is fictional.  But the truth is that writers, starting with Edgar Rice Burroughs, base their stories partly or wholly on second hand accounts, or from the man himself.  This is the basic concept for the whole of the TVCU, and explains away what Toby O'Brien calls "zonks."  Whenever someone is real, but is thought to be fictional, or there is a show mentioned that shouldn't be, it's because either the world is made to think someone is fictional, while the accounts are true, or in the case of some movies or TV shows, someone "stole" the lives of others and sold those stories without permission, or it's a reality show, not a ficional show, being referenced.  Anyways, in this second crossover, Tarzan encounters the descendant of Doctor Moreau.  Reformatted to match the format I currently use but hadn't yet adapted when I wrote this blog.

October 1998--CAROLINE IN THE CITY--"Caroline and the First Date"--A man in New York poses as Zorro. SIMPSONS--"E-I-E-I-(Annoyed Grunt)"--In this Simpsons episode, they are watching a film called "The Poke of Zorro", in which Zorro travels to France to rescue King Arthur who had been kidnapped by the Man in the Iron Mask. He must battle the Three Musketeers and also takes on the Scarlet Pimpernel who had been sleeping with Zorro's lover. Definitely not canon anywhere, but very fun little clip.
Posted by Robert E. "Robyn" Wronski, Jr. at 1:31 AM