Today's blog topic covers yet another cartoon, but it's not in the Looniverse.  It's in the TVCU!!!

And yes, there's some explaining to do.  First, it's one of those cartoons that is on for years but they don't seem to age.  Well, consider this.  Each story takes place in one single afternoon of the summer.  That allows for about 104 summer days per year, or 104 stories per year.  Thus, if we take every story as being one afternoon a day during a summer, then realistically, they are aging, but the stories are being televised to us on a spread out schedule.  And if you don't like that answer, then I point you to M*A*S*H, and say if you can accept M*A*S*H, then you can accept a cartoon's timeline.  So there.

The other issue is a secret agent platypus, and that's actually not to hard to explain.  First, this is not a world where people just accept anthropomorphic talking intelligent animals.  The platypus in question is a pet who has to play dumb most of the time.  His owners don't know about his dual identity.  So clearly, he is some mutant, likely created or mutated by the government to which he serves.  But after all, intelligent animals aren't completely anomalous to the TVCU.  Look at Scooby-Doo, for example.

The final issue I guess would be that these two kids are intelligent at a level comparable to perhaps the Doctor. It's not explained why.  But they do incredibly amazing things each afternoon that escape the notice of their parents, much to the annoyance of their sister.

Oh, and note that even the title sequence contains a crossover...  The duo have encountered one of the Frankenstein monsters at some point early on in their adventures.  And a mummy that may have been Mummy X!!!

27,000 B.C.--PHINEAS AND FERB--"Tri-Stone Area"--This tale takes place in Dansville of prehistoric times, in a culture less technologically advanced than Bedrock of 52,000 B.C. but clearly some of Bedrock culture survived to this point.

1100--PHINEAS AND FERB--"Excaliferb"--During medieval times, Phineas and Ferb (or, Ferb-a-lot) set off on an epic quest to find the legendary sword, Excaliferb, so they can defeat the evil sorcerer, Malifishmirtz.

Summer 2007--PHINEAS AND FERB (Episodes 1 - 104)--Phineas and Ferb are extremely intelligent 10 year old step brothers who constantly seek out a new adventure each afternoon of the summer.  The fact that their parents are ignorant of the weirdness around them is an annoyance to their 15 year old sister.  Meanwhile, their pet platypus is only pretending to be normal as he really is a secret agent, constantly thwarting an evil scientists plans every afternoon. 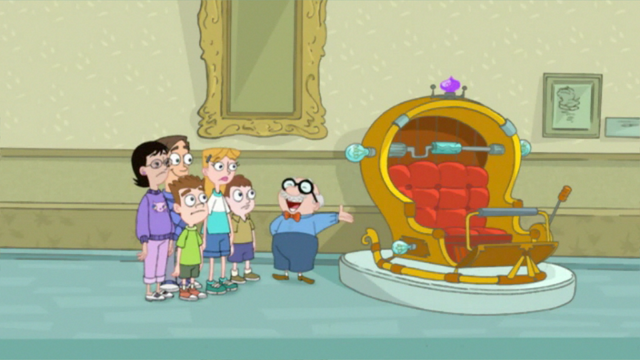 Summer 2008--PHINEAS AND FERB ACROSS THE 2ND DIMENSION--The duo end up using the mad scientist's invention to travel to an alternate Mirror Universe, where they meet their other selves and learn that their pet is a secret agent.  The cause of the Mirror Universe is always misleading. Often, people visit it when they are being shown a glimpse of a life that could have been, such as "What if I was never born?" or "What if I don't change my ways?" or "I wish so and so never came to this town" and people then assume that this world is created by said angel, ghost, or demon, when really they are merely being transported to another world where those events occurred. It's likely that Phineas & Ferb mirror reality is THE Mirror Reality, but is only seems as if it's the cause of one being. (And I place Phineas & Ferb in the TVCU despite it's animated style, because of solid crossover ties.)

Summer 2008--PHINEAS AND FERB--Upcoming film that will mix animation and live action.  Potentially there will be crossovers, but the film is still being rewritten at this time.

Summer 2008--PHINEAS AND FERB/ED EDD N EDDY CROSSOVER--Fan made film, this got picked up by Disney XD and Cartoon Network and was aired on both networks.  Note that Ed, Edd and Eddy are from another reality within the story (the Looniverse).

Last Day of Summer 2008--PHINEAS AND FERB: THE BEST LIVE TOUR EVER--The two try to make the most of the last day of summer.


2009—Phineas and Ferb—“Elementary, My Dear Stacy”--The Flynn-Fletcher family goes on vacation in England. Bored beyond all comprehension, Candace reads all the Sherlock Holmes stories. Candace being Candace, she uses her newfound “talent” for deductive reasoning to bust her brothers. It doesn’t end well.  While tracking her brothers all about London, Candace passes a man dressed in Victorian finery. An exceptionally befuddled man dressed in Victorian finery. One wonders if this is the Watson tulpa. There's no evidence, but, perhaps, just perhaps, it's him.  A 00-agent also appears.

July 2010--PHINEAS AND FERB--"Phineas and Ferb:  Summer Belongs to You!"--On the deserted island, Phineas digs through the sand and finds a sponge and a starfish that are similar in appearance to SpongeBob and Patrick.

December 3, 2010 to Present--TAKE TWO WITH PHINEAS AND FERB--The duo get a talk show.  Note that this must take place in the present as it involves contemporary celebrity interviews.  The show would then start with the two now being 13, even if they look unaged.  Which means now they are 15, even though looking unaged.  (They are waiting for their growth spurt.  When I was 16, I was only 4'11", so this isn't unrealistic.)  Note their age is derived from when they travel 20 years in the future, at which time their mom states they are both 30.

February 2012--TAKE TWO WITH PHINEAS AND FERB--Miss Piggy comes on the show to plug the new MUPPETS film, which is based on their recent comeback.

MAD--Demonstrated to be an alternate reality in the Television Crossover Universe in Batman: the Brave and the Bold.  They have parodied Phineas and Ferb several times.

PHINEAS AND FERB/STAR WARS--An amalgamation of the two, similar to the Family Guy Blue Harvest episodes.

So that's about it.  Just to wrap up, I offer some purely conjectural observations.  First, note that Dr. Doofenshmirtz went to an evil medical school, and his company is called Doofenshmirtz Evil, Inc.  Could Dr. Evil be his silent partner, (as he's always off frozen in space?)

My second observation is that the evil doctor resembles one of Doctor Claw's evil scientist henchmen from MADD.  Perhaps he got his start there before branching off on his own.