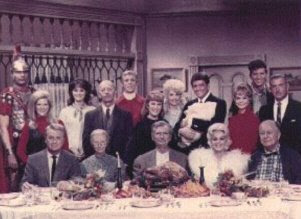 Back in the 60s, a trend occurred in television that would be later revisited in recent years with the Blue Collar Comedy craze.  Back then it was all about hillbillies.  I was a huge fan of these shows as a kid when they were in reruns, and am very glad they are part of the Television Crossover Universe.

World War II--GREEN ACRES--"Wings over Hooterville"--During his time in the military, Oliver is told if he should find himself captured, he should seek out a Colonel Hogan (from HOGAN'S HEROES).

1962 to 1971--THE BEVERLY HILLBILLIES--Jed Clampett finds oil on his land and becomes rich, and is convinced to move his family to Beverly Hills.  Hilarity ensues in this fish out of water tale of country bumpkins in the big city.  (Actually, just watch the video.  Back then, the theme songs were pretty good at laying out the whole premise for you.)

1962--BEVERLY HILLBILLIES--I know people hate me for this, but I'm placing the remake film here, taking place at the same time as the first season of the show, with the TV version taking precedent when there are contradictions.  Basically, the film adds extra plotlines to the Clampetts first year in Beverly Hills.  Why even include it?  Because they slyly threw in a BARNABY JONES crossover, where the detective is hired by Granny to investigate a gold digger.  Note President Clinton is referenced as being a kin to the Clampetts, and this may still be true, though obviously he wasn't president yet in 1962.

1963 to 1970--PETTICOAT JUNCTION--The story of a hotel at a train stop in the town of Hooterville.  Petticoat Junction was set in the same fictional universe as the rural television comedy Green Acres, also set in Hooterville. Both shows shared such characters as Sam Drucker, Newt Kiley, and Floyd Smoot. A number of core Green Acres characters, such as Fred and Doris Ziffel (originally Fred's wife was named Ruthie)[5]), Arnold the Pig, Newt Kiley, and Ben Miller, first appeared onPetticoat Junction in the 1964–1965 season, which saw a number of scripts written by Green Acres creator Jay Sommers. Characters on all of Henning's creations sometimes "crossed over" into one another's programs, especially during the first two seasons of Green Acres. In a 1968 episode ("Granny, the Baby Expert"), Granny from The Beverly Hillbillies comes to Hooterville to tend to Betty Jo and Steve's baby. Granny looks at a picture of Kate and is astonished at her resemblance to Jed's cousin, Pearl Bodine (previously played by Benaderet), and prior to her visit to Hooterville, reminded Jed that he was related to Kate through Pearl. Other crossover shows include one where the Clampetts, Milburn Drysdale, and Miss Jane spend both Thanksgiving and Christmas of 1968 in Hooterville on The Beverly Hillbillies and a 1970 episode of The Beverly Hillbillies in which Mr. Drysdale thought that billionaire Howard Hughes lived in Hooterville (the man turned out to be Howard Hewes, who owned Hooterville real estate, including the field Steve Elliot rented to maintain his crop plane.). A list of episodes featuring characters from Green Acres can be seen on this page.

The following is a list of Petticoat Junction episodes featuring characters from Green Acres. Only those that debuted on Acres before Junction are counted.

Petticoat Junction was the only one of Henning's country trio not to be brought back for an updated reunion movie. The character of Sam Drucker, however, did appear in Return to Green Acres in 1990. November 1963 to October 1964--DICK VAN DYKE SHOW/BEVERLY HILLBILLIES--"Who and Where was Antonio Stradivarius?/Jed Becomes a Movie Mogul/Clampett City/Clampett City General Store"--A character that starts on one show becomes a recurring character on the other.  Don't believe me?  Check out Toby's 'splaining. 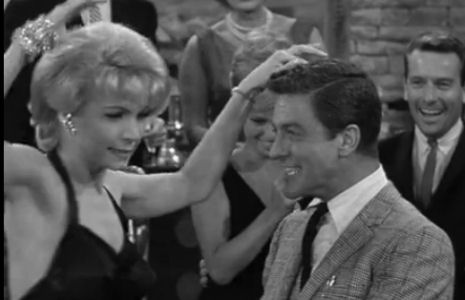 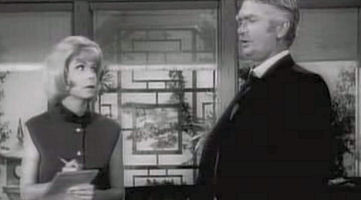 1964 to 1965--BEVERLY HILLBILLIES--Jed temporarily owns Mammoth Studies, a film studio (fictitious to us in our "real" world) that has also appeared in THE LUCY SHOW, THE MONKEES, BOMBSHELL, ABBOTT AND COSTELLO IN HOLLYWOOD, MERTON OF THE MOVIES, THE WOMAN CHASER, ELEMENTARY MY DEAR GROUCHO, RANG-A-TANG THE WONDER DOG, TOWER OF SHADOWS and IT TAKES A THIEF.

1965 to 1971--GREEN ACRES--The opposite fish out of water story, when New Yorkers move to Hooterville (right near the hills where the Clampetts came from.)  Ironically, Oliver wants to move while his lovely wife wants to stay in the city, but once they get there, she adapts well, while he is driven nuts each week by the locals.  (Again, watch the video.  It sums it all up.)

The following is a list of Green Acres episodes featuring characters from Petticoat Junction. Only those that debuted on Junction before Acres are counted. October 1965--MISTER ED--"Love and the Single Horse"--When the talking horse, Mister Ed, runs away to a wax museum, he encounters Granny Clampett. 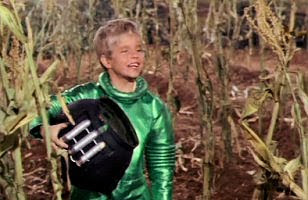 1981--RETURN OF THE BEVERLY HILLBILLIES--The film's plot had Jed back in his old homestead in Bugtussle, having divided his massive fortune among Elly May and Jethro, both of whom stayed on the West Coast. Jane Hathaway had become a Department of Energy agent and was seeking Granny's "White Lightnin'" recipe to combat the energy crisis. Since Granny had gone on to "her re-ward", it was up to Granny's centenarian "Maw" (Imogene Coca) to divulge the secret brew's ingredients. Subplots included Jethro playing an egocentric, starlet-starved Hollywood producer, Jane and her boss (Werner Klemperer) having a romance and Elly May owning a large petting zoo. The four main characters finally got together by the end of the story.


October 1989--THE SUPER MARIO BROS. SUPER SHOW!--"Mario Hillbillies"--The Super Mario Bros. meet Ellie May Clampett.  Really.  Same actress, playing same character.  Note the Marios are from the TVCU and migrated to the Looniverse.  However, they still move back and forth freely through portals located in sewer pipes.


1990--RETURN TO GREEN ACRES--In the 1990 reunion TV movie Return to Green Acres, a twenty-something Arnold survived his "parents", and subsequently bunks with his "cousin", the Ziffels' comely niece. (In reality a pig life span averages 12–15 years, similar to a dog). The film was made and set two decades after the series. The Monroe Brothers still have not finished the Douglas' bedroom. In the movie, Oliver and Lisa have moved back to New York, but are miserable there. They are implored by the Hootervillians to return and save the town from a scheme to destroy it, cooked up between Mr. Haney and a wealthy, underhanded developer (Henry Gibson). With a nod to the times, Haney's latest product is a Russian miracle fertilizer called "Gorby Grow".


OLD TIME RADIO UNIVERSE--The Granby's Green Acres radio show aired from July 3 to August 21, 1950. The show was produced, directed and written by Jay Sommers, who wrote and produced a third of the Green Acresepisodes. In both, a businessman knowing little about farming moves to an impoverished farm. The characters are more conventionally odd, the wife stereotypically talkative and dim, the "Sam Drucker" character senile, the hired hand stoic about the incompetent management.[3]
Posted by Robert E. "Robyn" Wronski, Jr. at 2:50 AM