A special mid-week post because I'm bored and my mid afternoon nap means staying up late.

When I first started the TVCU blog, I had stated in several blogs that Scrubs was in it's own self-contained reality (well, and Toobworld, of course.)  Since then, Ivan pointed out to me that Scrubs does have a connection to Lost (one of the nexi of TVCU connectivity; see the crossover timeline below.)  And then Ivan later pointed out to me the multiple connections between Scrubs and Cougar Town.  So, as someone who while unemployed watched every Scrubs episode on Comedy Central every morning, afternoon, and evening (between Mad TV and Comedy Central Presents), I'm pleased to present this blog.

December 2002--IT'S A VERY MERRY MUPPET CHRISTMAS MOVIE--Kermit loses the theater, and his friends rally to help.  Kermit is having an "IT'S A WONDERFUL LIFE" moment where he travels to that alternate universe where he didn't create the Muppet Show.  On his way back to the TVCU, he briefly is pulled to the Dagoba system, a long time ago, in a galaxy far, far away, where he meets Yoda, before finally getting home.  (Thanks to Crazy Ivan for clarifying this for me.)  The cast of Scrubs also appear in character, and also as the actors playing the characters.

April 2006--SCRUBS--Doctor Kelso mentions HOUSE to Doctor Cox.  There is no mention that he's a TV character.  It's entirely possible they had met Doctor House at some lecture or convention.

January 2009--SCRUBS--"My ABC's"--Muppets have appeared on this show I once thought to be a self-contained crossover free show until Ivan set me straight about Apollo Bars and Cougars, but only within Doctor John Dorian's imagination. 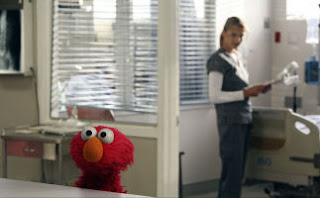 February 2009--WORST WEEK--Doctor John Dorian appears very briefly in a New York hospital. Could be he was there for a lecture or conference?

May 2009--SCRUBS--"My Finale"--The writes of Scrubs had intended for Franklyn the lab tech to return for the finale, where it would be revealed that he was apparently really a post-HEROES Hiro Nakamura all along, which, as a time traveler, is completely possible.  However, for some reason, NBC wasn't having it.

2009--SCRUBS:  INTERNS--Little do people know that when Scrubs ended, it had a spin-off.

May 2010--COUGAR TOWN--The first sign of the connection between Scrubs and Cougar Town comes with the mention of Winston University, the medical school associated with Sacred Heart.

May 2010--COUGAR TOWN--Amongst the pics of Jules (Courtney Cox) in her youth is a pic of Courtney Cox in the video DANCING IN THE DARK, so that music video girl is actually the character Jules from COUGAR TOWN!!!  Perhaps the coolest crossover ever!!!!

Jules and her son Travis are talking about high school accomplishments.....

Jules: The only thing that matters is that you got through it. It’s not like I made some big splash in high school.
Travis: Really!? Because I got your yearbook…
Jules: Well, we don’t need to look through that, I mean, I’m barely in it.
Travis: Look—inside cover, you as the prom queen.
Jules: Yeah, I got 98% of the vote, but, you know, whatever. And it’s only one thing. It doesn’t mean I was super cool.
Travis: Is this you dancing on stage with Bruce Springsteen?
Jules: Yeah, that was super cool. [she starts dancing like they did in the video] Travis: Stop it.
Jules: I’m sorry. [she turns and dances out of the room] 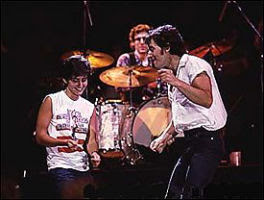 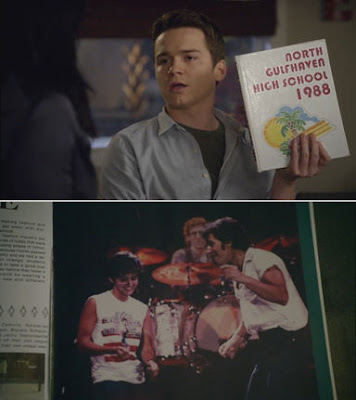 May 2011--COUGAR TOWN--Jules proclaims that Mole People are real, which is true in the TVCU, though most probably consider it urban legend.  But they have encountered Superman and later subjegated by the Mole Man, foe of the Fantastic Four. 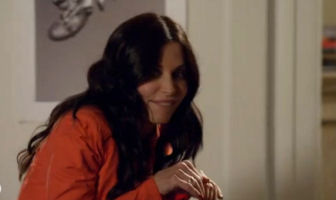 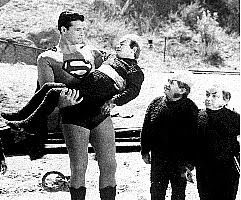 May 2011--COUGAR TOWN--"Something Good Coming"--Abed is seen having lunch in the background of an outdoor restaurant.  In COMMUNITY episode "Critical Film Studies", Abed tells how he visited the set of the show COUGAR TOWN, though later he admits is was made up.  So this is not him being an extra on that show.  Of course, there is still the fact that Cougar Town is a show on TV with Courtney Cox, yet the events of the show are also real.  Likely Courtney Cox does star in a show called Cougar Town that is much different and not related at all to the show we watch (or don't watch, apparently) on our TV.  Following this scene, the cast go to Hawaii for a two parter, in which they run into Ted Buckley, former attorney at Sacred Heart, who left and fled to Hawaii after his girl Gooch ran off with Hooch.  Note that the characters on Cougar Town also frequent Coffee Bucks,a coffee shop (fictional to us, real on the TVCU) which originated on Scrubs.  One slight complication is that Scrubs is also been shown to be a TV show on Cougar Town, but of course as I've said often, I always have away to explain away these "zonks".  In this case, it's probable that indeed a show did get made about the staff of Sacred Heart, likely without permission.  In fact, it was hinted on Scrubs that Grey's Anatomy may have also been a rip-off of the lives of the staff of Sacred Hearts, which of course leads to the complication that Grey's Anatomy was recently crossed into the TVCU via a cross with St. Elsewhere. 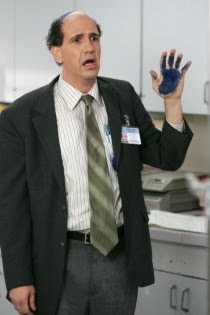 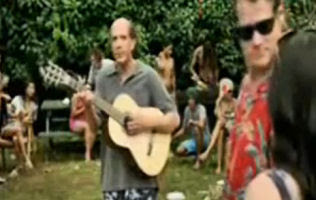 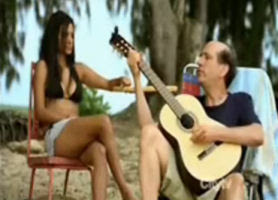 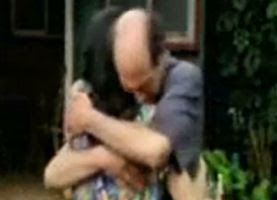 May 2011--COMMUNITY--"For a Few Paintballs More"--Laurie Keller and Travis Cobb (of COUGAR TOWN), who previously had been having lunch at the table next to Abed, are now at Greendale during the infamous Paintball War of 2011.

2011 to Present-ONCE UPON A TIME--TELEVISION CROSSOVER UNIVERSE/ENCHANTED FOREST--There are many alternate dimensions whose origins are unknown, but there are many things parallel. One such dimension is the Enchanted Forest, where a different version of fairy tales happened in an ambiguous once upon a time.  However, many of these characters found themselves trapped in the town of Storybrooke, in the TVCU, with amnesia,and apparently not aging, though not aware of it, which is part of a what we para-scholars call a time lock.  Here Belle's Beast was actually Rumplestitlskin, and she is currently being locked up a prisoner of Snow White's step-mother.  Cinderella has also appeared.  Ivan Ronald Schablotski on Once Upon A Time / Disney Animated Universe:  I'm not 100% on the status of the Tooninverse / Looniverse / Toon Town / House of Mouse these days, but I can now safely state that the fairy tale characters in ONCE UPON A TIME originated in a world that parallels the Disney Princess Universe (for lack of a better name), at least geopolitically. This week's episode featured a genie from the land of Agrabah. Agrabah is the home of Disney's animated Aladdin (and Genie), and even if the metafictional House of Mouse is not considered, characters from Aladdin have appeared in-continuity on the Hercules animated series (and in parody form in Drawn Together). And, of course, Aladdin originated in 1001 Arabian Tales, rather than Grimms' Fairy Tales, as most of the characters on Once Upon A Time did. Also, just remember that they eat Apollo candy bars in Storybrook, Maine, so it should be the same reality as SCRUBS and LOST.  Another Lost / Once Upon A Time connection: Emma's car has a Geronimo Jackson bumper sticker. That's a reference to a fictional band whose hit song "Dharma Lady" was featured on LOST.  Also, Emma Swann and Mary Margaret drink MacCutcheon whisky. This is a fictional brand of scotch whisky used throughout the LOST series.  Toby O'Brien adds:  and in the first episode the town clock was stuck at 8:15......I see the numerical sequence as being a crossover since there's something universal about them of great power and significance.


March 2012--COUGAR TOWN--"A One Story Town"--Ted shows up in Gulfhaven, and really, really [DELETED] with my view about actors/characters.  I proclaim that even though actors play many characters, in that reality, they don't really look alike.  Ted has screwed me over by recognizing how so many folks in Gulfhaven, FL look like the staff of Sacred Heart.