Oh, No, Not This: My Little Pony: Crossovers are Magic

What are we covering today? 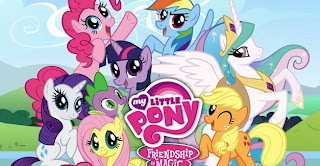 NO. That is not happening. Let’s talk about Bill and Ted. 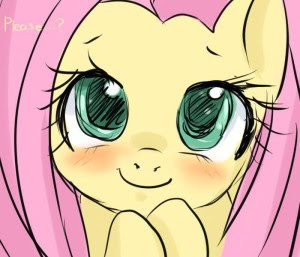 Fine. You win. Okay? You and your cute eyes win. They win every time,

Stupid ponies. It seems this is the show that I cannot escape from. First, the most peculiar of all my exes made me watch this with her; then, my one friend who probably does not want to be named continually sent me all sorts of pony-content without my approval; and then, sigh of sighs, my paper on how a sense of wonder will always attract an audience requires me to watch this show and try to understand the “brony” (bro-pony) culture. (The paper also lets me write about Bill and Ted, H.P. Lovecraft, Edgar Rice Burroughs, Wonderland, and Doctor Who—so it’s not all sunshine apocalypses.) In case you’re dying to understand Equestrian biology, enjoy the following image. For those of you who barely contained your bile during Bio class, I recommend scrolling really really fast. 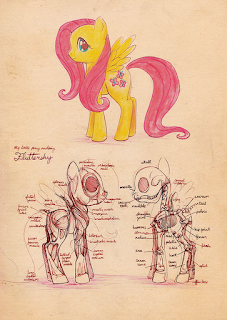 Shall we get down to this? The sooner we finish here the sooner Pinkie Pie will release me.

I will be using what appears to be the closest Earth date in dating episodes. Honestly, since I’m trying to date episodes based on the movements of a Time Lord, any dates I give are my best guess and are fully open to revision.

1998—“The Cutie Mark Chronicles”
The Doctor travels back to Twilight Sparkle’s childhood. His reasons for doing so are entirely unclear, but, then, how often are the Doctor’s motivations ever clear? Perhaps he just wanted to go to a party someone had told him was fun.

Or, you know, Daleks.

2008—“Friendship is Magic” parts 1 and 2
So. This is a show about magical ponies who go on magical adventures. This is the pilot. Here, Twilight Sparkle and her secretary midget-dragon (*sigh* baby-dragon) Spike travel to the city of Ponyville for the grand festivities. Things go wrong. An evil-princess, Nightmare Moon, returned from her exile on the moon and engaged in an attempt to take over all the world and plunge it into darkness. By the end of the episode, of course, she reforms and becomes the friendly Princess Luna. Doctor Whooves appears in the background several times. Knowing him, he likely had a vital hand—er, hoof—in insuring this adventure had a happy ending.

Who is Doctor Whooves, you ask? 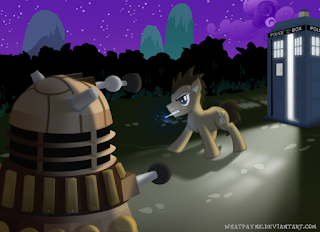 He’s the Doctor. The Tenth Doctor, to be exact. It seems that while he was running from his impending death he ended up in a particularly devilish alternate universe. It was filled with magical ponies. He stayed there—is staying there—for a number of years before continuing on to “The End of Time.” Previous incarnations of the Doctor have also appeared in various places in Equestria (why is this a word Microsoft Word recognizes as real?). They will be noted as they appear.

Doctor Whooves began as an ordinary pony that the fans latched on to and granted the name "Doctor Whooves" because of his accidental resemblence to David Tennant. At some point the production studio seems to have thought this was a grand idea and began to incorporate other incarnations of the Doctor. (Doctor Whooves is increasingly being presented in marketing materials. I hate to admit this, but if they make a ponydoll of the Doctor, I will buy it.)

Twilight Sparkle’s “cutie mark” may be a crossover with Hitchhiker’s Guide to the Galaxy. I’ll let her explain.

2008—“Boast Busters”
The Doctor attends a magic show, then witnesses the near destruction of Ponyville at the hands, er, paws, of a bear demon.

March 2009—“Winter Wrap-Up”
The Doctor takes part in his first musical number, which likely amuses him beyond all reason. At one point, he is seen standing next to himself; apparently he enjoyed the musical number so much that he went back in time to do it again.

2009—“Call of the Cutie”
The Doctor is accosted by a little girl…er, pony selling apples. Perhaps “attacked” is a better word.

2009—“Fall Weather Friends”
The Doctor does his thing, having adventures in the background that just have to be more interesting than what the main cast is doing.

2009—“Sonic Rainboom”
The Doctor altered his pony-form so that he could be a Pegasus. He seems to be having far too much fun with the Ponyverse’s relaxed physics. 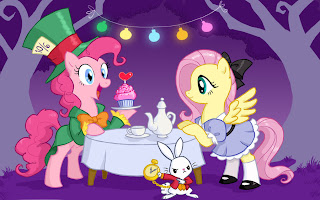 2009—“Green Isn’t Your Color”
The Doctor is wondering around, as he does.

2009—“Over a Barrel”
The Doctor watches another musical number; by all accounts he enjoys himself greatly. 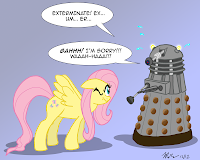 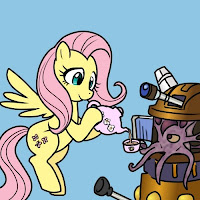 While attending a party at Canterlot, the main cast briefly encounter the Third Doctor, the Fifth Doctor, and the Eleventh Doctor. What they were doing together is currently unknown.

2011—“Dan vs. Pinkie Pie”
Pinkie Pie somehow comes to the TVCU; while there, she tries to cheer up Dan by “bedazzling” his car. Poor Dan.

2011—“Dan vs. My Little Pony: Friendship is Magic”
While trying to get revenge on Pinkie Pie for “bedazzling” his car, Dan is frightened by her frolicking in the forest.

2011—“The Return of Harmony” Some children, er, young ponies argue in front of a statue which frees a chaos beast. A chaos beast which sounds exactly like Q from Star Trek (for the very good reason that both are played by John de Lancie). This chaos beast, Discord, does all of the things Q would do while playing with lesser beings.

There should be no doubt that Discord is Q. 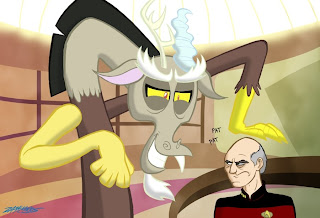 The Dude and friends, from The Big Lebowski, sit in the local bowling alley. Yes. Bowling alley.


It seems someone has been introducing various things to the nation of Equestra that could not have been invented by ponies: bowling, the Catholic chuch (???), and various holidays that are strangely reminiscent of TVCU holidays. It seems the Doctor has slowly influenced the history of the Ponyverse so that, when he took refuge there to hide from his impending death, he would have all of his favorite things surrounding him. As for the Dude? He probably came with the Doctor. I can’t see him turning down a chance at a totally trippy trip into another universe. 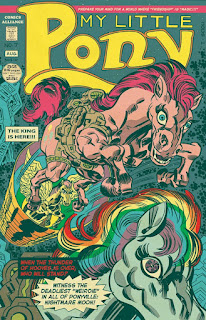 2011—“The Super Speedy Cider Squeezy 6000”
The Doctor takes part in yet another musical number. Then, later, he marks time for the competing cider makers.

2011—“Hearts and Hooves Day”
The Doctor is seen with Derpy Hooves in this episode, which may indicate that the “Doctor Whooves and Assistant” internet radio shows are considered canon by the production staff. Some fans feel this is so; others disagree; flame wars ensue. (Some use this as evidence that the Doctor is in a romantic relationship with Derpy. I'm not going to consider this.)

Regardless, the episodes are enjoyable—and entirely about the Tenth Doctor, so, for the moment, it seems logical to consider them some form of canon. 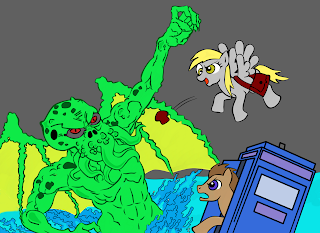 2011—“Putting your Hoof Down”
The Doctor attends a seminar by a motivational speaker. 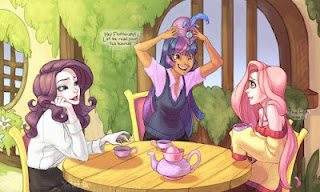 2011—“It’s About Time”
The Doctor assists Twilight Sparkle with preparations for what might very well be the end of the world, as she was warned by her future self. Time travel and its wibbly-wobbly after-effects are his specialty, after all. Everything blows over: the predicted end of the world was an accidently prank future-Twilight played on herself.

2011—“MMMystery on the Friendship Express”
While Pinkie Pie tries to discover who ate her cake, the Fifth Doctor looks at the entries in the baking contest. This is the Fifth Doctor’s second appearance in My Little Pony. 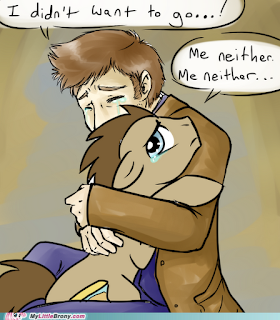 June 2011—“A Canterlot Wedding”
The Doctor runs from shadow demons. If there’s one constant in the Doctor’s life, no matter where he goes in the omniverse, it’s running. Harry Potter crosses universes, takes on the shade of a pony, and attends the wedding. Why is this happening? 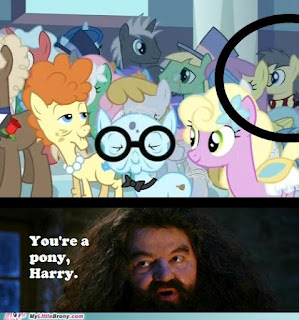 Easter 2012--My friend Jadis adopts Twilight Sparkle (who was a present given to her by me). Twilight is reportedly very happy with her new friend, and is very helpful when it comes to writing papers.
No, this blog has nothing to do with that. Nothing at all. Stop looking at like that. This blog was made for purely professional reasons.


We're at the end of our time together. One last thing: here is a cover of the My Little Pony song "Smile" sung by a 13 year old girl, Zabrina. It's all kinds of heart warming and heart breaking. Enjoy.

***************
Did I miss something?
Do you just want to discuss shared universes in general?
Feel free to join the discussion at our Facebook group!
(Take note that due to a long standing HTML error, I cannot usually respond to comments on the blog itself. So if you wish to get in contact with me, Facebook is the way to go.)  -- James Bojaciuk 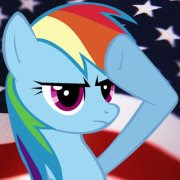 Let us never speak of this again.

James Bojaciuk is the co-owner of the Television Crossover Universe.  He is also CEO Dubious of 18thWall Productions and an editor at Super Entertainment.
Posted by James Bojaciuk at 3:24 PM

Email ThisBlogThis!Share to TwitterShare to FacebookShare to Pinterest
Labels: Doctor Who, Harry Potter, My Little Pony, Star Trek, Star Trek: The Next Generation, The Big Lebowski