Cheers (and the spawn of Cheers)

Before 1982--TOOBWORLD--Check out this blog by Toby O'Brien bringing up some interesting facts and speculation about the early life of Sam Malone before Cheers. February 1982--CHEERS--"Superbowl Pre-Game Show"--The lost episode, the transcript of which you can read here.

1987--THE TORTELLIS--Carla's ex-husband Nick Tortelli moves to Vegas with his new wife, his son, and his son's wife.  Fortunately for Frasier, this show didn't put NBC off from spinning off supporting characters in the future.

April 1990--THE EARTH DAY SPECIAL--This is crossover gold, and most people don't remember it.  Appearances by the muppets, MURPHY BROWN, BUGS BUNNY (from the Looniverse), PORKY PIG (from the Looniverse), TWEETY (from the Looniverse), Will Smith (THE FRESH PRINCE OF BEL-AIRE), DOOGIE HOWSER M.D., Kid 'n' Play (HOUSE PARTY), Dr. Emmett Brown (BACK TO THE FUTURE), MOTHER NATURE, SATURDAY NIGHT LIVE Weekend Update anchor Dennis Miller, Elon Spengler (brother of Egon Spengler of the GHOSTBUSTERS), Nathan Thurm (SCTV/SATURDAY NIGHT LIVE), the people of CHEERS, the Huxtables (COSBY SHOW), THE GOLDEN GIRLS, E.T. THE EXTRATERRESTRIAL, the cast of THE DATING GAME, the cast of JEOPARDY, Doctor SteVen Kiley (MARCUS WELBY, M.D.) and the Bundys (MARRIED WITH CHILDREN).  All these characters, plus other celebrities, appearing as themselves or one time characters are all part of the same story, thus sharing the same reality.  Basically, the Earth is doomed, unless we can save the environment.  This is a global crisis, and just like a DC Comics Crisis event, all these different characters are affected by the same crisis.  Loved it then, and I found it on youtube.  Enjoy.  Oh, and if you catch any crossovers I missed while watching, please let me know.

1990 to 1997--WINGS--There once was a man from Nantucket.  And he had a brother, and they ran a little one plane passenger transport service.

October 1990--WINGS--"The Story of Joe"--Norm and Cliff come to Nantucket for some fishing, but instead end up sitting at the airport diner the whole trip.

February 1992--WINGS--"Planes, Trains and Visiting Cranes"--Frasier and Lilith Crane take a flight that stops off in Nantucket.
February 1993--WINGS--"I Love Brian"--The gang head to Boston for a concert, and try to get in the backstage party, where they run into CHEERS manager Rebecca Howe.

1993 to 2004--FRASIER--Dr. Frasier Crane returns home to Seattle after divorcing Lilith and moves in with his father.  He also gets a job as a radio psychiatrist.

December 1994--SIMPSONS--"Fear of Flying"--Homer goes looking for a new bar to hang out.  He ends up at CHEERS.  Now there is a curious thing about this.  Homer only drove for a few hours at most.  Springfield's place in the U.S. had always been a mystery.  It was in quick driving distance of Boston and Las Vegas.  And in THE SIMPSONS MOVIE, we see that that the state they reside in is bordered by four other U.S. states that are impossible geographically to all border the same state.  My theory is that Springfield moves.  It's really exists kind of outside of the space/time continuum, as does the other major towns of the Bongo Anomaly like South Park and Quohog, though those two are at least fixed.  They just all attract all sorts of weirdness...moreso than the rest of their reality.  So, I was talking about Cheers.  Yes, Homer winds up at Cheers in Boston.  This is the Cheers of the TVCU. February 1995--FRASIER--"The Show Where Sam Shows Up"--Sam Malone visits Seattle and inquires about the fact that he was told that Frasier's dad was a deceased research scientist.  This was because at the time the two were estranged.  According to Sam, after the 1993 Cheers finale, "One for the Road", lives have changed since Frasier left Boston. Former bar manager of Cheers, Rebecca Howe, was dumped by her plumber husband Don Santry, who became rich after a successful plumbing invention, and then she settled her life back into the bar without intent to work there again. Bartender Woody Boyd and his wife, Kelly Gaines-Boyd, have a son, who is smarter than their parents. A bar regular patron and postman Cliff Clavin still lives with his mother, stops attending the bar, and has not left home after he read information about a flesh-eating bacteria.

October 1995--CAROLINE IN THE CITY--"Caroline and the Bad Luck"--Caroline Duffy lives in New York and writes a comic strip called Caroline in the city.  Frasier and his family read the strip, as evidenced in one episode.  Caroline is sick and so her male friends do the strip for her.  Thus Daphne (Martin Crane's live-in physical therapist) doesn't get the joke but the male Cranes all think the strip is hilarious that day.

1996--STAR TREK:  30 YEARS AND BEYOND--Daphne and the Cranes watch and discuss Star Trek.  Though the events of Trek are real in the future, a time traveler leaked information to Gene Roddenberry in the 1960s.

February 1999--FRASIER--"The One Where Woody Shows Up"--Frasier's old bartender at Cheers in Boston, Woody, shows up in Seattle to visit his old friend. Things turn bad after their first night reunion when Frasier realizes that he has moved on with his life and left Woody in the past.

December 2000--FRASIER--"Mary Christmas"--Larry is the man dressed as Santa in this episode (played by Donovan Scott.)  [You can see the full episode here.] 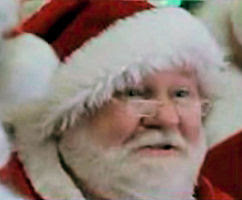 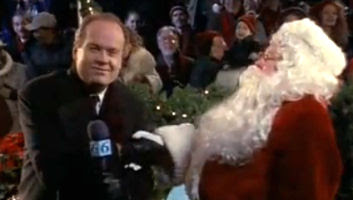 April 2002--FRASIER--"Cheerful Goodbyes"--Frasier returns to Boston to give a speech, and Niles, Daphne and Martin come along to see the city. Frasier runs into Cliff Clavin (played by John Ratzenberger) at the airport and learns that Cliff is retiring and moving to Florida. Frasier and company attend Cliff's retirement party where Frasier reunites with the rest of the gang from Cheers (sans Sam, Woody and Rebecca), including bar regular Norm Peterson (played by George Wendt); waitress Carla Tortelli (played by Rhea Perlman); barflies Paul Krapence (played by Paul Willson) and Phil (played by Philip Perlman); and Cliff's old post office nemesis Walt Twitchell (played by Raye Birk).

February 2004--FRASIER--"Caught in the Act"--Frasier's married ex-wife, children's entertainer Nanny G, comes to town and invites him backstage for a rendezvous. Nanny G appeared on the Cheers episode "One Hugs, The Other Doesn't" (1992) and was portrayed by Emma Thompson. In this episode of Frasier she is portrayed by Laurie Metcalf. She also appeared in the second episode of Season 9 of Frasier, "Don Juan in Hell: Part 2" and was played by Dina Waters.

December 2007--BONES--"The Santa in the Slush"--After his bad experience in Seattle, Larry must have moved to Washington, D.C. where he still played Santa.  (Played again by Donovan Scott.) 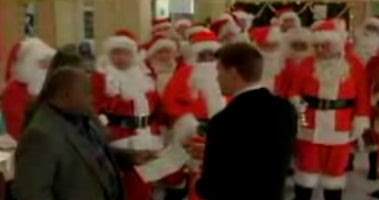 Mid May 2008--HOW I MET YOUR MOTHER--"Everything Must Go"--Lily sells one of her paintings,only because the frame is made by Anton Kreitzer.  Kreitzer is a real person, though his name was once used by Norm Peterson.  Your uncle Toby uses this to connect HOW I MET YOUR MOTHER to CHEERS here.


Early December 2009--THE MIDDLE--"Christmas"--After the bad experience in D.C., Larry (Donovan) moves to Orson, Indiana, thinking it a better place to play Santa. 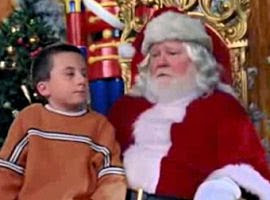 Mid December 2009--IT'S ALWAYS SUNNY IN PHILADELPHIA--"Charlie vs. Santa Claus"--Santa Larry was almost driven insane by one child, and must have fled town immediately, thinking Philly would be better.  (After all, it's always sunny.)  Watch here to find out how wrong he was. 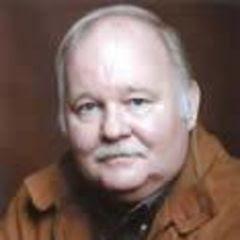