You might be wondering what a show about a quirky small town and a hospital drama have in common, and why they would be in the same blog, but the two shows are indeed interconnected, and it just makes good sense to cover them both together.

1972--PICKET FENCES--Sheriff Jimmy Brock and Dr. Jill Langston are wed by the Reverend Henry Novotny.  He has previously officiated the wedding of Mike and Carol Brady and before that been an Army Chaplain at  Camp Crowder, Missouri and married Rob Petrie and Laura Meehan. 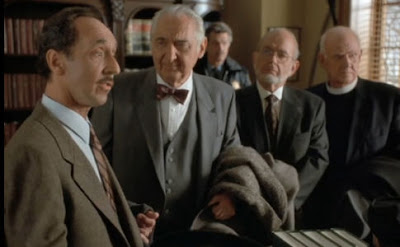 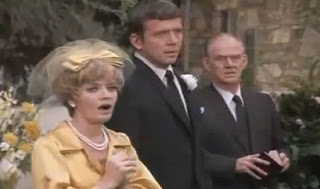 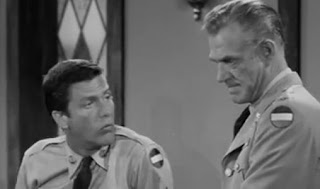 1994 to 2000--CHICAGO HOPE--Dr. Kathryn Austin is shown to have won the Cushing Left Anterior Descending Artery Award.  Dr. Mark Craig of St. Elegius is a previous recipient.  Also, Dr. Austin mentions that her mentor is Dr. David Domedion, who had previously appeared on ST. ELSEWHERE.

1994 to 2000--CHICAGO HOPE--On this series, a reporter talks to Doctor Austin about being accepted into the space program, and mentions that another doctor at County also was accepted, referring to Doctor Greene on ER who was also accepted into the space program on that show.  Noah Wyle as Carter on 'ER' appeared in a locker room shot on 'Chicago Hope'.

November 1994--PICKET FENCES--"Rebels with Causes"--Doctor Jill Brock accompanies the ailing lawyer Douglas Wambaugh to CHICAGO HOPE where he is treated by Dr. Jeffrey Geiger.  Jill is not impressed with hospital and wishes they had gone to the other one across town (referring to County General Hospital from ER.)


December 1994--PICKET FENCES--"Away in the Manger"--When weird happenings involving cows begin to happen in Rome, Wisconsin, some residents wonder if it has anything to do with the events that happened a few weeks earlier in Delta Glen that caused the FBI to come in and intervene.

December 1995--HOMICIDE:  LIFE ON THE STREET--"A Doll's Eyes"--When a Baltimore HOMICIDE officer is injured, he is rushed by helicopter to Chicago where he is cared for by Dr. Jeffrey Geiger of CHICAGO HOPE.

March 2000--CHICAGO HOPE--"Cold Hearts"--An Angel of Death is seen.  Of course, this angel likely is the official angel assigned to the Chicago area at this time, and likely is always hanging out at Chicago Hope, County General, ect, but this one story allowed us to actually see her.


September 30 to October 1, 2006--HOW I MET YOUR MOTHER--"Brunch"--The first time we meet Ted's parents.  Your uncle Toby believes that Virginia Mosby may be the identical cousin of Angela Petrelli of HEROES, which he discuses here.  Your uncle Toby concludes by saying "But then you should drag in all the other characters she has played in the past as well, from 'Picket Fences', 'Providence', ,Charmed' and 'Grace Under Fire' to one-shots like 'Saved', 'Crossing Jordan', 'CSI' and 'NCIS'. And on and on......"