This is going to be like other TVCU blogs regarding historical and literary characters, in that I'm only focusing on television and film appearances within the TVCU.  I hope you have read this before you go and tell me about a book that I left out.

12th Century--RABBIT HOOD--I know, you're thinking this should be in the AU section.  Nope.  Bugs' 12th century ancestor must have accidentally wound up in the TVCU through a rift.  This takes place during the events of the Errol Flynn film. 12th Century--THE ADVENTURES OF ROBIN HOOD--This is the official TVCU Robin Hood, brought in oddly enough by an official crossover with Bugs Bunny.  (I could have tried to put this in the Looniverse, but the Looniverse version is a fox.  Also, the version in the TIME TUNNEL intentionally was made to look like the version from this film.)

12th Century--ROBIN HOOD:  MEN IN TIGHTS--Robin of Locksley returns from the Crusades to find an evil Prince John in charge.  Robin leads a band of thieves against the evil ruler.  Mr. Sweet, or one of his cohort musical demons must have been involved in the events of this tale.  Ollu and Buzsla are also present.  Buzsla actually poses as an Abbott.  These events are not of the real Robin Hood, but a poser.

12th Century--TIME BANDITS--Several time travelers from Heaven and a young boy land in Sherwood Forest and hope to join Robin Hood, until they realize that they are thieves who give their stuff away.

12th century--NEW ADVENTURES OF ROBIN HOOD--"Legend of Olwyn"--Arthur appears in flashback in a tale told to Robin by Merlin.

12th Century--BLACKADDER:  BACK AND FORTH--This must be the same character from Men in Tights and Time Bandits.  He tries really hard to defend the argument that his merry men are not gay, and eventually he is killed when his men are sick of giving away what they steal.

12TH Century--MUPPET SHOW--Another poser is an ancestor of Kermit the Frog. 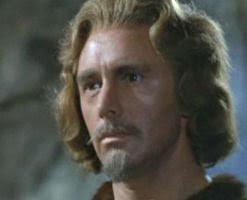 June 25, 2006--CHILDREN'S PARTY AT THE PALACE--Bad guys steal the Queen's handbag, and must be retrieved.  Crossovers include:  WINNIE THE POOH, HARRY POTTER, MARY POPPINS, JAMES AND THE GIANT PEACH, THE BFG, THE WITCHES, THOMAS THE TANK ENGINE, PETER PAN, NODDY, BLUE PETER, ANGELINA BALLERINA, DENNIS AND GNASHER, POSTMAN PAT, THE GRUFFALO, ALICE IN WONDERLAND, ROBIN HOOD, TRACY BEAKER, HORRID HENRY, JUST WILLIAM, ROXIE HART, VELMA KELLY, CHICAGO, GREASE, ME AND MY GIRL, BEATRIX POTTER, MR. BLOBBY, BURGLAR BILL, CHITTY CHITTY BANG BANG, 101 DALMATIONS, QUEEN OF THE PIRATES, OWL AND THE PUSSY CAT, SNOWMAN, and PADDINGTON BEAR. This tale takes place throughout time and alternate realities, but the main events begin in 2006 of the TVCU, I believe.  I'll say that in England apparently is one of those blurred areas where the TVCU and Looniverse connect, as seen in the Children in Need video which features British toons, but also Scooby, Shaggy, and Ben 10. Of those listed, the TVCU characters are the queen, Wendy (but is she shown in her proper time?), Robin Hood (same question), Harry Potter, maybe Mary Poppins (I think there is a link somewhere), Grease (I think is in). It's possible that this could be a link to both realities, and new characters brought in will have to come from whichever is the more logical reality for the character.

2008-1010—Warehouse 13--Season One; Episode Nine "Regrets"--Robin Hood's crossbow is shown to exist in the Warehouse. Since Robin was always show to fling arrows from a Longbow, this item's validity is suspect.

FAR FAR AWAY LAND:  Here, in SHREK, Robin is French and quite the ass.

LOONIVERSE:  DISNEY'S ROBIN HOOD takes place here, where Robin Hood is an anthropomorphic fox.  This Robin Hood also appeared in the video game adaption of DISNEY'S ALADDIN.  During the same time that the real Robin was active, there were a lot of posers doing deeds using the name, as seen in ROBIN HOOD MAKES GOOD, ROBIN HOODWINKED, THE HUCKLEBERRY HOUND SHOW, PEABODY'S IMPROBABLE HISTORY, NOT IN NOTTINGHAM, THE FAMOUS ADVENTURES OF MR. MAGOO, PINKCOME TAX, TINY TOON ADVENTURES, CAPTAIN N:  THE GAME MASTER, SOUTH PARK, SAMURAI JACK, and ROBIN HOOD DAFFY.  In THE DRAWN TOGETHER MOVIE:  THE MOVIE, Tinkerbell, the rhino guards from DISNEY'S ROBIN HOOD, a doorknob like the type in DISNEY'S WONDERLAND, and the Atlantis and Sebastian from LITTLE MERMAID are seen as Disneyland.
Posted by Robert E. "Robyn" Wronski, Jr. at 9:39 PM