Today I'm going to talk about cartoons.  I won't be discussing a particular cartoon, but cartoons in general, and how they fit into TVCM canon.  The great thing about quickies is I don't always have to be tied down to the chronology format and thus can cover broader subjects from time to time.

The current standard for cartoons has connected them in canon to three realities:  the TVCU, the Looniverse, and the Bongo Universe/Anomaly.  This depended mostly on the six degrees rules.  Could the animated series or film be connected more easily to one reality or the other based on crossover evidence?

Certain cartoons have been already demonstrated to fit better in the TVCU due to its crossovers.  I refer you to the current blogs on Teenage Mutant Ninja Turtles, Scooby-Doo, and Batman, for example.

The last group of cartoons went through many alterations.  Originally, I placed the more adult oriented, prime-time cartoons such as the Simpsons, Family Guy, and South Park in the Bongo Universe.  This reality got its name from the name assigned to the Simpsons' reality by Bongo Comics.  The problem was that after I posted my original version of the Bongo Universe blog, I uncovered many crossovers that I considered valid connecting these cartoons to other cartoons in the Looniverse AND to shows and films in the TVCU!

And thus the Bongo Universe evolved into the Bongo Anomaly.  The shows involved remained the same.  But I ended up changing it so that the certain towns involved with those shows were in a weird state where they coexisted in all times and realities at once, due to the after effects of the Crisis on Infinite Earths, and tied the primary families of these shows to Abbott and Costello, Oh and Zed of Year One, and the Flintstones, and a Cthulhu cult.  Yeah, pretty complicated stuff.

The current version of the blog is called the Offspring of Zed, and can be found over on the right hand column under the list of most popular blogs.  Despite its popularity, I'm completely unsatisfied.  Though I'm currently writing the Horror Crossover Universe, I'm also currently planning out my second book, the Cartoon Crossover Multiverse.  I'm planning on applying some of those concepts here.

Basically, one issue I've had with cartoon crossovers is that sometimes they seem to exist in the same reality and sometimes they are not.  And I have to thank the show Once Upon a Time for inspiring my latest theory.  All theories are based on actual on-screen evidence whenever possible, and this show provided a great concept.  In Once Upon a Time, there are several realms where our fiction is reality, and several means to pass from one reality to the next.  In  each reality, laws of time, physics, and the nature of reality itself differs from one to the next.

So it occurred to me that maybe the various cartoons don't exist in the same reality, but in different realities.  But as cartoon realities, the general laws of nature and science don't operate as we would define normal.  So while the Looney Tunes exist in one reality, the Disney toons exist in another.  But that doesn't mean they can't run into each other, especially in places like Toon Town, where the varying realities, including the Live Action Universe (the TVCU) seem to overlap.

This would include the cartoons previously assigned to the Bongo Universe/Anomaly.  When I change things, they will no longer be connected to the TVCU, but redesignated to their own realities.

And if any of that made sense to you, I'm sorry.  You have gone mad.

Check out the current best explanation for the Looniverse here.

And the Bongo Universe/Anomaly/Offspring of Zed here.

Here are some additional quickly found crossovers:  (From TV Tropes and Wikipedia)

Not canon for the TVCU, but here is a fun similarly themed article on the Tooniverse by Jose Ricardo Bondoc.

Some cartoons are canon in Win Scott Eckert's Crossover Universe, following the same concept (which I've borrowed) to place some cartoons more appropriately in the "real world".

Over at Toby O'Brien's Inner Toob, the Toob World multiverse includes its own version of the Tooniverse which you can read about here.

Here are some of the more recent posts regarding cartoons in the TVCU discussion forum.

Just an FYI from the 2nd episode of Once Upon a Time in Wonderland, this Alice has never heard of the Care Bears. The Knave knows of them, but likely based on his time living in Storybrooke, having seen the cartoon or the toy, rather than actually having encountered them.

So I got A she Dragon Action figure form the Jim Lee's TMNT line that had Savage Dragon figures in it. why this is important. Is he file card the file card makes it quite Clear her origin is based on the Savage Dragon cartoon So that would mean that this comic http://tmntentity.blogspot.com/2011/02/savage-dragon-playmates-toy-pack-in.html is a crossover Between the TMNT cartoon and the Dragon cartoon probably after dragons last episode For TVCU proposes we can use this to bring in some of the Dragon comic crossovers like the ones with super man and Hellboy We could also say that Megaton which has dragon first appearance in a team up with vanguard but is no longer Savage dragon or vanguard canon could be Cartoon verse Dragon after he leaves the force

Normally Mad sketches don't count as canon, but considering that Mad is a property of Cartoon Network, and the characters are all voiced by the original actors and drawn in their original style, I want to count this. Even if it's a dream. Note that Alfred E. Newman has also appeared on the Simpsons.


HCU Comments:  This is a fun homage to the Universal monsters, even with putting up with Phyllis Diller as the Bride of Frankenstein.  However, it’s unlikely any of the monsters here can really be the original versions from the classic movies.  Dr. Frankenstein here is Dr. Boris Frankenstein, and at least the storyline acknoledges the family legacy theory.  The story also names him as the creator of this monster and bride.  However, in the prequel, The Mad, Mad, Mad Monsters, it is a Henry von Frankenstein who is shown to have created them.  This is not the same Henry from the 1931 Universal film.  Henry and Boris seem identical, and may be twins, or perhaps the same person (Henry Boris von Frankenstein).  This helps explain the appearances of a Universal style monster (and sometimes bride) during the period of 1948 - 1998 when the actual Universal Monster is trapped in La Mirada.  The werewolf is unnamed here, but in the prequel is named Ron Chanley , a tribute to the actor who played Lawrence Talbot, Lon Chaney.  The Invisible Man here could be Geoffrey Radcliffe, though if so, he’d be a bit older (though sure doesn’t look it.)  In the prequel, he is shown to have settled down and has an invisible family.  The Doctor Jekyll here is likely one of the many of the Jekyll family over the years to continue the research of the Hyde formula.  This mummy isn’t Imhotep or Kharis, but it might be Klaris.  Or it may just be another mummy.  The Gill Man is likely another of the same species, and not the same from Creature from the Black Lagoon.  The Hunchback also can’t possibly be the original be the same.  And the giant ape referred to as “It” can’t be the late King Kong, but is likely another of the same species.  In the prequel, he is named Modzoola.  Dracula is the only one who could be the same, if not for being so damn goofy.  Let’s call this a soul clone.  The prequel shows that this Dracula has a son.  All the monsters die at the end, but that’s never stopped a good monster before from making a comeback. 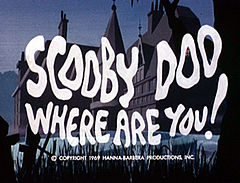 SCOOBY-DOO, WHERE ARE YOU! (ANIMATED SERIES)
Release Date:  September 13, 1969 - November 4, 1978 (Contemporary Setting)
Series:  Scooby-Doo
The Story:  A group of teenagers and their talking dog go around solving mysteries which always involves debunking a fake haunting.

HCU Comments:  Yes, Scooby is in.  And the series should be in.  It’s got the crossovers, and it’s about kids going around debunking the supernatural.  It is a horror series for kids.  But we’ve got two issues.  So let’s talk about the talking dog in the room.  Scooby is an intelligent talking dog, and yet, in all the travelling and meeting new people, nobody is freaked out by a talking dog.  In this case, I can’t offer any in-story references that support a theory.  All I can offer is a hypothesis which you can accept or reject.  If you reject, feel free to create your own or just ignore Scooby’s existence in the HCU.  My best theory is that Scooby is indeed a mutant dog, or else somehow transformed by magic, in some untold tale from before the series began.  And perhaps he really only talks to the kids when no one else is around, or else maybe the kids are the ones enchanted, and are the only ones who can hear Scooby talk.  But considering that the nature of the show is that magic isn’t real, I’d say the mutation is more likely.  The second issue is the one we have with comics.  These kids don’t age.  They are eternally high school seniors, at least through this initial first series.  But that doesn’t work in a universe where most characters do age normally.  Each Scooby-Doo series is looked at independently, and some are in and some aren’t.  In some later series, the kids are older, but not as old as they should be considering their setting remains contemporary.  (As in the 1970s stories where they are teens is set in the 1970s while their 2000s stories where they are in their mid 20s are set in the 2000s.)  I will address the issue again for each series entry and how I choose to resolve the issue.  But for this series, I think it best to place the events as taking place in the summer before their senior year, and then weekends and school breaks throughout their senior year.  (After all, they do a lot of travelling for high school students.)  And that’s the best I can do.  If anyone comes up with something better, I applaud you and suggest you apply your solution to your shared crossover universe.

SEASON 2 EPISODE 45-18 “NOWHERE TO HYDE”
Release Date:  September 12, 1970 (Contemporary Setting; See Comments for series)
Horror Crosses:  Dr. Jekyll and Mr. Hyde (novel)
The Story:  The gang pursue the alleged ghost of Mr. Hyde, a jewel thief and search for clues to the culprit, and clues point to the great-grandson of Dr. Jekyll.

HCU Comments:  This episode places the original Jekyll and Hyde as real, and thus Scooby and gang end up pulled into the Horror Crossover Universe.
Posted by Robert E. "Robyn" Wronski, Jr. at 3:47 PM