Firefly is an American space western drama television series created by writer and director Joss Whedon, under his Mutant Enemy Productionslabel. Whedon served as an executive producer, along with Tim Minear. The series is set in the year 2517, after the arrival of humans in a new star system, and follows the adventures of the renegade crew of Serenity, a "Firefly-class" spaceship. The ensemble cast portrays the nine characters who live on Serenity. Whedon pitched the show as "nine people looking into the blackness of space and seeing nine different things".[1]
The show explores the lives of a group of people who fought on the losing side of a civil war and others who now make a living on the outskirts of society, as part of the pioneer culture that exists on the fringes of their star system. In this future, the only two surviving superpowers, the United States and China, fused to form the central federal government, called the Alliance, resulting in the fusion of the two cultures. According to Whedon's vision, "nothing will change in the future: technology will advance, but we will still have the same political, moral, and ethical problems as today".[2]
Firefly premiered in the U.S. on the Fox network on September 20, 2002. By mid-December, Firefly had averaged 4.7 million viewers per episode and was 98th in Nielsen ratings.[3] It was canceled after eleven of the fourteen produced episodes were aired. Despite the series' relatively short life span, it received strong sales when it was released on DVD and has large fan support campaigns.[4][5] It won a Primetime Emmy Award in 2003 for Outstanding Special Visual Effects for a Series. The post-airing success of the show led Whedon and Universal Pictures to produce Serenity, a film based on the series.[4] TV Guide ranked it #5 on their 2013 list of 60 shows that were "Cancelled Too Soon".[6]
The Firefly franchise expanded from the series and film to other media, including comics and a role-playing game.[7][8]

I actually don't have a lot to say about Firefly, but I have this theory that just posting anything about Firefly will draw in lots of readers, just because it's Firefly.

Firefly was an awesome show that got cancelled due to poor ratings, and I blame myself for that.  Firefly and another show, Space:  Above and Beyond, came out the same time, and somehow I confused the commercials for both as being the same show, and because the commercials for Space:  Above and Beyond looked dumb, I didn't watch Firefly, even though I knew it was from Joss Whedon, the maker of the beloved Buffy.

Years later I watched the entire season in one sitting on Netflix after watching Serenity, the film that wrapped up the one season show.  And I was very, very sad for what I had done.  You see, my family was a Nielson's family during that season.  So I was partially responsible, more so than the average television viewer.

So Firefly is in the future of the TVCU, or the Whoniverse, or both.  I don't know.  Whatever.  The TVCU has many divergent futures, and at some point, some event seems to have melded all the divergent realities back into one.  (Think of a shoelace that has become unraveled in the middle, but still tightly held together on both ends.)

Come join the discussion about Firefly or other TVCU related topics here.

And here's the Inner Toob perspective on Firefly.

And here is Thom Holbrook's thoughts on the crossover between Firefly and Battlestar Galactica.

TVCU Mini-Chron:  (Note that this is not a full chron.  It's a only a partial, because, you know, quickie.  If you know of any Firefly crossovers not mentioned in this blog, please feel free to comment below or in the discussion forum mentioned above.)

2008—Dr. Horrible’s Sing-Along Blog
The “Evil League of Evil Leaders,” or the mafia godfathers over much of the TVCU’s supervillain community, includes a man who claims to be the true Thomas Jefferson. This is argued against by his super-strength and immortality, but considering Jefferson’s prior (half-completed) deal with the devil, anything is possible. However, it is important to note that elements of the true events were greatly exaggerated.
The singing everyone suffers from, however, is probably another reality-altering appearance of the singing demon from the Buffy the Vampire Slayer episode “Once More, With Feeling.”
Dr. Horrible’s Sing-Along Blog is in the TVCU based on reused weapon and costume props from Firefly; as all of the reused props are in the possession of Dr. Horrible, we may assume he time traveled to the future and sole a number of small items. Firefly is in the TVCU via a number of crossovers with the Halo franchise, which in turn has a large amount of crossovers linking it to the TVCU via the Aliens and Predator series, Iron Man, and Mass Effect.
Mass Effect in turn has crossover links to Army of Darkness, Dracula, The Princess Bride, the Cthulhu Mythos, Hitchhiker’s Guide to the Galaxy, A Clockwork Orange, and Stark Trek (among others). All of the crossovers within Firefly, Halo, and Mass Effect will be covered in a future blog.

2008--CABIN IN THE WOODS--Wolfram and Hart are responsible for keeping the old ones from rising and destroying the Earth by making regular ritual sacrifices.  Basically, every few years they lure teens to a rural setting and set up a situation for them to become victims of some sort of slasher.  This film crosses BUFFY THE VAMPIRE SLAYER, FIREFLY, EVIL DEAD I and II, HELLRAISER, ANGEL, CLOVERFIELD, GRUDGE, MUMMY, FRIDAY THE 13TH, A NIGHTMARE ON ELM STREET, THE SHINING, ROMERO ZOMBIE FILMS, RE-ANIMATOR, LEFT 4 DEAD, FRANKENSTEIN, HALLOWEEN, RESIDENT EVIL, TEXAS CHAINSAW MASSACRE, and DOC SAVAGE.  James and I also infer a link to SCOOBY-DOO, but that link is harder to prove.  Note these aren't the only crossovers, but the only ones that James and I caught on our first viewings.  Once we have it on video, I'm sure we'll find more.  The results of the end of the movie lead to two alternate events.  In the TVCU, Gort comes to Earth to reclaim the Earth, but in the end, chooses to give humans another chance.  But in the TVCU2, Gort allows for the release of giant monster, as seen in the film Cloverfield.  2008 is a key year for divergence between the TVCU and TVCU2.  This is also the year vampires and mutants go public.  I can only imagine that four men's trip in time via a hot tub during this year (with one of them staying behind to intentionally alter history has some major effect.)

26th Century--FIREFLY--Weyland-Utani still exists in the future of Firefly.

3000--DRACULA 3000--From Ivan Ronald Schablotski: Regarding the DRACULA tie-in, the movie DRACULA 3000 does feature a transport spaceship called the Demeter.  Dracula 3000 fits as well as Jason X, Firefly, Alien, and other sources that do not acknowledge the existence of humanoid extra-terrestrials. The movie is quite bad and best forgotten, but I don't have the luxory of forgetting. It's a very lacklustre effort at retelling the Bram Stoker novel as a Space Opera. Since I play in a Monster Horror Universe, I can allow it, but I don't know that the Pulp Trek or Non-Trek futures that have been outlined for the TVCU could support it.  Actually, yes, it could fit. But that doesn't mean it SHOULD.

Salvatore Cucinotta There's also a Firefly/Serenity shout out in that Vibe panel. "Can't stop the Signal"

And yet another Firefly crossover...

I found this from my friend, Mark Ellis.

Mark Ellis
I saw post about Firefly on FB...and I remembered a few years back when a comics dealer on Ebay described DEATH HAWK as a "fun sci-fi adventure very similar to Joss Whedon's Firefly."
That was when I first saw any kind of connection. In my opinion, there are more similarities between the two properties than differences, but the most interesting link is how both DEATH HAWK and Firefly feature beautiful red-haired con-artists who use the name "Brigid" as aliases...both characters shared the same M.O. and taste in evening wear.
On Firefly, she was played by Christina Hendricks...and in print she was rendered by the inimitable Darryl Banks and Adam Hughes. 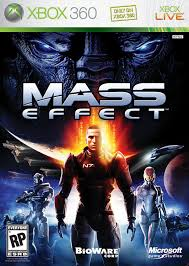 MASS EFFECT (VIDEO GAMES)
Release Date:  November 20, 2007 - March 6, 2012 (Setting is 2183 - 2185)
Series:  Mass Effect
Horror Crosses:  Evil Dead; Dracula (novel); Lovecraft’s Cthulhu Mythos
Non-Horror Crosses:  The Princess Bride; Firefly; Hitchhiker’s Guide to the Galaxy; Berserker; A Clockwork Orange; Star Trek
The Story:  Shepard and his crew must stop the Reapers, aliens who exist outside the known galaxy, from invading.
HCU Comments:  Mass Effect consists of three games and several tie in works of fiction thus far.  One character is Ashley Williams who seems to be descended from Ash of the Evil Dead series, even having a fondness for the term “boomstick”.  One of the ships seen is the Demeter, the same name as the ship seen in Dracula.  As noted with Star Trek crossovers, ships tend to be named after real historical figures, places, ect, and thus I consider this a crossover.  The Reapers of this story are clearly the Old Ones of Lovecraft’s Cthulhu Mythos.  Though they have given up their bodies for bio-mechanical forms, they still inhabit the same shapes and the Reaper mythos strongly resembles the Cthulhu Mythos.  A reference to a character being only mostly dead is a link to the Princess Bride.  The use of a maneuver called the Crazy Ivan is a link to Firefly.  The use of being dead as a tax dodge provides a link the Hitchhiker’s Guide to the Galaxy.  The name Qwib-Qwib is a reference to Fred Saberhagen’s Berserker series.  The project from A Clockwork Orange is also referenced.  Also the engineer Adams may be a Star Trek reference.  This video game series takes place in the Horror Crossover Universe, but as with all stories set in the future, it takes place in one of an infinite number of possible alternate futures.

CABIN IN THE WOODS (FILM)
Series:  Cabin in the Woods
Horror Crosses:  Buffy the Vampire Slayer; Evil Dead; Hellraiser; Angel; The Grudge; The Mummy (Universal); Friday the 13th; A Nightmare on Elm Street; The Stephen King Universe; Night of the Living Dead; Re-Animator (80s); Left 4 Dead; Frankenstein (novel); Halloween; Resident Evil; Texas Chainsaw Massacre
Non-Horror Crosses:  Firefly
The Story:  A group of teens head out for a weekend in a cabin in the woods, not knowing that they have been chosen as sacrifices to an ancient deity in order to save the world from his wrath.
HCU Comments:  This film exposes the secret truth to modern horror.  Behind it all is a secret organization, chosen to sacrifice youth to ancient gods.  All of the above named crossovers have been linked in this film, and revealed to be part of the is secret conspiracy.