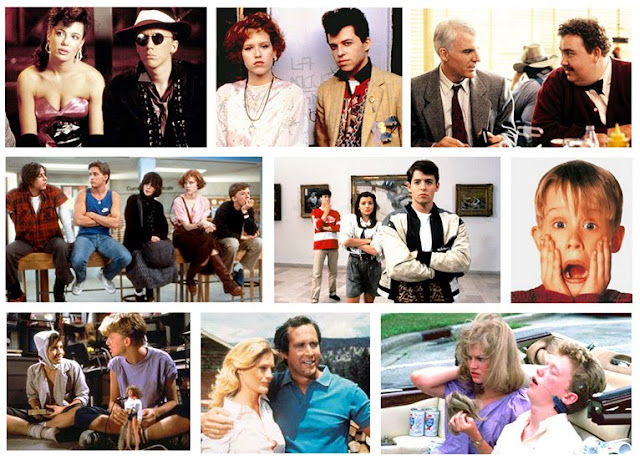 John Wilden Hughes, Jr.[1] (February 18, 1950 – August 6, 2009) was an American film director, producer, and screenwriter. He directed or scripted some of the most successful films of the 1980s and 1990s, including National Lampoon's Vacation; Ferris Bueller's Day Off; Weird Science; The Breakfast Club; Some Kind of Wonderful; Sixteen Candles; Pretty in Pink; Planes, Trains and Automobiles; Uncle Buck; Home Alone and Home Alone 2: Lost in New York.
He is known as the king of teen movies as well as helping launch the careers of actors including Michael Keaton, Molly Ringwald, Anthony Michael Hall, Bill Paxton, Matthew Broderick, Macaulay Culkin, John Candy, and the up-and-coming actors collectively nicknamed the Brat Pack.

Shermer, Illinois is in the America of the TVCU, despite the fact that Jay and Silent Bob couldn't find it.  John Hughes once said that all of his projects were meant to exist in the same shared reality, and since I honor writer's intent here in the TVCU, anything with Hughes' name in the credits as writer, director, or producer automatically makes it in.  Not that Hughes didn't help us out, by placing most of his works in the same fictional Shermer, a suburb of Chicago.  This includes the Brat Pack films, the Vacation films, the Home Alone films, and others.

Come join the discussion about Shermer, Illinois or other TVCU related topics here.

TVCU Mini-Chron:  (Note that this is not a full chron.  It's a only a partial, because, you know, quickie.  This is a sampling of the Shermer TVCU crossovers.  If you know of any Shermer crossovers involving television and film not mentioned in this blog, please feel free to comment below or in the discussion forum mentioned above.)

1988--LEAGUE OF EXTRAORDINARY GENTLEMEN--"1988, America"--When war-hero-turned-handyman Kesuke Miyagi is found drained of blood, it becomes clear that the occult gang known as the Lost Boys are targeting the only individuals that can stop them from complete domination of America. It's the perfect case for the League of Extraordinary Gentlemen--except that their government contact, Oscar Goldman, disbanded the team in 1979 after they defeated Mr. Han's army of the living dead.

Now, disgraced scientist Emmet Brown has to put together a new team to combat the growing threat of the Lost Boys and their leader, a newly resurrected vampire kingpin Tony Montana: Transportation specialist Jack Burton, ex-commando B.A. Baracus, tech wizard Angus MacGyver and the mysteriously powerful femme fatale known only as "Lisa." But will Brown be able to stop the Lost Boys before time runs out?

This was a April Fool's Day joke that got lots of us very excited when we thought it was real.  However, it is real enough for the TVCU.  The League of Extraordinary Gentlemen was a graphic novel which appears in Crossovers.  Note only the first two volumes (and this) are in the TVCU.  Kesuke Miyagi is from THE KARATE KID.  Thus this brings in the whole film series.  THE LOST BOYS is from a series of films, which are now brought in.  (Some have suggested the town of those films is really Sunnydale.)  Oscar Goldman is from CHARLIE'S ANGELS, which is already in.  Mr. Han is from FAST TIMES AS RIDGEMONT HIGH, bringing that film in.  Emmet Brown is from BACK TO THE FUTURE, which is already in.  Tony Montana is from SCARFACE, bringing that film in.  Jack Burton is from BIG TROUBLE IN LITTLE CHINA, which is in Crossovers.  Angus MacGyver is from MACGYVER, which bring in this series, and MACGRUBER.  We know where B.A. Baracus is from, I hope by now.  Lisa is from WEIRD SCIENCE.  This is the film version, which confirms Shermer, IL in the TVCU (thus confirming that Jay and Silent Bob are not good at navigation.)  The TV Lisa is also in the TVCU.  Eventually, I will do a Shermer blog, and straighten out how both versions coexist.  Likely the show is in the TVCU2.

Pictures of former League members....Top Left is Jill Monroe from CHARLIE'S ANGELS.  I think the top center guy is SERPICO.  Can someone verify that for me?  Top right is Rocky Balboa from  the ROCKY FILMS.  Bottom left is John Shaft from SHAFT.  Bottom middle is the Bandit from SMOKEY AND THE BANDIT.  Bottom right is Steve Austin from the SIX MILLION DOLLAR MAN.

1990--HOME ALONE--When a man dressed as Santa Claus gets a traffic ticket, he says "What's next?  Rabies shots for the Easter Bunny?"

1994--BABY'S DAY OUT--A rich couple in Shermer, IL want their picture in the paper, so they hire the Three Stooges to kidnap their baby, but the baby gets away and roams around Chicago avoiding capture without even trying.

2011--THE HOWLING REBORN--Shermer, IL is the site of a werewolf attack when a pack decides it is time to exterminate humanity.

Here's what the Crew has posted lately aboutShermer.

quote form this interview with John Hughes John Hughes: When I started making movies, I thought I would just invent a town where everything happened. Everybody, in all of my movies, is from Shermer, Illinois. Del Griffith from Planes, Trains & Automobiles lives two doors down from John Bender. Ferris Bueller knew Samantha Baker from Sixteen Candles. For 15 years I've written my Shermer stories in prose, collecting its history.http://home.comcast.net/~aimsters4/bclub.html

In Christmas vacation, the pamphlet for the swimming pool has the umbrella corporation logo on it.


Release Date:  April 5, 2010 - April 5, 2013 (Contemporary Setting -- see comments)
Series:  Scooby-Doo! Mystery Incorporated
The Story:  A group of teens (and a talking dog) find themselves consistently investigating the mysteries of their small town.
HCU Comments:  This show never really mentions dates, but the show features the use of modern 21st century technology contemporary with the dates the show aired, but also features many elements and characters from the 1970s, which is the era of the original shows Scooby Doo, Where are You? and the New Scooby-Doo Movies.  This series contradicts the original shows too much to be part of the same timeline, but if we could prove this to be a divergent timeline to the main HCU timeline, then, as with Anno Dracula, any crossover links in the divergent timeline would still bring in series to the main Horror Crossover Universe.  And as it turns out, the final episode wraps up with the Mystery Incorporated timeline being altered and becoming the timeline of Scooby-Doo, Where are You?, which is the main HCU timeline.  So there you go.

SEASON 1 EPISODE 2 “THE CREEPING CREATURES”
Release Date:  July 19, 2010 (Contemporary Setting -- See series comments above)
Horror Crosses:  Scooby-Doo, Where are You?; Buford and the Galloping Ghost
Non-Horror Crosses:  Vacation
The Story:  The gang are sent to Gatorsburg by their mysterious benefactor, Mr. E, to solve a mystery.

HCU Comments:  Fred mentions past cases where he trapped Carlotta the Gypsy the Phantom of the Vazquez Castle.  Those cases happened on Scooby-Doo, Where are You?  In a Gatorsburg flashback, one of the panners seen is a character from Buford and the Galloping Ghost, bringing that series into the Horror Crossover Universe under the rules for divergent timeline links.  Clark Griswald and family are also seen in the family Truckster, providing a link to the Vacation films.


THE HOWLING REBORN
Release Date:  October 18, 2011
Horror Crosses:  The Howling movie franchise
Non-Horror Crosses:  Shermer, Illinois (see Comments)
The Story:  Shermer High School senior Will Kidman discovers his mother is a werewolf, that he is a werewolf, and that his mother's pack is ready to exterminate humanity. With help from his best friend Sachin and love interest Eliana Wynter the pack is defeated, the alpha wolf is destroyed, and Shermer High School is mostly destroyed in the crossfire.
HCU Comments:  Shermer, Illinois is a fictional suburb of Chicago created by John Hughes and serves as the setting for several of his films (National Lampoon's Vacation, Home Alone, Ferris Bueller's Day Off, The Breakfast Club, etc.). This film serves as a link between those movies and the Howling films