My Name Is Earl is an American television comedy series created by Greg Garcia that aired on the NBC television network from September 20, 2005, to May 14, 2009, in the United States. It was produced by 20th Century Fox Television and starred Jason Lee as the title character, Earl Hickey. The series also stars Ethan Suplee, Jaime Pressly, Eddie Steeples, and Nadine Velazquez.
Most episodes from the first season, then only a few from the rest, begin with Earl presenting the premise of the series:

You know the kind of guy who does nothing but bad things and then wonders why his life sucks? Well, that was me. Every time something good happened to me, something bad was always waiting round the corner: karma. That's when I realized that I had to change, so I made a list of everything bad I've ever done and one by one I'm gonna make up for all my mistakes. I'm just trying to be a better person. My name is Earl.

Both great shows from creator Greg Garcia.  It so happens the Chance family live in the town of Natesville, which is not too far away from Camden County, where Earl Hickey lives.  There have been several references to the cancelled My Name is Earl in Raising Hope, including characters from the old show on the new, and even the revelation that Earl finished crossing things off his list.  Raising Hope also had an appearance from characters from Yes Dear, another Greg Garcia show.  My Name is Earl also had sort of crossovers with COPS twice, and Earl has had many cameos in various cartoons and comics, due to his distinctive look, no doubt.

Come join the discussion about My Name is Earl and Raiding Hope or other TVCU related topics here.

October 1985--G.I. JOE--"Twenty Questions"--The first appearance of the character Hector Ramirez, a TV journalist lacking in integrity.  Ramirez also appears in THE TRANSFORMERS, JEM AND THE HOLOGRAMS, INHUMANOIDS, and TRANSFORMERS 2010, as well as the Devil's Due G.I. Joe comic, where he is killed by Cobra in # 40 for bringing sensitive information to Joe Colton.  It should be noted that Ramirez is meant to be Geraldo Rivera, and I agree, which of course means that Geraldo was killed in the TVCU in 2005!!!  I don't buy it though, and think he must have survived.  Geraldo has also appeared as the fictional TVCU Geraldo in SAIL TO THE CENTURY, ALL ABOUT STEVE, THE MIRACLE OF SPANISH HARLEM, THIRTYSOMETHING, HARD TO KILL, EMPTY NEST, NURSES, THE CRITIC, GRUMPIER OLD MEN, MEET WALLY SPARKS, CONTACT, COP LAND, MEN BEHAVING BADLY, NASH BRIDGES, PRIMARY COLORS, SEINFELD, HEARTLAND, THE SOPRANOS, and MY NAME IS EARL.

May 1999--AMERICAN PIE--Four male teen virgins make a pact to support each others efforts to lose their virginity by prom night.  After almost nailing the hot exchange student Nadia, Jim ends up going to the prom with band geek Michelle, who really surprises him.  Oz tries to become a more sensitive guy and joins the chorus, and finds himself falling in love with chorus girl Heather.  Kevin already has a girlfriend, and thinks things will be easy for him, but his relationship with Vicky isn't as solid as he thinks.  And Finch's plan to spread false rumors about himself fails thanks to a prank by Stifler, but in the end, Stifler will regret the prank when Finch meets Stifler's mom.  Note that this film marks the creation of the term MILF, much to the delight of internet pornographers everywhere.  Throughout all the American Pie films, the beer of choice is Heisler Beer.  This is a fictional beer company that has appeared elsewhere as well, including TRAINING DAY, SUPERBAD, BEERFEST, MALCOLM IN THE MIDDLE, MY NAME IS EARL, STAR TREK:  ENTERPRISE, CSI:  CRIME SCENE INVESTIGATION, THE RECRUIT, THE SHIELD, STEALING HARVARD, BONES, BURN NOTICE, DESPERATE HOUSEWIVES, DOLLHOUSE, EVERYBODY HATES CHRIS, HAPPY ENDINGS, HEROES, HOW I MET YOUR MOTHER, NEW GIRL, PRISON BREAK, TERMINATOR:  THE SARAH CONNOR CHRONICLES, TWO AND A HALF MEN, VERONICA MARS, WEEDS, WHITE COLLAR and many others.  This film came out in 1999.  It has a contemporary setting, and takes place in the weeks leading up to prom, thus the timeline placement.

Late Fall 2005--ARMY OF DARKNESS # 8 to 11--"Ash Vs. Dracula"--When Dracula is revived accidentally, Ash must take him down.  The Dracula here is the same soul clone previously seen in MONSTER WAR.  (Which is not listed since it has not direct relationship to film or television.)  The Frankenstein creature and werewolves that appear also are the same from that other comics event.  Incidentally, and randomly, Earl Hickey is seen.  Though MY NAME IS EARL doesn't take place in New York, where this story is happening, he has been known to leave Hamden County when his list demands it.

December 25, 2011--RAISING HOPE--"It's a Hopeful Life"--Jimmy dreams about what life would be like if his daughter Hope hadn't been born.  The angel in this case is Maw Maw (played by Cloris Leachman!!!)  No, I'm sure Maw Maw is not Clara Oddbody, who was already deceased in 1977, but since this angel gig seems to be a family business, if could be they are cousins, identical cousins.

April 2013--RAISING HOPE--"Arbor Daze"--Crossover with A Christmas Carol of sorts.

MY NAME IS EARL IN TOOBWORLD

Here's what the Crew has posted lately about My Name is Earl and Raising Hope.

The most recent episode of Raising Hope had another reference to Camden County (from My Name is Earl).

Crossover with A Christmas Carol of sorts.

Just watched "Gambling Again" episode of Raising Hope. Virginia visits Gamblers Incognito which is run by Patty from My Name is Earl. Later we see Patty with a client who is dressed as a Malibu Lifeguard played by Timothy Stack - this would be Notch Johnson from Son of the Beach making the episode a three way crossover.

AND HERE IS YOUR HORROR CROSSOVER UNIVERSE PREVIEW OF THE WEEK FEATURING MY NAME IS EARL!!! 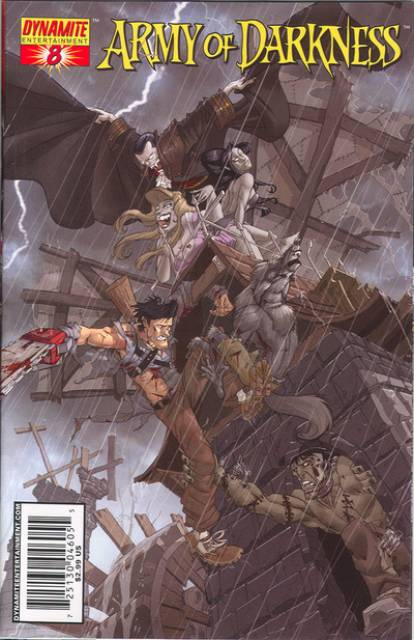 ARMY OF DARKNESS # 8 - 11 “ASH VS. DRACULA” (DYNAMITE PRESS)
Release Date:  2006  (Contemporary Setting)
Series:  Evil Dead
Horror Crosses:  Dracula (Top Cow); Frankenstein (Top Cow); Wolf Man; Eva, Daughter of Dracula
Non-Horror Crosses:  My Name is Earl
The Story:  In New York City, Ash does battle with Dracula, the Frankenstein Monster, and Wolf-Men.,
HCU Comments:  This is the same group of monsters last seen in Top Cow’s Monster War, despite this being published by Dynamite Press.  Meanwhile, Earl Hickey is seen.  Why would he be in New York rather than Hamden County?  Surely to cross something off his list.  So this crossover cameo brings the television series My Name is Earl into the Horror Crossover Universe.  This story continues directly from Monster War, happening one day later, and is the second story appearance of Eva, Daughter of Dracula, who will spin off into her own series.