In an era of quickies, a few full chrons pop out from time to time.  This is one of those few posts where it takes me a while to get to it, even though I'd been writing it out in my head or in word docs and notebooks for years.

This is not a mini-chron.  It's not a quickie or a crew review.  It's the real deal.  My first full blown TVCU chronology in over a year.  I am going to try to do one of these a week, even while working on the book, because I miss it.

So a few weeks ago I did a quickie on Shermer, Illinois, and I will eventually do a full Shermer blog as well.  But today we are talking about the Griswalds (or is it Griswolds?).  I will tackle the question of the ever changing and unaging kids, and talk about crossovers.  (And it's Griswald.  It was misspelled in Christmas Vacation.)

The Griswald family is the creation of John Hughes, for the National Lampoon magazine.  They appeared in two stories:  Vacation and Christmas Vacation.  The stories were set in the 1950s and based on Hughes's own family vacations.

So here we go. Summer 1983--NATIONAL LAMPOON'S VACATION--The Griswalds, a family who live in the Chicago suburb of Shermer, take a cross country road trip to Wally World in southern California.  The actor playing Rusty (Anthony Michael Hall) was 15 and Audrey (Dana Barron) was 17.  This Rusty and Audrey will later appear in the Old Navy commercials.  This version of Audrey will also reappear in Christmas Vacation 2.

Spring 1985--WEIRD SCIENCE--In Shermer, Illinois, two teens create a computer genie who makes major alterations in time and space in order to help those teens get girls and be popular.  Could this have someone had an effect in which time and space were caught in a constant state of flux, especially in Shermer?  I'm not saying it's possible, but yes, I am saying that.

July 1985--CRISIS ON INFINITE EARTHS--Following the first film, all the other films feature different versions of Audrey and Rusty, with varying ages.  Additionally, the Griswald home isn't always the same, and even the spelling of the Griswald name changes.  I'm not saying that the Crisis had something to do with it, but I am saying it.  Apparently, for some reason, between each Vacation film, there is some sort of altering of the timeline.

Summer 1985--NATIONAL LAMPOON'S EUROPEAN VACATION--The Griswalds win the Pig in a Poke game show and get a free vacation in Europe.  Note here they show the spelling is Griswald, the same as in the original John Hughes stories from National Lampoon.  Rusty says that he is 15.  The actor playing Rusty, Jason Lively, was 17 and the actress playing Audrey, Dana Hill, was 21!  Audrey was still a teenager in high school, subject to her parents rules.  "Euro Rusty" will reappear in the Old Navy commercials. 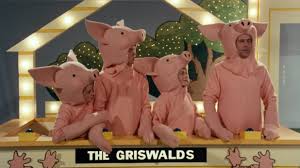 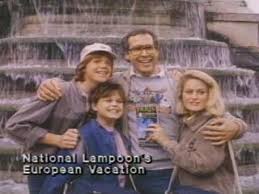 
December 1989--NATIONAL LAMPOON'S CHRISTMAS VACATION--The Griswolds have invite their parents to come stay with them for the holidays.  The family name is altered here.  The house is also different.  Rusty is played by Johnny Galecki who was 14 in this film.  Audrey was played by Juliette Lewis who was 16.  This Audrey will reappear in the Old Navy commercials.

March 1994 to July 1998--WEIRD SCIENCE--The events of Weird Science the movie have been rebooted, and this television series has quite a few links of its own to the proper TVCU timeline, which will be discussed in a later blog.  So, could the events of the film mixed with the Crisis have caused some kind of wibbly wobbly temporal anomaly in Shermer?

1996 to 1997--BUFFY THE VAMPIRE SLAYER--SEASON 5--In the 5th season of Buffy the Vampire Slayer, Joyce states that when she gets out of the hospital, she is going to take the kids to Wally World. This is a reference to the fictional theme park from National Lampoon's Christmas Vacation, placing the Griswolds in the Buffy-verse and the Television Crossover Universe.  When Buffy's mom mentioned taking the kids to Wallyworld, it made sense seeing as how they were in CA, and I counted that as a crossover. But when Sam and Dean's brother mentions getting in the family Truckster and going to Wallyworld, it's a bit more of a stretch, because of the Truckster reference, and by itself I wouldn't count it, but since the Vacation films are in the TVCU, Wallyworld does exist and so do Family Trucksters, so I guess I can accept it. Summer 1997--VEGAS VACATION--Rusty is played by Ethan Embry who was 19 in this film.  Audrey is played by Marisol Nichols, who was 24.  Both kids are too young to gamble in this film, and Audrey is currently looking at colleges.  Clark mentions that he hardly recognizes his kids, a reference to the constant recasting.  By this point, Clark and Ellen (and Eddie) have continued to age normally and have not been recast.  If the kids had not been recast, the kids would be in their late 20s.  Neither of these kids show up again.

2000-AMERICAN ADVENTURE--Written by John Hughes.  IMDB says this is a spin-off of National Lampoon's Vacation.

2001--NOT ANOTHER TEEN MOVIE--This spoof movie actually has links placing it as part of the very Shermer universe that it spoofs.  In the film, an entire school year takes place in one week.  It's an odd movie that shouldn't exist in the proper TVCU, unless it took place in a town caught in some sort of odd space-time anomaly where the timeline is constantly in flux. December 2003--NATIONAL LAMPOON'S CHRISTMAS VACATION 2:  COUSIN EDDIE'S ISLAND ADVENTURE--The Johnsons (that's Cousin Eddie and Catherine) get a trip to a south seas island vacation.  Audrey is invited along, and the family end up stranded on an isolated island.  Note that like Clark and Ellen, Eddie and Catherine are always the same.  Strangely, this is the original Audrey, Which means that the timeline somehow is temporary restored to its original form, with an adult Audrey.  In fact, from this point forward, Rusty and Audrey will always be adults except for in the Old Navy commercial and also the divergent timeline series Scooby-Doo!  Mystery Incorporated.  This Audrey will be seen next in the commercial.  Clark and Ellen don't appear in this movie. 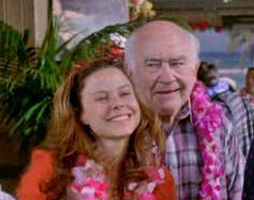 April 2007--FAMILY GUY--"Boys Do Cry"--The scene where Meg lies on the couch deflated is a reference to the recent Partnership for a Drug-Free America ads where a teenage girl is shown flattened on the couch and her friend tells the viewer that her marijuana abuse caused her to become dull and listless.  The scene of Peter having an on-the-road flirtatious encounter with a beautiful young woman in a red Ferrari is a spoof of the scenes involving Clark Griswold (Chevy Chase) and a sexy blonde (Christie Brinkley) in National Lampoon's Vacation. Unlike Vacation, where Clark barely managed to avoid an accident while focusing on the voloptuous passing driver, things do not end happily for the pretty girl - she is presumably killed in a fiery head-on crash with a semitrailer truck, caused by her inattention to the road.  At the Little Miss Texas Pageant, somebody shouts “Hey, it’s Enrico Pallazzo!” when Stewie’s wig falls off. This is a reference to The Naked Gun: From the Files of Police Squad!  The scene during the family’s drive to Texas where Peter flirts with a blond female driver (similar to Chevy Chase flirting with Christie Brinkley in the film National Lampoon’s Vacation), the female driver crashing into a truck, and Lois’s comment, “You marry Billy Joel. It’s going to happen one way or another” was cut on FOX, but not Adult Swim.

November 2009--FAMILY GUY--"Jerome is the New Black"--Clark Griswald appears.  I'm not saying that three Griswald crosses with the offspring of Zed, but yes I am.

February 2010--HOTEL HELL VACATION--This ran during the Super Bowl, and again on USA.  Prior to the visit, the Clark Griswold Facebook page would update as if Clark were on Facebook, updating his page and talking about the upcoming visit.  Since I got to comment on Clark's status updates, this is another connection placing me in the Television Crossover Universe.  Audrey does not appear.  Rusty is now married with kids of his own, and lives some distance away from Shermer and Chicago.  Rusty is played by Travis Greer.  The actor's age is unknown.  He seems to be one of those actors who hides his age from all online sites, but he's clearly an adult here.  The original Rusty, Anthony Michael Hall, was 42 at the time of this film. 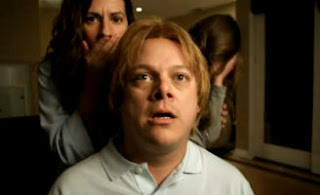 2011--THE HOWLING REBORN--Shermer High School senior Will Kidman discovers his mother is a werewolf, that he is a werewolf, and that his mother's pack is ready to exterminate humanity. With help from his best friend Sachin and love interest Eliana Wynter the pack is defeated, the alpha wolf is destroyed, and Shermer High School is mostly destroyed in the crossfire. Shermer, Illinois is a fictional suburb of Chicago created by John Hughes and serves as the setting for several of his films (National Lampoon's Vacation, Home Alone, Ferris Bueller's Day Off, The Breakfast Club, etc.). This film serves as a link between those movies and the Howling films

December 2012--OLD NAVY VACATION--Despite my previous belief that the Vacation movies involved one family in one timeline where the movies took place one year apart, this commercial demonstrates that the recasted Audrey and Rusty Griswalds are indeed different.  In these commercials, several versions of Rusty and Audrey appear and Clark addresses them as such.  I can only assume that there has been some kind of constant altering of the timeline that is constantly changing the Griswald children for some unexplained reason.  And for some reason, during this Christmas season, the timelines merged.  See this Toobworld article for more details about the commercials.  Appearing are:

The Future--THEME PARK VACATION (or NEW VACATION or VACATION)--Learning that Wally World is closing, Rusty takes his family to the beloved theme park.

BLUE HARVEST--In the Family Guy episode Blue Harvest, the Griswold Family is seen driving past the Death Star during the battle at the end.

NATIONAL LAMPOON UNIVERSE--This is the timeline of the original stories from National Lampoon Magazine, featuring the Griswalds.  These stories were written by John Hughes.  They were Vacation and Christmas Vacation.  They were set in the 1950s and based on John Hughes' own childhood.

SCOOBY-DOO!  MYSTERY INCORPORATED (ANIMATED SERIES)--SEASON 1 EPISODE 2 “THE CREEPING CREATURES”--The gang are sent to Gatorsburg by their mysterious benefactor, Mr. E, to solve a mystery. Fred mentions past cases where he trapped Carlotta the Gypsy the Phantom of the Vazquez Castle.  Those cases happened on Scooby-Doo, Where are You?  In a Gatorsburg flashback, one of the panners seen is a character from Buford and the Galloping Ghost, bringing that series into the Television Crossover Universe under the rules for divergent timeline links.  Clark Griswald and family are also seen in the family Truckster, providing a link to the Vacation films.