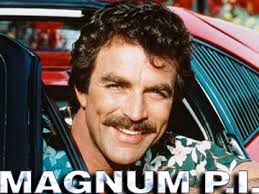 What's a quickie?  See this blog.
From Wikipedia, the free encyclopedia

Magnum, P.I. is an American television series starring Tom Selleck as Thomas Magnum, a private investigator living on Oahu, Hawaii. The series ran from 1980 to 1988 in first-run broadcast on the American CBS television network.
According to the Nielsen ratings, Magnum, P.I. consistently ranked in the top twenty U.S. television programs during the first five years that the series was originally broadcast in the United States.[1] Originally appearing in a prime time American network timeslot of 8 p.m. Eastern on Thursdays,Magnum, P.I. was one of the highest-rated shows on U.S. television.

Magnum was a great show that was a part of my childhood memories.  My step-father was really into these kind of shows, so shows like Magnum were part of our family bonding time.

Magnum has crossed with Murder She Wrote, Simon and Simon, and had one fun episode featuring several famous detectives who remained nameless.  There was a proposed episode of Quantum Leap as well that never came to be sadly that would have involved Sam leaping into the body of Thomas Magnum.

Come join the discussion about Magnum P.I. or other TVCU related topics here.

From the TVCU, thus far, and I'm really surprised by this, Magnum, P.I. has only had one mention, which is the following:

December 1999--FAMILY GUY--"Da Boom"--Peter watches a special about Twinkee the Kid, where his family talk about his flamboyantly gay personality as a kid. This may be a reference to a popular slang word for gay men, twink, itself an abbreviation of the gay slang term twinkie, originally for very young, blond, pretty men.  Randy Newman was parodied as a senile man at a piano singing about everything he sees. Newman was voiced by Will Sasso, who was reprising the character from a recurring MADtv sketch.  There is a cutaway of Peter feeding Tom Selleck on Magnum, P.I..

Here is more on Magnum P.I. from Toobworld.

From Poobala, here is what Thomas Holbrook says about crosses between Magnum P.I. and....

Here's what the Crew has posted lately about Magnum P.I.

Have any of you seen the 'Simon & Simon' episode "Emeralds Are A Girl's Best Friend" in syndication? I was wondering if they even bother showing it since it's the second half of a 'Magnum P.I.' episode. In syndication, the ending of the 'Magnum P.I.' episode was altered so that the story was self-contained and needed no crossover. I was wondering if the same happened with the beginning of the 'Simon & Simon' follow-up......

"Magnum, PI" episode "Little Games" features a woman who breaks into Robin's Nest in order to test its security, she uses a 'sonic pulser' to open locks. I have no idea whether such a thing exists in real life, but it would tantamount to being a sonic screwdriver if it did....

Andrew Brook‎The Crossovers Forum
There is an "Oceanic" desk at the airport in the "Magnum PI" episode "Murder 101".... except it's for a car rental firm, not an airline. Unless they're owned by the same people... (there was also an episode on a day or so ago where one of Higgins's interminable stories referred to a Captain Nigel Thornberry, but I don't think he sounds much like the father out of "The Wild Thornberrys")

To take with a pinch of salt (not the most reliable of sources) - Just prior to Magnum, Tom Selleck played a recurring role on The Rockford Files. Producers had wanted to do an episode of Magnum in which James Garner guest starred as Jim Rockford, but were unable to due to rights issues.
The series featured crossover episodes with Simon and Simon and Murder, She Wrote. A planned crossover with The Equalizer was never finalized.
The episodes featuring visiting St Louis Detective Luther Gillis were unsuccessful attempts to sell a new TV series based on the character.
http://www.imdb.com/title/tt0080240/trivia

"The episodes "Ki'is Don't Lie" and "Novel Connection" begin respective plots that conclude on the Simon & Simon episode "Emeralds Are Not a Girl's Best Friend" and the Murder, She Wrote episode "Magnum on Ice", both of which featured Tom Selleck as Magnum and John Hillerman as Higgins, while Jameson Parker and Gerald McRaney guest starred on Magnum, P.I. as the Simon brothers A.J. & Rick and Angela Lansbury guest starred as Jessica Fletcher. For re-run and overseas purposes, the first half of these crossovers (the Magnum episode) also had alternate endings filmed, which wrapped the story up in a single episode and so allowed repeat showings to be shown as "stand alone" stories instead of being two-part crossovers." All very well, but what dumbass put the standalone version of "Novel Connection" into the "Murder She Wrote" syndication package?!!!

The cops in these Epsiodes are Called Hawaii five O which even in the Show is supposed to be the Name of the task force the theme plays when ever they show up and McGarrett is implied to be a real guy http://www.youtube.com/playlist?list=PL39B7605A3F9E9AC5
Posted by Robert E. "Robyn" Wronski, Jr. at 3:03 AM