How I Learned to Stop Worrying and Let the TVCU Kill Me: James Bojaciuk in the TVCU

It’s always traumatic to write about yourself. Particularly when you’re dead.


1992—According to family superstition, I was born.


July 2, 2006—Detectives Carlton Lassiter and Juliet O’Hara are loaned to the Philadelphia Police Department. Presumably one of their old cases has come back to haunt the east coast. Shawn Spencer and Burton Guster follow. When the case took them to the docks, Gus took the chance to hand out pharmaceutical samples to everyone who passed. Hey, why let murder stop business?


I ended up receiving one of these samples. They were very. . .minty.


Lassiter, O’Hara, Spencer, and Guster were on the waterfront as a promotion for the premiere of Psych. They were milling around, talking to people, staying in character all the while. The promotion did its job: they got me to watch—for eight years, start to finish.


April 2010—At a graduation party, I met a small boy wearing a Hudson University t-shirt. Good to know they’re already gearing up the next generation for America’s most crime-ridden college.


Hudson University, of course, is from The Cosby Show, Law & Order, and just about every show where something goes murderously wrong on campus.


October 2010—“How to Convert Your Boyfriend to the Cthulhu Cult”; James Bojaciuk


I dated a pscho-pants crazy lady. She didn’t just have alternative beliefs, she worshiped Cthulhu and begged for the dark release of his rise.


In hindsight, this was a mistake.


She left me for someone who hated the gods and wanted to build a machine to pierce the “space time quantum divide” and save humanity for itself.


They liked reading The Necronomicon together. The Mad Arab, it seems, is quite the aphrodisiac.

2013—I met Spider-Man in the cheese section at Wal-Mart. Since Peter Parker is (probably) retired, someone else must be wearing the mask. He didn’t seem particularly amazing, spectacular, superior, ultimate, or friendly neighborhood. 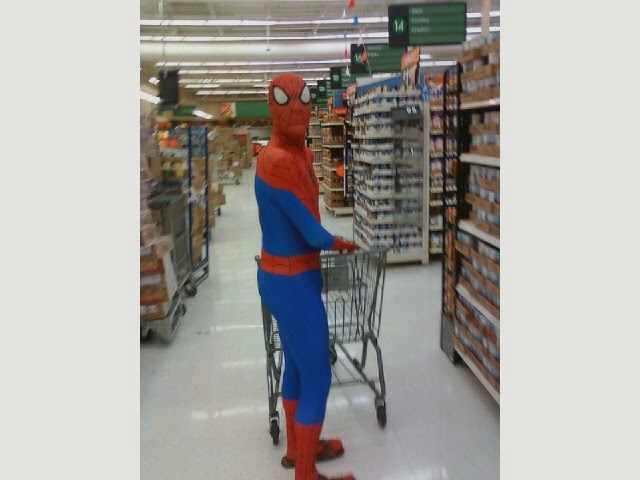 
In a book whose very existence cannot be confirmed there is a town whose name is so copyrighted that, even in these liberal corners of the internet, I cannot speak its name. In this town is a detective, a presently nameless detective, visiting corpses in the morgue. One of them, I’m sorry to say, is my corpse. My name mars the toe-tag, after all. They didn’t spell my name right. I can’t blame them. It’s a very hard name.


It is unknown how I died.


A person who hates me very much suggested I should die because “You’re so filled with fucking hate that I hope your internal organs shrivel up and become sentient and eat your fucking heart.”


Let’s assume that happened.
Posted by James Bojaciuk at 11:30 AM