Adventure has a name.
His name is Indiana Jones.
Adventure, as it turns out, also has a goddaughter.
Her name is Alison Dare. 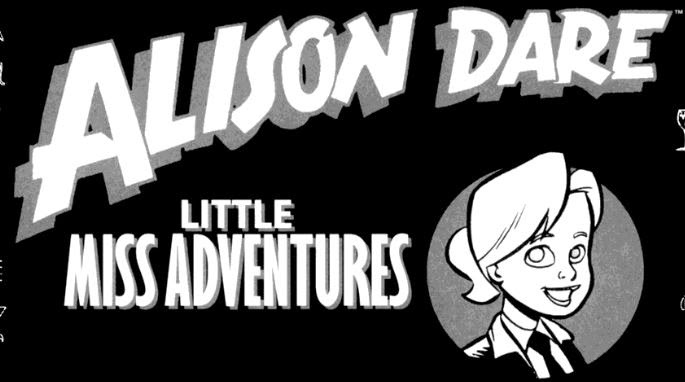 (Mr. Torres and Mr. Bone. Should you come upon this essay, consider it a humble request for more Alison Dare adventures.)
Alison Dare resists dating. Boys are yucky and dumb.
Alison Dare also resists dating. Her stories never offer a year, month, or date; you're lucky to run into a season. But we can come within a few years of establishing a date. Nazi Germany is still a world power (therefore we're before 1945); moreover, Nazis can walk the streets in full Nazi regalia. We're before America entered the war, if not before the war started.
Alison Dare's mother, Dr. Dare (no relation to a certain Doc Dare), has a collection of artifacts, all rare, most only in her office via government intervention. She works with spies, religious orders, and superheroes. Perhaps the government has entrusted her to uncover a secret weapon, something to tip the balance of power.
She has the Ark of the Covenant (so we're after 1935 and Raiders of the Lost Ark).
She has two of the three Sankara Stones (so we're after 1936 and Indiana Jones and the Temple of Doom).
She has a broken-eared statuette (from the Tintin volume The Broken Ear). This is the key. Tintin concluded his adventure in early 1937. The statuette--one of hundreds--could not have ended up in Dr. Dare's office until that time.
Therefore, all of the Alison Dare adventures take place between early 1937 and September 1939 (or, possibly, late 1941).
Summer Break, 1939~Alison Dare and the Arabian Knights; J. Torres and J. Bone
Leaving Alison Dare to her own devices is never a good idea, particularly in the middle of an archaeological dig. She goes rummaging about in the artifacts and finds an ancient lamp.
There’s really only one way this can go.
She rubs it. A genie rushes forth, pushing wishes upon her. With a “Sim Sim Sala Bim!” he makes her a princess, he calls down an army of followers, he calls down fabulous riches and chaos. The chaos is sealed, of course, and the genie and his creations smoke away.
“Sim Sim Sala Bim!” is the magic phrase used by Hadji Quest in Jonny Quest. Though Hadji was only a better-than-average illusionist, it appears his phrase has a history of power. One of Alison’s summoned guards shouts “Hassan chop!” This indicates he is Hassan from the Looney Tunes cartoon “Ali Baba Bunny.”
This strikes up a fascinating question: do genies merely bring objects and people from the looniverse? Physics are loose and even now, after the Last Great Time War, passage back and forth is easy. Genies may be all bluff; they may be low powered beings who are keyed into the looniverse, and use that power to appear mighty.
This comic is collected in Alison Dare: Little Miss Adventures. Take note that it has absolutely nothing in common with the following graphic novel, Alison Dare: Little Miss Adventures. Different contents, different stories, different publisher. For confusion’s sake, I gave this essay the exact same title. Ain’t I a stinker?
August 1939~Alison Dare: Little Miss Adventures; J. Torres and J. Bone
"What I Did on My Summer Vacation (Or: Tomb Raider, Too)"﻿
This is series of short stories which escort Alison through the beginning of her new school year. She begins it the way only she could: telling the class, breathlessly, of the mummies after her.

No, not those mummies.
What makes this story interesting for our purposes, is how the other girls react. 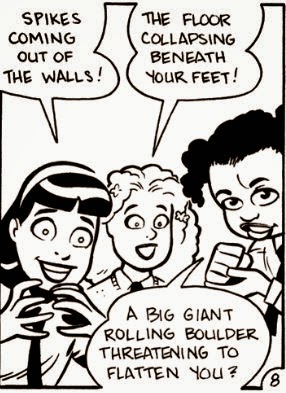 Raiders of the Lost Ark hit theatres on June 12th, 1981. We're at least 42 years too early for this to be a pop culture reference on pigtail's part. As will be shown, Indiana Jones is a distinct part of Alison Dare's world.
Perhaps Indy was friends with Alison Dare's mother. Perhaps she roped him into lecturing at Alison's school, a simple once-over on archaeology. The girls, however, had other plans; they roped him into telling them all about his latest adventure. The spikes which murdered poor Forrestal and the infamous boulder stuck in their mind, strongly, three years later. Though the blonde girl's suggestion of "The floor collapsing beneath your feet!" recalls the second Grail Test from Indiana Jones and the Last Crusade, it's too vague to use as a crossover.
#﻿
"A Day at the Museum (Or: Now Museum, Now You Don't)"
Alison and her friends decide to sneak into Dr. Dare's museum and take a private tour. Outside, they pass Tintin and Snowy from Hergé's The Adventures of Tintin. 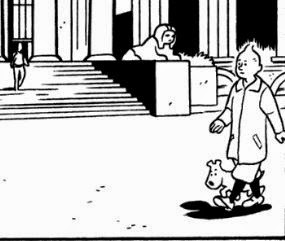 Inside the office, the girls find a Broken-Eared Statuette, from the Tintin adventure The Broken Ear (though it's possible to argue argue the squat, angry idol is meant to be the Chachapoyan fertility idol from Raiders of the Lost Ark, I believe it is not)...

And the Right Hand of Doom (from Hellboy) as well two of the three Sankara Stones (from Indiana Jones and the Temple of Doom). The two lost Sankara Stones somehow made their way from an Indian river to the United States.
The presence of the Right Hand of Doom seems to contradict the fact that Hellboy was born in 1945, but the Right Hand preexisted not only Hellboy, but humanity. This is explored in The Island and Hellboy in Hell. (Keep in mind, however, that the Hellboy of the TVCU is not quite the Hellboy of Mike Mignola. The TVCU incorporates the events of Hellboy and Hellboy II: The Golden Army, and tones down--or eliminates--the apocalpyses.)

#
"In the Beginning (Or: Dare She Goes Again)"
There are still adventures to be had. Why sleep?
Alison grabs her friends and they sneak out the school's window, filing out into a world of adventures. 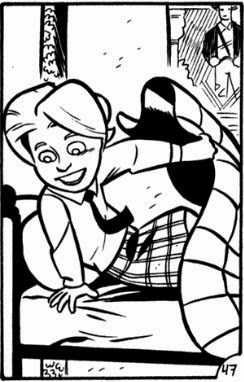 Alison has a framed picture of Indy next to her bed. Looks like someone has a crush!
In addition to the above stories, the first collection, Alison Dare: Little Miss Adventures, has two more pulse-pounding adventures. There's also a final, crossover-less graphic novel, Alison Dare and the Heart of the Maiden.
And, for now, that is the end of the Alison Dare canon.
I still hope for a triumphant return. 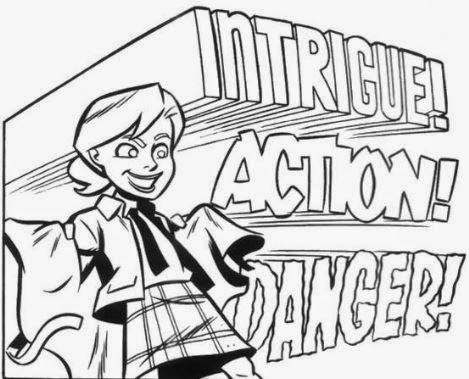 Posted by James Bojaciuk at 11:52 PM No comments: Links to this post