Those Who Live Long Forgotten: The Crossovers Between the Covers

Celebrating the fourth anniversary of the Television Crossover Universe, each day for ten days, I will be reposting one of our ten most recent posts.  This is our ninth most recent post, from James Bojaciuk.

James and I first met in the Wold Newton Family discussion group, where we conspired to create a Wold Newton book club, and later had plans to create a website, that sort of evolved into this website.

James came aboard here as a founding member of the TVCU Crew and later, after he subjected us all to the ponies, I felt he deserved to become co-owner of this site.

Meanwhile, James is also CEO Dubious of 18thWall Productions, which has published my book, the Horror Crossover Encyclopedia.  A lot of what 18thWall publishes meshes pretty well with the TVCU, and the post below, about one of 18thWall's other books, demonstrates that.

They cough away into obscurity, and settle into the comfortable spot just beyond our vision.

You would never believe the little girl with the too-big smile is the queen of vampires, no, no. Nor would you believe that the two semi-homeless women who list around New York in time with the tide are the remains of the two great monsters, out for revenge. You certainly wouldn't believe the master detective spent his final days in a cramped, black-ops prison.

No, you wouldn't believe a word of it.
Except, of course, for the fact it's printed in a very attractive book and sold for a very attractive price. Today, I've had the great pleasure of releasing my first book, Those Who Live Long Forgotten. Surprising no-one at all, the book is stuffed to the brim with crossovers.
te
Join me as we dig down deep and examine the stories in this collection. 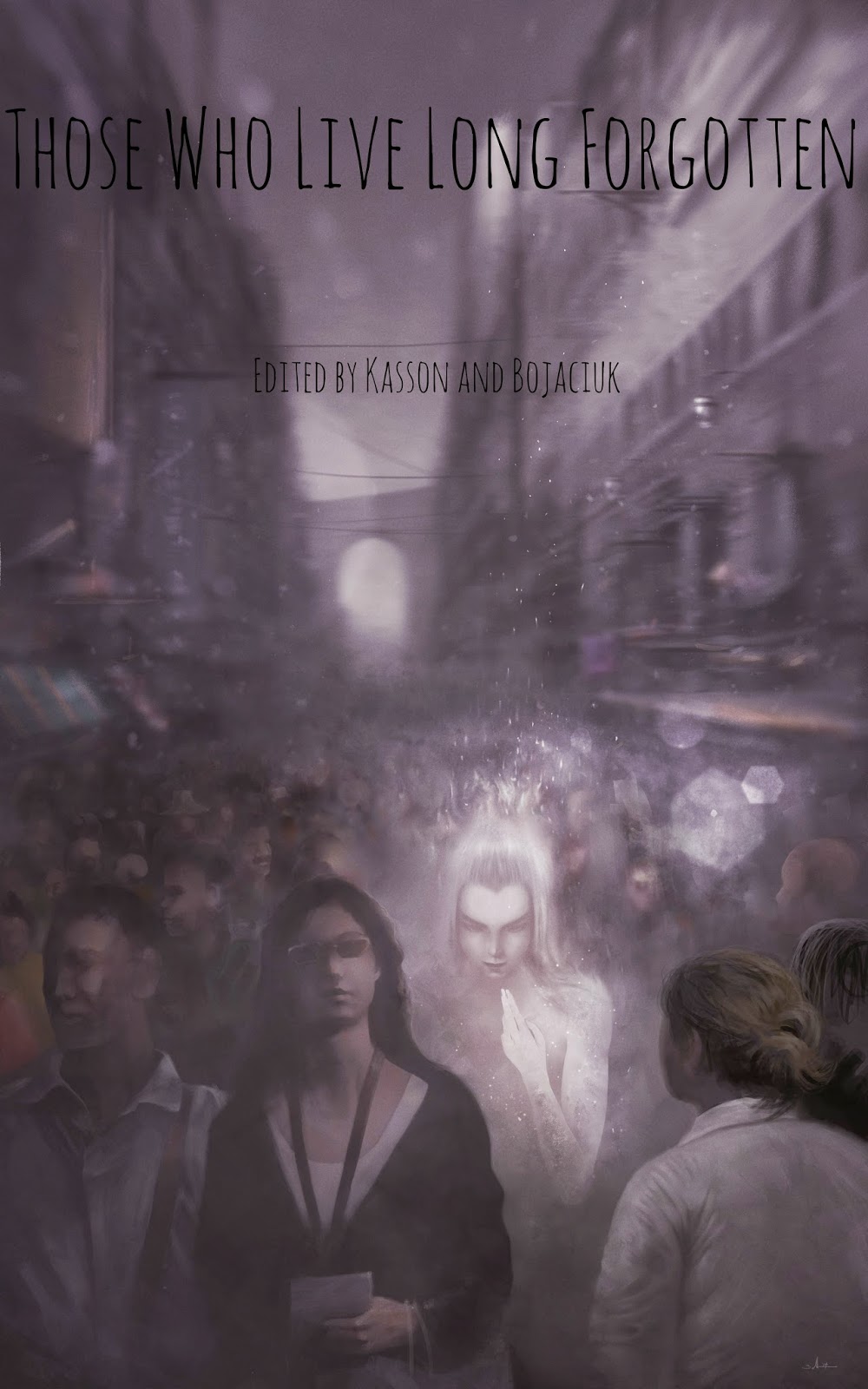 Please note that two of these entries--the entries for "Ruin: The Rise of the House of Karnstein" and "Imprisoned, Half-Dead: A Syllogism"--are taken directly from Robert Wronski's upcoming book The Horror Crossover Encyclopedia. Thank you, Rob, for letting me borrow from your work.
THOSE WHO LIVE LONG FORGOTTEN “THE MIRROR” (SHORT STORY BY HANNAH LACKOFF)
Release Date: October 2014 (setting is divided between Once Upon a Time, Nazi Germany, and the present day)
In-Story Crosses: Bloody Mary (folklore), An (Hannah Lackoff (see Notes)), and Snow-White (Grimms’)
Authorially-Implied Crosses: See Notes
The Story: In three tales spun around a single magical mirror, we find the true origin of Bloody Mary (far bloodier, and far more horrifying than ever imagined), we find the events of Snow White occurring yet again (An and the seven protectors, escaping Hitler’s grip), and the origin of the woman who may one day be Snow-White’s own Evil Queen.

Notes: An is explicitly similar to Snow-White and, considering the mirror in every story is meant to be the same magical mirror, she could be a reincarnation of Snow-White (or, in my preferred explaination, cosmic recurrence is inacting the story once more).
Bloody Mary is an endlessly popular folklore figure. If you need to know where she comes from, ask your mirror.
Though left largely unstated, the unnamed woman who whispers “Mirror, mirror on the wall” is likely the true Evil Queen.
For further crossovers: in her introduction, Lackoff states, “And what if all of these mirrors in every fairy tale was the same mirror?  What if all the glass, all the reflective surfaces were all part of something larger; an amorphous, transformative something that moved between worlds, influencing and meddling and sowing seeds of lust and envy and doubt?” In her introduction, she explicitly mentions the mirrors—and, sometimes, “mirrors”—in the myth of Narcissus, “Snow-White” (which is promenantly featured in this story), “Beauty and the Beast,” “The Snow Queen,” and Through the Looking-Glass and What Alice Found There.
If this is indeed the very same mirror—or fragments of the mirror—from “The Snow Queen” the mirror is was constructed by a very high-ranking demon. “One day, when he [the demon] was in a merry mood, he made a looking-glass which had the power of making everything good or beautiful that was reflected in it almost shrink to nothing, while everything that was worthless and bad looked increased in size and worse than ever. The most lovely landscapes appeared like boiled spinach, and the people became hideous, and looked as if they stood on their heads and had no bodies. Their countenances were so distorted that no one could recognize them, and even one freckle on the face appeared to spread over the whole of the nose and mouth. The demon said this was very amusing. When a good or pious thought passed through the mind of any one it was misrepresented in the glass; and then how the demon laughed at his cunning invention.”
This is only speculation. The true origin of the mirror, however, remains to be seen.
THOSE WHO LIVE LONG FORGOTTEN “RUIN: THE RISE OF THE HOUSE OF KARNSTEIN” (SHORT STORY BY RO MCNULTY)
Release Date: September 2014 (setting is contemporary)
Series: Carmilla
The Story: A teacher gets too close to one of his charges. Too bad she's a vampire. . .
Notes: According to the author, this is the original Carmilla, risen again. Providing further evidence that this vampire is the same Carmilla, her "name" is Marcia Lisle, a near anagram for Carmilla. She previously used this tactic in "Carmilla," where Carmilla itself was an anagram for her birth name, Mircalla. Like all old ladies, she's set in her habits.
THOSE WHO LIVE LONG FORGOTTEN “IMPRISONED, HALF-DEAD: A SYLLOGISM” (SHORT STORY BY JAMES BOJACIUK)
Release Date: September 2014 (setting is late spring 1957)
Series: Sherlock Holmes
Horror Crosses: The War of the Worlds
Non-Horror Crosses: Sherlock Holmes of Baker Street, The Prisoner (see notes)
The Story: A secret faction of what is presumably the British government fakes Sherlock Holmes' death and imprisons him on a faraway island. He plots his escape.
Notes: Holmes mentions how his friend Peter would find his faked death to be deplorably acted. This is an invention of William S. Baring-Gould in Sherlock Holmes of Baker Street, who had Holmes trained in acting and disguise by an old friend, "Lord Peter." "Lord Peter" has no relation to Dorothy L. Sayer's Lord Peter Wimsey.
The methods used in the capture of Sherlock Holmes are identical to those suffered by Number Six in The Prisoner (a kidnapping disguised as death). The site in the story is still under construction. Perhaps Holmes was one of the early prisoners held in the village, though his escape was much more successful.
The story is intended to explain how Holmes could "die" in 1957, but be quite alive when he met the men from UNCLE in The Rainbow Affair and Batman in "The Doomsday Book."
Initially, there is a second prisoner held on the island. Although he dies when one of Holmes' plans backfires. He begs for his life by crying "I told you where Ogilvy's papers were! I told you!" Ogilvy was the well-known astronomer who first sighted the bursts from Mars. It would seem that, before his death, he wrote at length on the curious explosions, then--possibly--wrote some further notes after the initial landing. The British government was proactive in covering up the Martian War, and by 1957 seems all too ready to lock up anyone who claims to remember the war, whether they bargain for their freedom or not.
In case anyone missed it, you can purchase Those Who Live Long Forgotten at Amazon and at Smashwords.
Posted by James Bojaciuk at 12:35 AM