Creepshow is an anthology film series, so not all the stories are necessarily connected.  However, some of the stories have crossover connections that indeed place them within the Horror Universe.

FRIDAY THE 13TH (FILM)
Release Date: May 9, 1980 (Setting is June 13, 1979)
Series: Friday the 13th
The Story: Teens get murdered at Camp Crystal Lake, the victims of Pamela Voorhees. In 1957, Pamela worked at the camp, and her deformed son drowned as a result of bullying peers and irresponsible counselors. In the end, Pamela is killed, and her son Jason is discovered to be alive.


Notes: There are lots of Friday the 13th timelines on the web, that place all of the films using valid reasoning, and yet seem to contradict each other. I even have one on my Television Crossover Universe website. Friday the 13th is brought in via the ninth film, Jason Goes to Hell, that crosses with A Nightmare on Elm Street, Evil Dead, and Creepshow. That is followed up by Freddy Vs. Jason, which I consider the modern equivalent to the great Universal horror crosses of the 1940s. This film has had several sequels, starting with Friday the 13th Part 2. There was a remake in 2009. The film has been referenced as fictional or as an homage numerous times in other films and on television. It has also been spoofed many times.

CREEPSHOW “THE LONESOME DEATH OF JORDY VERRILL” (FILM)
Release Date: May 1982 (Contemporary Setting)
Series: Creepshow
Horror Crosses: Stephen King Universe (the works of Stephen King)
The Story: A country man finds a meteorite which causes a plant to grow over his skin at a rapid rate.
Notes: Creepshow (like its sequels) is an anthology film. It consists of five stories, plus a framing sequence. This story is written by King (who based it on one of his short stories, Weeds, from the May 1976 issue of Cavalier Magazine). In this film version, there are references to Castle Rock, Maine. Thus this story is connected to the Stephen King Universe and the Horror Universe. The crossover only brings this story in, and not the entire film, since they are independent stories. 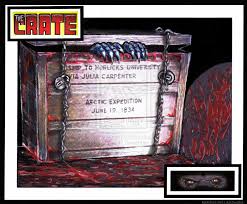 CREEPSHOW “THE CRATE” (FILM)
Release Date: May 1982 (Contemporary Setting)
Series: Creepshow
The Story: A college janitor accidentally discovers a crate that had been hidden away under a set of stairs for 148 years. He notifies a professor and they decide to open it, finding a small but deadly yeti. People die.
Notes: No crossovers in this story, but this story has crossed three times in other stories. The Crate itself appears in Jason Goes to Hell. Two characters from this story appear again in Stephen King’s the Dark Half. And finally, in Creepshow 2 story “The Raft”, a girl is wearing a shirt from Horlick University, the college featured in this story.

From Ivan: In print, Horlick University appeared in King's novel CHRISTINE, where it was located somewhere in Western Pennsylvania (in film it is more likely in Eastern PA, to account for the Crate turning up in Jason Voorhees' New Jersey lake).

CREEPSHOW 2 “THE RAFT” (FILM)
Series: Creepshow
Horror Crosses: The Crate (Creepshow)
The Story: Some teens swim out to an abandoned wooden raft in the middle of the lake, only to find themselves hunted by a creature in the water.
Notes: One of the girls wears a shirt from Horlicks University, which is a fictional school that was featured in the Crate. The Crate was one of the stories from the first Creepshow film, and the crate which is the subject of that story later appears in Jason Goes To Hell: The Final Friday while characters from that story later show up in The Dark Half.

JASON GOES TO HELL: THE FINAL FRIDAY (FILM)
Release Date: August 13, 1993 (Contemporary Setting)
Series: Friday the 13th
Horror Crosses: Evil Dead; Stephen King Universe; Creepshow; A Nightmare on Elm Street
The Story: The FBI finally figures out that there’s a killer at Camp Crystal Lake. Apparently his recent trip to New York City finally caught their attention. They surround him and blow him away. While his body lay in the medical examiner’s office, his spirit possesses someone, and transforms into another living version of Jason. Jason returns to the camp, and kills some more. Upon his death again, he is pulled into Hell by Fred Krueger!
Notes: This film is the ninth of the series, following Friday the 13th Part 8: Jason Takes Manhattan, and is followed next by JASON X, though chronologically for the character the next film would be Freddy vs Jason, as the ending of this one alludes. Jason’s home contains the Necronomicon Ex Mortis from the Evil Dead series. This is later explained in the comic book Freddy Vs. Jason Vs. Ash as a possible reason for Jason’s supernatural status. He also has the crate from the segment called the Crate from the film Creepshow, though no explanation is ever given for that. Evil Dead, the works of Stephen King, and A Nightmare on Elm Street are already all in the Horror Universe. This film’s crossovers bring Friday the 13th in as well. There are several timelines on the web that offer specific dates for the Friday the 13th films, and though they don’t all agree, they all seem to be based on valid analysis. This film is referenced as fictional and paid homage to numerous times in other films and on television. It has also been spoofed in Tales from the Crypt and Viernes 13.
Posted by Robert E. "Robyn" Wronski, Jr. at 9:33 PM