This blog post is about the crossovers related to the 1938 radio adaptation of War of the Worlds, narrated by Orson Wells, which caused a panic.

THE WAR OF THE WORLDS (NOVEL BY H.G. WELLS)
Release Date: 1898 (Contemporary Setting)
Series: War of the Worlds
The Story: Aliens from outer space invade Earth. Eventually, they are defeated, due to their lack of immunities to Earth disease.


Notes: This novel is brought in by many crossovers, as you’ll see in later entries. Though it’s an alien invasion tale, the style of the story also makes it into the horror genre. I know it may be hard to swallow that a world that was invaded by aliens could be the same world of later 20th century horror stories where most of the world believes anything paranormal isn’t real, but the 1980s television series War of the Worlds addresses how the events of the novel, the 1930s radio broadcast, and the 1950s film were all real events in the same shared universe that were covered up and kept from the public.

SUPERMAN: WAR OF THE WORLDS (DC COMICS)
Release Date: 1999 (Setting is 1938)
Series: Superman (Golden Age)
Horror Crosses: War of the Worlds (radio)
The Story: When the Martians invade, it’s a job for Superman!
Notes: This has to be a divergent reality. It ends with the death of Superman and Lois marrying Luthor, as well as major alterations to the entire global political structure and history. In the main Horror Universe timeline, Superman does indeed battle the Martians during the 1938 invasion, as seen in It’s That Time Again: More Stories of Old Time Radio.

IT’S THAT TIME AGAIN 3: EVEN MORE NEW STORIES OF OLD-TIME RADIO “WAR BETWEEN TWO WORLDS” (SHORT STORY BY RICKY LOUIS PHILLIPS)
Release Date: 2006 (Setting is October 30, 1938, during the events of the War of the Worlds radio broadcast)
Series: Superman; War of the Worlds (radio)
The Story: During the second Martian invasion, a “man of action” fights of the invaders.
Notes: The first invasion was told in the 1898 novel version of War of the Worlds. The 1980s War of the Worlds television series ties together the novel, radio broadcast, and 1950s film as having been three previous invasion attempts. The “man of action” has the described characteristics of Superman. The “man of action” is a clue, as Superman debuted in Action Comics # 1. This should be the golden age version of Superman from the comics. But since this anthology is about stories featuring old time radio characters, we should assume this to be the radio version of the hero. This isn’t a contradiction, as a 1980s story in DC Comics’ World’s Finest Comics shows the original Superman of the golden age talking with the original Robin (Dick Grayson) of the golden age about an adventure they had once that was originally portrayed on the radio show. Thus we can assume that the golden age version of Superman from the comics is the radio show version, and that he exists in the Horror Universe, along with all versions of the War of the Worlds up to the 1980s television series.

VINELAND (NOVEL BY THOMAS PYNCHON)
Release Date: 1990 (Setting is the 1960s and 1984)
Horror Crosses: War of the Worlds (Radio)
Non-Horror Crosses: Buckaroo Banzai
The Story: The story of a hippy commune being threatened by the government.
Notes: Ramon Raquello, the orchestra leader from the radio version of War of the Worlds is mentioned, and a band appears called Eddie Enrico and his Hong Kong Hotshots, which is actually meant to be Buckaroo Banzai and the Hong Kong Cavaliers, minus the infringement of intellectual property, of course. 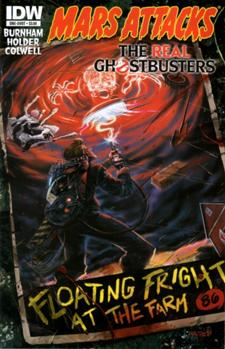 MARS ATTACKS THE REAL GHOSTBUSTERS (IDW)
Release Date: January 16, 2013 (Setting is 1988, during the run of the Now Comics Real Ghostbusters series)
Series: Mars Attacks; Ghostbusters
Horror Crosses: Zombies vs. Robots; Chew; Buffy the Vampire Slayer; War of the Worlds (radio)
Non-Horror Crosses: Popeye; KISS; Transformers; Miss Fury; Opus; Judge Dredd; Star Slammers; Madman; Strangers in Paradise; Rog-2000; Cerebus; Rom
The Story: The Ghostbusters travel to Grover’s Mill, New Jersey to bust the ghosts of the Martians from the 1938 invasion, and encounter a different group of Martians.
Notes: The IDW Real Ghostbusters seems to be set in the late 1980s based on most evidence. This story was part of a major company wide crossover, but unlike DC or Marvel, IDW has mostly licensed properties. Rather than have them coexist, they have one story take place over a range of dimensions. Thus, the Ghostbusters and War of the Worlds links are both to the Horror Universe, but all the other above listed crosses come from alternate realities in the Horror Multiverse. The premise is that these Martians invaded a series of realities. Note that of the above, only Ghostbusters, Zombies vs. Robots, Popeye, Kiss and Transformers actually had comic stories published. The other crossovers come from extra covers that had no accompanying stories, but were still considered to be valid parts of the overall invasion. The Buffy cross comes from one of those covers, for Mars Attacks Spike. This is a cross with the divergent Season 8 timeline.
Posted by Robert E. "Robyn" Wronski, Jr. at 7:52 PM