GLIMMERGLASS: THE CREATIVE WRITER’S ANNUAL, VOLUME 1 “THE BEAST” (STORY BY JOHN SMALL)
Release Date: October 15, 2009 (Setting is 1700s to Contemporary Times)
Series: King Kong (Original)
Horror Crosses: King Kong (2005 remake); War of the Worlds (novel); War of the Worlds (radio); The Mummy (remake film series); Jurassic Park (film series); Kong: the Animated Series; Jurassic Park (novel)
Non-Horror Crosses: Buckaroo Banzai; Tarzan; Flash Gordon; Tales of the Gold Monkey; Journey to the Center of the Earth; Tales of the Shadowmen; Doc Savage; Indiana Jones; Mighty Joe Young; A-Team; Fu Manchu
The Story: Author John Small discovers that the film King Kong was based on true events and gathers research on the true events of the film and the follow-up events that have happened since.
Notes: John Small uses a popular Farmerian method (named for Philip Jose Farmer) in which he places himself in the world of fiction, imagining that fictional stories are based on true events. Here, he melds together the original Kong story, and its sequels, prequels, and remakes, and makes them all fit into one coherent reality. Along the way, he throws in references to other fictional characters who must have been involved in such events based on their stature and the nature of the event. John Small makes official my conjecture that the 2005 film by Peter Jackson is the same events as the original film, just retold with dramatic license from Mr. Jackson. In explaining how the events of Kong could have happened in a world where most people are unaware of the supernatural and the extraordinary, he references other events that have later been covered up, despite their overly public exposure, such as the 1898 and 1938 Martian invasions from War of the Worlds, and the invasion of Mongo from Flash Gordon. DOC SAVAGE and TARZAN employ Denham to return to Skull Island to do documentary filming. Skull Island is said to be "the Menace of the Monsters". Joining in on the expedition were INDIANA JONES, Alex O'Connell (famous for taking down THE MUMMY), and Joshua Williams (from "Joshua Williams Breaks a Date"). (TARZAN couldn't make it due to events seen in TARZAN ALIVE). Roland Tembo is among the expedition as well. Tembo's CINEVERSE counterpart appears in THE LOST WORLD: JURASSIC PARK. SON OF KONG is a fictionalized version of events that actually happened during this expedition. In Kong Reborn, Dr. Jill Drake is involved in this incident. Jill discovers that BUCKAROO BANZAI has moved a clone of KING KONG to BANDUKI. It may be that the events of KONG: THE ANIMATED SERIES may be based on these events, which involve a female scientist who clones Kong then has to release him in a suitable environment. It was followed by KONG: KING OF ATLANTIS and KONG: RETURN TO THE JUNGLE. Among the crew that journeys to Skull Island in the first expedition is Jake Cutter (TALES OF THE GOLD MONKEY). Kong is of the same species as seen in JOURNEY TO THE CENTER OF THE EARTH, TARZAN AT THE EARTH'S CORE, and TALES OF THE SHADOWMEN 3: DANSE MACABRE "The Ape Gigans". Mighty Joe Young is also connected to Kong and one of Denham’s grandsons is tied in as a villain on an episode of the A-Team. Fu Manchu is also said to be the villain secretly behind Jurassic Park.

1932 to 1948--THE WORLD OF KONG:  A NATURAL HISTORY OF SKULL ISLAND--DOC SAVAGE and TARZAN employ Denham to return to Skull Island to do documentary filming.  Skull Island is said to be "the Menace of the Monsters".  Joining in on the expedition were INDIANA JONES, Alex O'Connell (famous for taking down THE MUMMY), and Joshua Williams (from "Joshua Williams Breaks a Date").  (TARZAN couldn't make it due to events seen in TARZAN ALIVE).  Roland Tembo is amongst the expedition as well.  Tembo's CINEVERSE counterpart appears in THE LOST WORLD:  JURASSIC PARK.  SON OF KONG is a fictionalized version of events that actually happened during this expedition.

THE DICTIONARY OF IMAGINARY PLACES (REFERENCE GUIDE BY ALBERTO MANGUEL AND GIANNA GUADALUPI)
Release Date: January 1, 1980 [expanded in 1999] (Setting is 1980 and 1999 in expansion)
Horror Crosses: King Kong; The Legend of Sleepy Hollow; The Siege of the Red House; The Stepford Wives; The Masque of the Red Death; Shadow: A Parable; Silence: A Parable; Jurassic Park; Lovecraft’s Cthulhu Mythos
Non-Horror Crosses: The book has 730 entries, all crossovers. Buy the book.
The Story: This is a reference guide to places that people who live within this shared fictional reality could visit.


Notes: This list of fictional settings is written under the premise that they are all real places that people could visit. Considering the above crosses, it clearly fits in the Horror Universe. Note that this brings J. Sheridan le Fanu’s The Siege of the Red House, and three works of Poe (The Masque of the Red Death, Shadow: A Parable and Silence: A Parable) into the Horror Universe.

December 1993--WAYNE'S WORLD 2--The famous water glass scene is parodied when Wayne and Garth are scouting a location for Waynestock. Even a dinosaur makes an appearance.

THE LOST WORLD: JURASSIC PARK (FILM)
Release Date: May 23, 1997 (Contemporary Setting)
Series: Jurassic Park
Horror Crosses: King Kong; GODZILLA
NON-HORROR CROSSES: LAST ACTION HERO
The Story: Turns out there was another island, and they think it’s a great idea to bring a dinosaur into civilization.
Notes: The ship that brings the dinosaur to the United States is the Venture. The Japanese tourists running from the rampaging T-Rex in the San Diego scene are saying in Japanese: "I left Japan to get away from this?!"  In the San Diego video store, there is a poster advertising a movie with Arnold Schwarzenegger as King Lear.  This film follows Jurassic Park and is followed by Jurassic Park III. This film has been referenced as fictional and paid homage to numerous times in other films and on television. It has also been spoofed in Jane Austen’s Mafia, Inspector Gadget, The Mummy Returns, and Jurassic Park III. **UPDATED**

1998--TRESPASSER--This game takes place on the same island as this film, and was intended to be released as a film tie-in.

February 2002--BIG FAT LIAR--After the flood water is turned on and trips up Marty Wolf, he crashes into a sign at a fork in the road. The sign reads "Isla Nublar", which is the island in which Jurassic Park takes place.

March 2002--SMALLVILLE--"Nicodemus"--When Clark, Chloe and Pete are talking about the flower, he mentions the creation of the park.

March 2004--METAL GEAR SOLID: THE TWIN SNAKES--In the Briefing, when they're talking all about genetic engineering, Snake says it sounds like a "dinosaur theme park".

May 2005--FAMILY GUY--"North by North Quahog"--On finding a hotel to spend the night while their car gets fixed, Peter and Lois encounter a hooker, much to Lois’ concern. Peter reassures her by saying “Keep absolutely still, Lois; their vision is based on movement,” a reference to Jurassic Park in which the main protagonist (Alan Grant) has a similar (and equally erroneous) line when they encounter a Tyrannosaurus, as well as a reference to the general concept of avoiding movement-based-visioned predators by remaining still. (This same hooker is seen with Charlie Brown in “Mother Tucker.”)  After Chris is caught drinking, Flint from the cartoon G.I. Joe gives an educational message, like he (and others) did on the real G.I. Joe show. He is even voiced by his original actor, Bill Ratner.

August 2005--BARNEY: THE LAND OF MAKE BELIEVE--Barney and friends walk under a "Jurassic Park" sign, while the movie's theme music plays.


NOV - Janos Schablotski agrees to join the Dreamship Escapade every year in November, and brings aboard his friend Adam Kennedy. On this year's voyage they return to the Dreamlands and Janos discovers he can transform at will into a werewolf while in the magically-charged realm. Janos meets fellow traveler Allison Wonderland, who also opts to ally herself with the Escapade. They mistakenly return to the TVCU on Isla Sorna, aka Jurassic Park, and have to contend with the faux dinosaur population while hunting down batteries and other resources for their remaining travels. 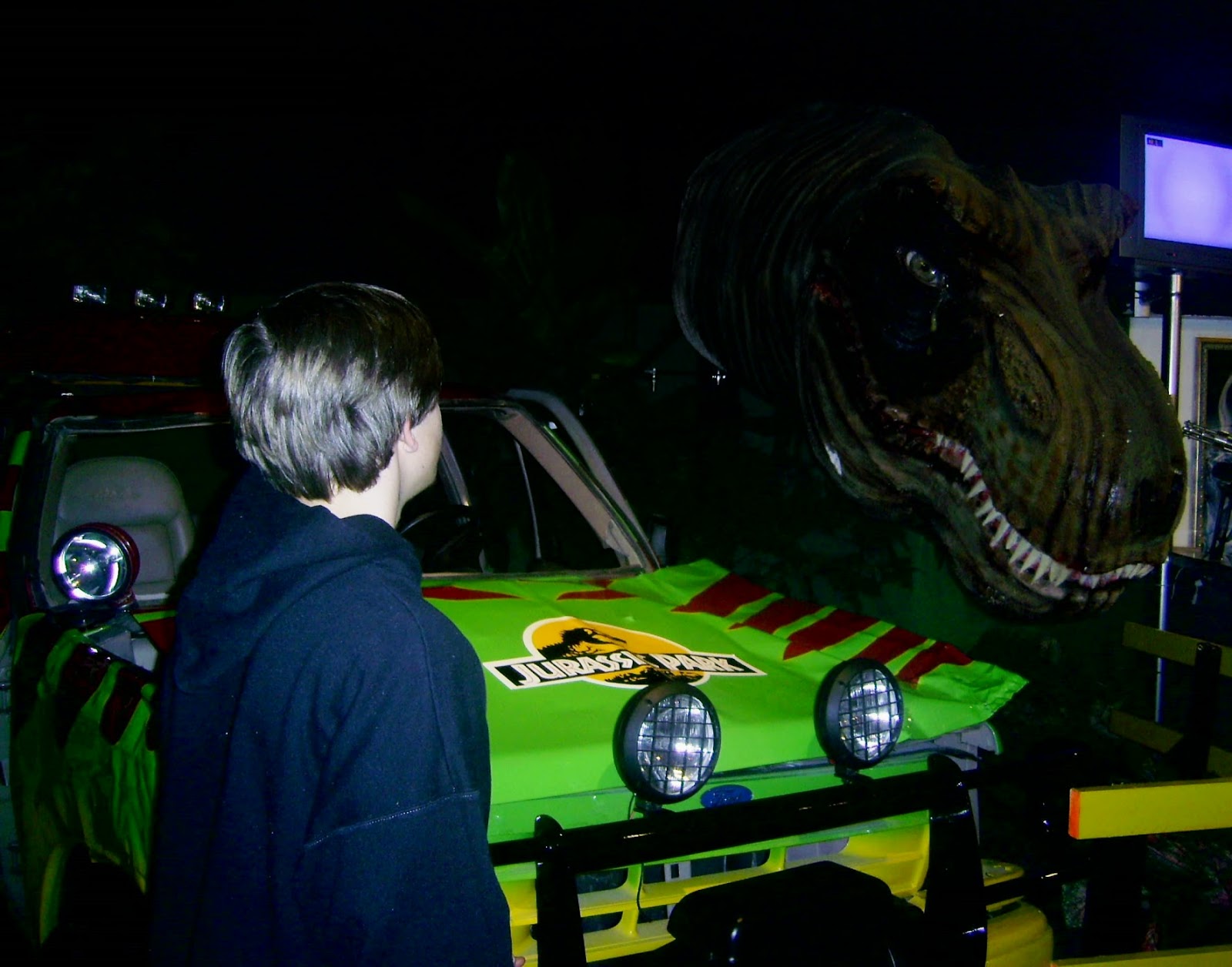 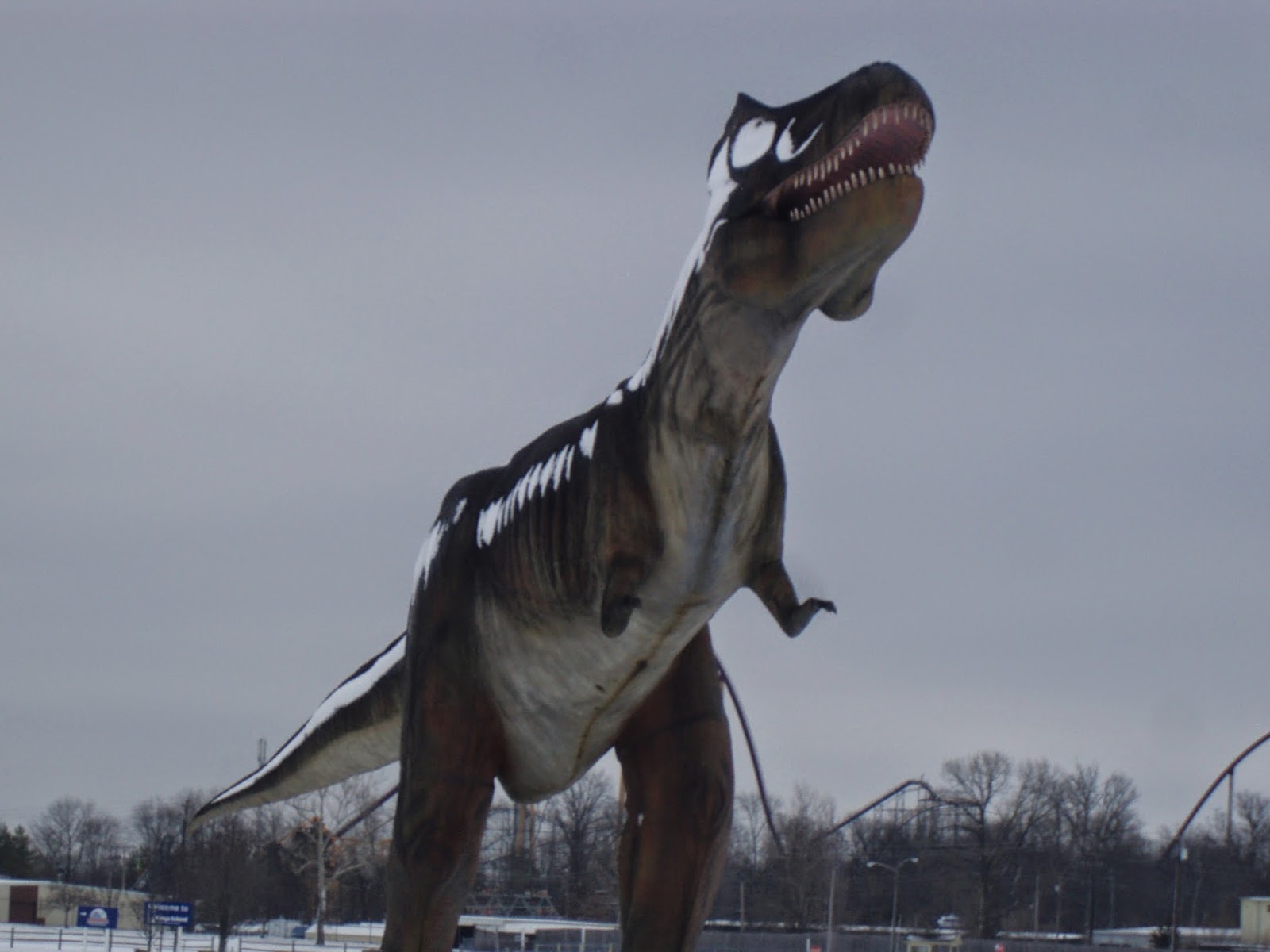 The Dreamlands is a collective dimension created by H P Lovecraft, showing up frequently within his Dream Cycle of stories (beginning with POLARIS in 1918). The Escapade and her crew are inspired by Lewis Carroll's The Hunting of the Snark (1876). Adam Kennedy and Allison Wonderland are part of Janos' supporting cast, though Alison's name is a tribute to the Carroll novel Alice's Adventures in Wonderland (1865). Jurassic Park is from the 1990 novel JURASSIC PARK and a series of books, movies, and games that further the story.

November 2008--FAMILY GUY--"Tales of a Third Grade Nothing"--Peter's journey to the executive bathroom is a reference to Jurassic Park. John Hammond welcomes Peter and the music played while the helicopter flies above the island was used in the movie. Peter using the restroom and commenting on how peaceful everything is also a reference to a far different scene in the movie when a lawyer was eaten by a Tyrannosaurus Rex after attempting to hide in a bathroom stall.  Emperor Palpatine appears at the Quahog Cabana Club. He requests the song "On The Dark Side" by John Cafferty & The Beaver Brown Band.  Yosemite Sam is seen trying on jeans at Barney's, a famous clothing store in New York City.

November 2011--JURASSIC PARK: THE GAME--The Sarah that Gerry and Jess refer to is the same Sarah from LOST WORLD.

March 2012--UGLY AMERICANS--"The Roast of Twayne the Boneraper"--Jurassic Park is one of the "failed liberal projects" found beneath the sea.

January 3, 2014 · Stuart, FL
The KARATE FIGHTERS toy line is basically Rock-em sock-em robots only with human/monster fighters the plot being they're have a trounment in addition to the original characters they also had KARATE FIGHTERS of Batman the joker form Small soldiers Chip Hazard and Archer Duke and A neo viper form G.I. Joeanother of the fighters seems to be one of the Red Ninja clan form g.i.joe the final 2 figures of the line are raptors fortJurassic park http://www.mastercollector.com/…/reviews/review061105-13.htm

January 11, 2015
A crossover between Jurassic Park and Science.

June 2, 2015
LEGO Dimensions is growing to include characters, vehicles and gadgets from The Simpsons, Doctor Who, Ghostbusters, Portal, Jurassic Park, Midway Arcade, LEGO Legends of Chima and Scooby-Doo!
Get ready to build, rebuild and ‪#‎BreakTheRules‬

A Jurassic World Transport Crate Has Appeared in the Middle of a London Train Station
London's Waterloo Station has an attention-grabbing piece of cargo passing through: a crate made to hold "predatory livestock" for Jurassic World's fictional…
ADWEEK.COM

September 2015--TWO FORTY-SIX--Isla Nublar can be seen on Wilford's chalkboard.

July 3012--FUTURAMA--"The Thief of Baghead"--An exhibit featuring a T-Rex at the aquarium, entitled Jurassic Tank, is introduced by a John Hammond-esque man to music similar to the Jurassic Park theme tune.

ALTERNATE REALITIES: Several television and web shows have done parodies of Jurassic Park and its sequels.

TVCU-52--Horror Universe-Pretty much everything that happened to Ivan would qualify, but in general Ivan is not legitimate enough to justify including in the book (well, maybe in the Forward).  But, since this isn't the book, I'm going to list the various franchises with which the HCU Ivan Schablotski has had crossovers (minor connections are in italics and crossovers that don't involve Ivan, such as INUYASHA or JURASSIC PARK, are not included at all, but many crossovers that are not considered as canon in the TVCU, such as BLADE II and SCOOBY DOO, are acceptable in the HCU, so it all balances out).