Donald F. Glut has connected all of his works, from comics, novels, and films.  His works fit within the larger Horror Universe/Television Crossover Universe.

Every Thursday, I post a blog post here with excerpts from the Horror Crossover Encyclopedia, related to a particular series from horror movies or television.

I've chosen for this post to only cover the films of Donald F. Glut, though they do connect to his written, published works as well.  For the full Donald F. Glut crossover experience, please read the Horror Crossover Encyclopedia, which you can purchase here. 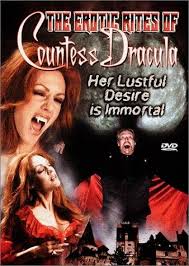 THE EROTIC RITES OF COUNTESS DRACULA (FILM)
Release Date: 2001 (Set in 1965 and Contemporary Setting)
Series: Countess Dracula (Donald F. Glut)
Horror Crosses: Dracula (novel); the Vampyre
The Story: Up and coming rock musician Scarlet Brooks is turned into a vampire by Dracula in 1965 Hollywood. He then leaves her in the care of Renfield in his Hollywood home while he returns to Transylvania. In the present she has become one of those whiny vamps that cry about how much they are cursed with their immortality. She orders Renfield to help her find a cure for vampirism or else she will find a way to end her own life.


Notes: Scarlet Brooks should not be confused with Elizabeth Bathory, who is also referred to as Countess Dracula. This film is followed by a sequel, Countess Dracula’s Orgy of Blood. As established in the earlier Spektor comics, the Dracula used in Glut stories is the original from Bram Stoker’s novel. Dracula’s role is actually small in this film though important. The fact that he has to rush back to his home in Transylvania leads me to think he is indeed the true Count. It’s well established that Dracula must return to his native soil to preserve his power. Soul clones tend to be created for the purpose of being agents around the world, so if he was a soul clone, why rush back to Transylvania? And if he was a Son of the Dragon, his home wouldn’t be Transylvania necessarily. Of course, he could have been just some vampire posing as Dracula and just being a sleaze ball, ditching his responsibility after turning the girl. But for series continuity sake, let’s assume Donald F. Glut uses the same Dracula in all of his stories. The book of magic Renfield procures to cure Scarlet’s vampirism is the Ruthvenian, frequently used in Glut’s works, and a reference to Lord Ruthven from the Vampyre. Finally, this isn’t the original Renfield. The original never got the immortality Dracula promised. This is a descendant, in a long line of Renfields to serve Dracula, another indication that this would be the true Count Dracula.

THE MUMMY’S KISS (FILM)
Release Date: 2002 (Contemporary Setting)
Series: Mummy’s Kiss
Horror Crosses: The Mummy (Universal); Frankenstein (Donald F. Glut); The Occult Files of Doctor Spektor; Countess Dracula
Non-Horror Crosses: Dinosaur Valley Girls
The Story: An Egyptian mummified sorceress is accidentally revived in modern times and she seeks to seduce a woman who strongly resembles her past lover.
Notes: The Mummy’s Kiss is followed by The Mummy’s Kiss: 2nd Dynasty. The setting is Whemple University, clearly named for the archeologist from Universal’s The Mummy. Additionally, in the film's credits, the estate of Stephen Banning is thanked. Banning was also from the Mummy. The sorceress of this film previously appeared in Donald F. Glut’s novel Frankenstein in the Mummy’s Tomb. The closing credits of the film also thank Dr. Adam Spektor. Three university students mention the Scarlet Countess nightclub, which is from the film The Erotic Rites of Countess Dracula. Dr. Benjamin Michaels also appears (sort of, on the other end of the phone), who is from Dinosaur Valley Girls.

FRANKENSTEIN IN THE MUMMY’S TOMB (NOVEL BY DONALD F. GLUT)
Release Date: November 2002 (Contemporary Setting)
Series: Frankenstein (Donald F. Glut)
Horror Crosses: The Interconnected Works of Donald F. Glut; the Occult Files of Doctor Spektor; The Mummy’s Kiss
The Story: Professor Waldo Daugherty of the Marshall Natural History Museum and his assistent Professor Ward Greene go in search of the tomb of the evil Egyptian wizard Im-Kha-Ra. (Why are all unearthed mummies evil wizards?)
Notes: It should go without saying that the Frankenstein Monster is involved, which Mr. Glut assures me is THE monster, not a poser. Im-Kha-Ra worships the Dark Gods. The Dark Gods and the Marshall Natural History Museum are both from many Glut stories. Im-Kha-Ra is compared to Ra-Ka-Tep, who fought Dr. Spektor, and Hor-Shep-Sut from the Mummy’s Kiss.

COUNTESS DRACULA’S ORGY OF BLOOD (FILM)
Release Date: 2003 (Contemporary Setting)
Series: Countess Dracula
Horror Crosses: Dracula (novel); The Vampyre; El Hombre Lobo; The Occult Files of Doctor Spektor
The Story: Dracula returns to L.A. and learns that Lord Ruthven and Ruthven’s sister Diana had been staked nearby in 1897, so he sends his daughter Martine and his lackey Renfield to revive them.
Notes: Though this is a sequel to the previous Donald F. Glut film, the Countess of this film is actually Martine. The Dracula of this film is the same from the previous, which I suspect is the same Dracula from Stoker’s novel. Lord Ruthven is from the Vampyre. Angel, the vampire from the series of the same name, has claimed that the Vampyre was based on him, which would mean that he was Lord Ruthven. I’m a big fan of that idea, but this film and only this film seems to contradict that. It could be that Angel was making it up. Or it could be that the Ruthven here is not the same chap from the Vampyre. The film credits give thanks to Waldemar Daminsky, who was El Hombre Lobo from that series of films. Spektor is also thanked.

THE MUMMY’S KISS: 2ND DYNASTY (FILM)
Release Date: 2006 (Contemporary Setting)
Series: The Mummy’s Kiss
Horror Crosses: The Interconnected Works of Donald F. Glut; Occult Files of Doctor Spektor; Dracula (novel); Mummy (Universal); Frankenstein (Donald F. Glut)
Non-Horror Crosses: Dinosaur Valley Girls
The Story: An aging beauty makes a pact with an Egyptian goddess for eternal youth and finds it to be a curse.
Notes: Setting is the Marshall Museum of Ancient History, a connection to Glut’s other works. Doctor Spektor is an attendee at a museum lecture. (He is played by himself according to the credits!!!) A Renfield attends the lecture as well, likely a descendant of the Renfield from Bram Stoker’s Dracula. There are numerous references to the Universal Mummy series including Whemple University, Imhotep, tana leaves, the High Priest of Karnak, the Banning family, Youssef Bey and Klaris. Hor-Shep-Sut was also mentioned in Frankenstein in the Mummy’s Tomb. Tony Markham also is mentioned, who is from Dinosaur Valley Girls. This is of course a sequel to the Mummy’s Kiss.

BLOOD SCARAB (FILM)
Release Date: 2008 (Contemporary Setting)
Series: Countess Dracula; Mummy’s Kiss
Horror Crosses: Carmilla; Dark Shadows; Donald F. Glut’s Interconnected Works; The Occult Files of Doctor Spektor
The Story: Dracula has recently married Elizabeth Bathory but perishes when he miscalculates sunrise due to Daylight Savings Time. Bathory enlists Renfield to find her a way for her to become immune to sunlight.
Notes: This film is a sequel to both the Countess Dracula and Mummy’s Kiss series of films by Glut. Renfield whines that Dracula should have married a Karnstein (as in Carmilla) or a Collins (referencing Dark Shadows). The Marshall Museum of Ancient History appears, which is a satellite of the Marshall Museum of Natural History from a multitude of Glut stories. A book Renfield researches is translated by Dr. Adam Spektor. Elizabeth Bathory was a real historical figure who is said to have bathed in human blood to maintain her youth. She has become a vampire in fiction, but because she is based on a real person, I don’t count her for crossover purposes.

For more crossovers with those linked above, see the following: