Damn it's Good to be a Gangster: The Kingpin in the TVCU 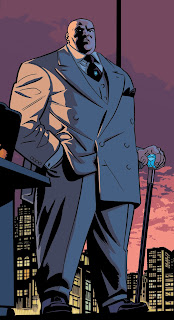 The underworld will now be run like a Business.. and the Chairman of the Board will be ..The Kingpin!-- Wilson Fisk 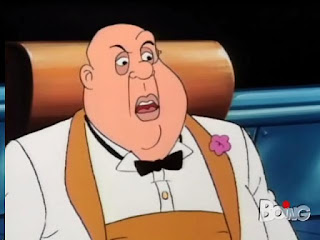 September 1988 to September 1989--Police Academy: The Animated Series-- In Many Episodes Officer Carey Mahoney Battles the Kingpin and  His Council of Crime 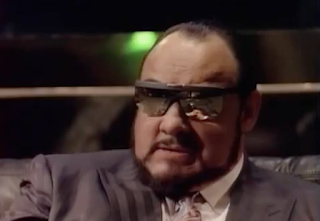 1991--RAMBO Y SUS TITANES(Rambo and his Titans)Fisk Teams up  with the Forces of Savage to Battle Officer Carey Mahoney and friend and John Rambo and his force of Freedom in some sort of underground fighting tournament.Near has I can tell this was made by a South american toy company to promote the Rambo and Police academy toy-lines 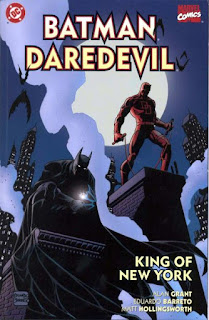 To Quote Robert on this one "Spring 1995--BATMAN/DAREDEVIL: KING OF NEW YORK(2000)--The two vigilantes team again, this time against the Kingpin, the Scarecrow, and the Catwoman. The Kingpin here is like his Marvel counterpart. The Scarecrow is not the original, but an obsessed "fan." And the Catwoman here is a former secretary who after a near death experience, loses it and turns to crime."

July 1995--Crime Wave video Game (1990)--The Kingpin and the Forces of M.O.B. Kidnap the President's daughter. However their plot goes awry thanks to crime fighter Lucas McCabe. the Kingpin Seemingly Dies here but I believe he fakes his death and starts operating more underground to rebuild his Empire. 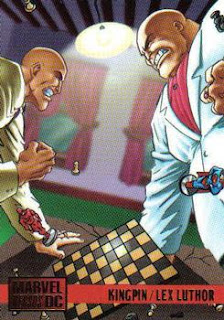 1996--Marvel VS DC/DC VS Marvel Trading Card Set--Wilson Fisk and Lex Luthor go to war.Probably while Trying to take over The Metropolis  Crime scene 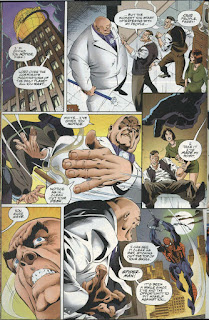 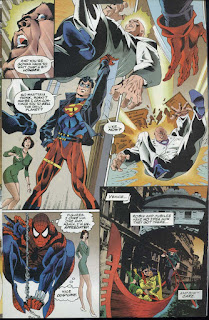 1996--Marvel V.S. DC # 4 During his war  with  Lex Luthor  Wilson Fisk buys the Daily Planet  only to be taken down by Super-Boy and Spider-Man 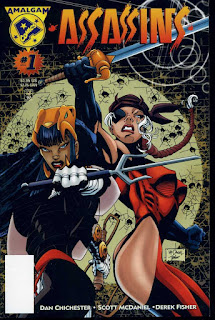 1996--Following his Recent losses Wilson Fisk puts a price on his Head to lead the killers for hire  Catsai and Dare into a trap things do not go well leading to his biggest defeat  yet. 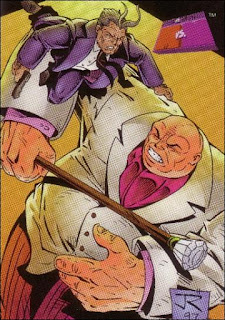 Early 1997--Marvel Vs WildStorm Trading card set-- Wilson Fisk and Lord Emp leader of the WildC.A.T.S. go to war.Probably while trying to take over the L.A. Crime Scene 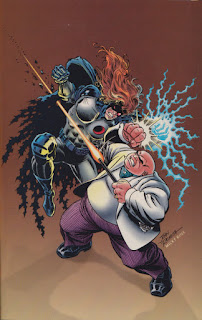 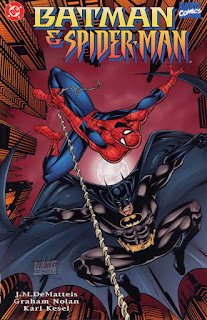 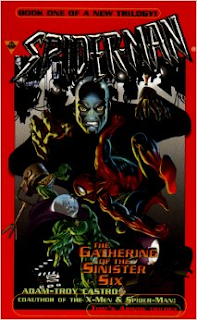 (quoting Robert SPIDER-MAN: THE GATHERING OF THE SINISTER SIX (NOVEL)
Release Date: March 1, 1999 (Contemporary Setting)
Series: Spider-Man
Horror Crosses: Scooby-Doo! (revival film series)
Non-Horror Crosses: Invaders; Captain America; Human Torch (golden age); Sub-Mariner; Casablanca; Hulk; Jackie Chan Adventures; Terry and the Pirates; Silence of the Lambs/Hannibal; Fargo; Trading Places/Coming to America; The Great Race; North by Northwest; Indiana Jones; Marathon Man; Smilin’ Jack; Iron Man; Sherlock Holmes; Die Hard; Fu Manchu; James Bond; Superman (modern age); Law & Order; Ellery Queen; Batman (Burton/Schumacher film series): Usual Suspects; Carmen Sandiego; Unbreakable; Maltese Falcon; NYPD Blue
The Story: A new Sinister Six is formed.
Notes: Because of the appearance of the Mystery, Inc team, and not as 40-somethings, this must be the team from the newer animated films that started with Scooby-Doo on Zombie Island. This film series continues with all the previous animated series as canon. In Zombie Island, the gang are all adults, post college. Velma has a Master’s degree. The team had split up and in Zombie Island are reunited. So the “kids” here are now in the mid-20s, in a time period that is contemporary with release dates based on pop culture and technology. In the Horror Universe, the “kids” should be in their 40s. Furthermore, based on evidence from Looney Tunes: Back in Action, it’s likely the revival films are fictional in the Horror Universe, being fictional films about Mystery, Inc. However, Mystery Incorporated (in a divergent timeline) has an appearance of the Hex Girls, a fictional band that originated in revival series film Scooby-Doo and the Witch’s Ghost. Based on the crossover rules I am using, that would place the revival film series if not in the Horror Universe main timeline, at least in a divergent timeline. And indeed, it must be placed in a divergent timeline. Thus,Spider-Man: Gathering of the Sinister Six should be placed in that divergent timeline. [Note that 99% of the Horror Universe, from my Horror Crossover Encyclopedia, is exactly the same reality as the Television Crossover Universe. And both share the same multiverse


2011--Marvel vs. Capcom 3: Fate of Two Worlds--Following an attack on Earth by the being known as Galactus that was Stopped by a large team up of Heroes and Villains.  Interpol agent Chun -Li  Arrests the Kingpin for his many crimes.