Toby O'Brien is not a post contributor.  But he is a member of the TVCU Crew.

Toby O'Brien has his own website, Inner Toob, also known as the Toobworld Dynamic.  His website was one of three that inspired me to present my Television Crossover Universe to the world via this website.

Toby joined In on our Facebook group from the beginning, and was very active in contributing to our discussions.  When the TVCU Crew was founded, I decided to name Toby as a founding member of the crew without inviting him to contribute, because he already had his hands full with his own very successful website.

Toby's website has continued to be a extremely useful tool for my own research, and Toby himself continues to provide me with valuable information. 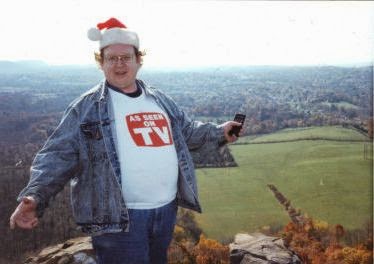 Toby's website also participated in our April Fool's Day Crossover Event from a few years ago.  As James, Ivan and I posted about our fictional TVCU counterparts, Toby also posted that day about his fictional Toob World counterpart on his site.

When I presented the idea of these bios to the TVCU Crew, I gave them a short interview questionaire, purely optional.  Here are Toby's answers:


My interest in crossovers began in earnest with the following books:
Suspects
The Magic Umbrella
The Incompleat Enchanter
So many Sherlock Holmes pastiches!
(But especially The Adventure of the Peerless Peer)
Silverlock
Ishmael (a Star Trek novel)
and of course the Wold Newton Universe research begun by Philip Jose Farmer and ably continued by Win Scott Eckert and Sean Lee Levin with assists from so many others.
And I'm always being inspired by my comrades in the various crossover forums in Facebook, of course!

Career in Writing and Entertainment
I put in a few years acting in off-Broadway shows and doing some extra work in a couple of movies. And I got paid for writing the book for a community theatre's production; something for them to hang some songs on. But now I'm focused on getting my Toobworld adventures knocked into shape.


1. Your favorite crossover. -
'Maverick' - "Hadley's Hunters"
Probably the first crossover in which Bart Maverick got to meet the cowboys of 'Bronco', 'Sugarfoot', 'The Lawman', 'Cheyenne' - on a technicality - and as for 'Colt .45'... missed it by thismuch. There was also a veiled reference to Steve McQueen's Western, 'Wanted: Dead Or Alive'. Still not good enough for me, LOL! I think the appearance by Robert Colbert was actually Dr. Doug Phillips in disguise from 'The Time Tunnel'.

2. Your favorite TVCU blog post. -
That's a tough call. They're all so good, filled with exhaustive detail. It surprises me to see how much you always find even for a show I would have assumed had a paucity of possibilities. But if I had to judge, I'm going to stick with the blog post for my favorite show, 'Doctor Who'. It's great that the TVCU is always updated....
Allow me to plug it for you guys!
http://www.televisioncrossoveruniverse.com/2011/04/the-doctor-who-universe.html

3. Your favorite post that you wrote, if applicable. -
Dr. Loveless Family Tree & the look at Frank Morgan's short-lived sitcom

The reason these two stand out for me is because of the responses I got for them. One was from a family member of Michael Dunn who loved the history I put together about the diminutive madman. And with that sitcom, I heard from the recording secretary of the Screen Actors Guild. She had searched everywhere for more information about it, but then realized that I posted it on April Fool's Day......

The Doctor Loveless genealogy was on my old "Toobworld Dynamic" website. Luckily I printed out every month and one day will get them back into the Net.

4. Your favorite podcast episode. -
I'd say the early ones which gave me voices to put to the names I know.

5. Your favorite podcast guest. -
Micah Harris! I'm honored to have been in contact with him in the past.

But check out my Facebook pages for "TVXOHOF" and "The Toobworld Dynamic". Like Robert once chided me, it was about time I ventured into maintaining such pages!

But otherwise, who knows when I'll get my Toobworld adventures finally published?


The Doctor Who Universe
A blog about television crossovers.
televisioncrossoveruniverse.com