I covered William Shakespeare's Macbeth a little while ago, so on to Hamlet.

16th Century--HAMLET 2--Hamlet and Jesus have time travel adventures.  (Okay, this was a fake play within a comedy film, but I just had to include it.)

1897--THE PURSUIT OF THE HOUSE-BOAT--This story features many characters in the afterlife including SHERLOCK HOLMES, HAMLET, SHYLOCK, LECOQ, HANKSHAW, MAN FRIDAY, PORTIA, JIM HAWKINS, OPHELIA, TRILBY, THE COUNT OF MONTE CRISTO, THE OLD SLEUTH, THE THREE MUSKETEERS and numerous other biblical and historical characters. 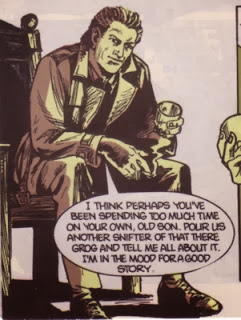 
Notes: Hellblazer is already in vias a cross with Doctor Who that also had a Lovecraft connection. Hellblazer and the other Vertigo series were only loosely connected to the DC Universe. For the most part, they maintained a separate reality, and instead of operating on “comic book time”, things moved in a normal time frame. Jerry has a copy of Jorkins' notes, the Unaussprechlichen Kulten, and the Necronomicon in his collection (all from Lovecraft’s Cthulhu Mythos). He also has a coffin implied to be that of Dracula and Dorian Gray’s portrait. Additionally, he has the Maltese Falcon and remnants of the ship that chased Moby Dick. From other realms, he has the Mad Hatter’s Hat (from Alice’s Wonderland) and the corpse of the Tic-Toc Croc (of Neverland, as in Peter Pan). Jerry’s shop is in the same town as the Admiral Benbow Inn, meaning they are in Black Hill Cove from Treasure Island. The collector also has other non-cross items from fairy tales and folklore. All the other crosses listed above come from the land of fiction. This is a pocket realty within the Horror Multiverse where imaginary characters exist. This may be the same realm as Imaginationland that is attached to the divergent timeline of South Park.

1990--ESCAPE FROM HELL--The story involves Richard and Alan, two real life employees at EA, getting sucked into Hell with Richard's girlfriend, Alison. Richard has to save the two while fighting off the forces of Hell and eventually get back to Earth. Aiding him along the way are a variety of allies, ranging from evil historical figures such as Stalin and Ghengis Khan, to powerful rogue demons, to fictional characters such as Hamlet. The story never takes itself seriously at all, retaining a sense of humor the whole way through.

AMERICAN DAD! (ANIMATED SERIES)
SEASON 5 EPISODE 9 “RAPTURE’S DELIGHT”
Release Date: December 13, 2009
Other Crosses: Monty Python and the Holy Grail; Mad Max/The Road Warrior; Star Wars; Hamlet
The Story: The rapture comes. Stan and Francine are left behind as they were having sex in church when it occurred. Time passes in a post-apocalyptic future where Stan and Francine help Jesus battle Satan.

Notes: Jesus is wearing two holy hand grenades. Characters at the bar are from the Road Warrior. Another character comes from Empire Strike Back. Jesus mentions his father’s dead jester, a reference to Yorick from Hamlet. It should be noted that since American Dad is so intertwined with Family Guy, both created by Seth MacFarlane and sharing the same writers and animators, this Jesus is probably the same version as in Family Guy. Though there are many depictions of Jesus appearing in series within the Cartoon Universe (most notably on South Park, for instance), MacFarlane’s version stands apart as a separate being, for in one episode of Family Guy, he admits he’s not real. This means that he is in fact a tulpa. This doesn’t mean that there isn’t a real Jesus. It just means that the MacFarlane depiction of Jesus is not him. He is a manifestation created by the psychic energy and imaginations of those who exist in the Cartoon Universe, particularly in the regions of Quahog, Langley Falls, and Stoolbend. Incidentally, although the Jesus from South Park seems to be real, as he lives in the town and has his own talk show, he has also been depicted as a resident of Imaginationland, a domain where characters who are fictional within the Cartoon Universe exist. It’s never made clear if the Jesus who lives in South Park and the Jesus from Imaginationland are the same beings or two separate entities. Since we are talking about the intertwining of the MacFarlane shows, another interesting note is the depiction of the musical duo Hall & Oates in this episode. John Oates had been ruptured, leaving Daryl Hall behind. This conflicts an episode of the Cleveland Show where Oats is depicted as a devil while Hall is an angel. Finally, this episode ends with Stan being killed, and going to his personal heaven. His personal heaven is the world before the Rapture. Thus, every episode of American Dad, and any series connected to American Dad, after this point is in fact existing in Stan’s personal heaven, not the real Cartoon Universe, as the rapture did occur in the Cartoon Universe. However, to keep my brain from exploding, I’m going to consider this episode to be a divergent timeline, and believe that in the main Cartoon Universe, the rapture has not come yet. Thus, Stan’s reward was simply to have the original timeline restored. But, since we’ve also brought Supernatural into the Cartoon Universe, it should be noted that in that series, around this time, Sam Winchester did indeed begin the apocalypse, though most people hadn’t realized it had begun. In a future five years later, Dean saw a world overrun by Zombies, and a battle against Satan, but the Winchesters managed to avert this timeline from existing. It’s possible that the main body of this episode is in the same divergent timeline that Dean Winchester visited, and that Stan was able to return to the main timeline because Dean and Sam stopped the apocalypse. And that’s a lot of deep thoughts for a show that makes money off of fart jokes.