Remember the 70s?  I was born in 1972, and to me, the 1970s was a magical period where everything on TV seemed wonderful.  Yes, my family watched Donny & Marie.  In retrospect, I'm not sure why.  I guess it's because our television channels were limited to three networks, PBS, and two independent stations, and VCR's weren't even a thing yet.  So Donny & Marie was the best thing on among those six channels.

November 1972--HERE'S LUCY--"Lucy and Donny Osmond"--Lucy and Kim attend a Donny Osmond concert with cousin Patricia (Eve Plumb), who is crazy for the 14 year old singer. Donny, spots Kim in the audience, and he falls in love at first sight. Kim believes the flowers and letters are for Patricia, but soon discovers the mix-up. Realizing Donny volunteered to perform at Kim's Charity function because of the mix-up, Kim feels obligated to set the record straight. 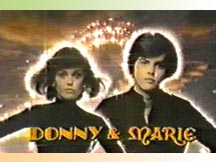 1978--GOIN' COCONUTS--Donny and Marie play themselves in this crime comedy.

June 2, 1995--SPACE GHOST COAST TO COAST--"Fire Drill"--Space Ghost interviews David Byrne and Donny Osmond. At the end of the episode, a fire drill interrupts the interview with Osmond.

1997 to 2004--JOHNNY BRAVO--Donny Osmond appeared in four episodes as himself.

November 1999--DIAGNOSIS MURDER--"The Mouth That Roared"--Donny and Marie had a short lived talk show in 1999, which was featured in this episode.

April 2000--MOVIE STARS--"Video Gurl"--Donny and Marie Osmond appear on this show that's so obscure, it could almost be as fake as THAT'S OUR RALPH, but it was indeed a real sitcom.

February 2004--FRIENDS--"The One Where the Stripper Cries"--Joey appears on Pyramid, hosted by Donny Osmond.

November 2006--ALL MY CHILDREN--Donny Osmond appears in Pine Valley to appear on Erica Kane's talk show.