Attack of the Killer Tomatoes! 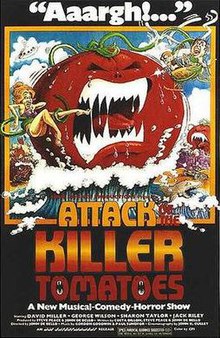 1978--ATTACK OF THE KILLER TOMATOES!--A group of scientists band together to save the world from mutated killer tomatoes. 
Notes: Superman makes a cameo appearance, but doesn’t really affect the plot. This would likely be the second Superman, Clark Kent Junior. This film follows Attack of the Killer Tomatoes and is followed by Killer Tomatoes Strike Back. Matt Hickman adds: In Return of the Killer Tomatoes Igor has a diploma from The Ted Baxter School of Journalism.  The Marx brothers are also in the crowd scene at the end

ATTACK OF THE KILLER TOMATOES (ANIMATED SERIES)
Release Date: September 8 , 1990 - November 23, 1991 (Contemporary Setting)
Series: Attack of the Killer Tomatoes
The Story: An evil scientist tries to take over the world with mutated tomatoes.
Notes: The below cross brings in not only the cartoon, but the original film series the cartoon is based upon. This series is mentioned in the series Home and Away as fictional. The animated series is set five years after the original film, but it's also immediately following the events of Return of the Killer Tomatoes, which was 10 years later. So that five year date must be wrong. The animated series is in the same canon as Return, and is referenced in the fourth film, Killer Tomatoes Eat Paris!

SEASON 1 EPISODE 3 “TOMATOES FROM THE BLACK LAGOON”
Release Date: September 22, 1990 (Contemporary Setting)
Horror Crosses: Creature from the Black Lagoon
Non-Horror Crosses: Hulk (Comic)
The Story: This week’s adventure takes the heroes (and villains) to the Black Lagoon, and there is an encounter with the Hulk at the airport.
Notes: This cross with Creature from the Black Lagoon brings the Attack of the Killer Tomatoes films and cartoon into the Horror Universe. It also brings the comic book version of the Hulk in. The TV version is brought in via a crossover with Kolchak. 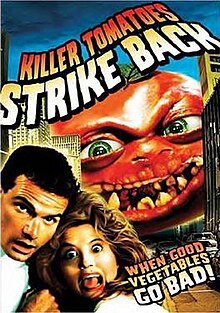 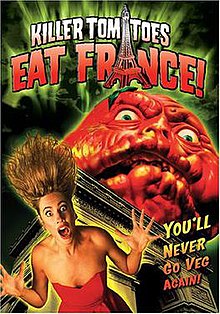 1991--KILLER TOMATOES EAT FRANCE!--The characters of Zoltan, Kethuck and Viper are borrowed from Attack of the Killer Tomatoes: The Animated Series, but are given completely different appearances. Zoltan was redesigned with an eyepatch and various stitching over his body, Ketchuck was refined as a Larry Fine character and was no longer drooling and obese like his cartoon counterpart, and Viper was based on a similar character, Fang, another snake-based tomato.

TOMATOVERSE-2--So if Attack takes place in a divergent timeline that we may call the Tomatoverse, then perhaps the planned remake would be Tomatoverse-2?
Posted by Robert E. "Robyn" Wronski, Jr. at 9:29 PM