If you look at our top viewed posts on the right hand side, you'll see our fan base prefers the silly topics.  So keeping on that theme...

From Wikipedia:  Electra Woman and Dyna Girl is a Sid and Marty Krofft live action science fiction children's television series from 1976. The series aired 16 episodes in a single season as part of the umbrella series The Krofft Supershow. During the second season, it was dropped, along with Dr. Shrinker. When later syndicated in the package "Krofft Super Stars" and released on home video, the 16 segments, which were each about 12 minutes long, were combined into eight episodes. 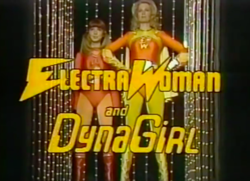 1976 to 1977--ELECTRA WOMAN AND DYNA GIRL--The program followed the crime-fighting exploits of female caped crusader Electra Woman (played by Deidre Hall) and her teen sidekick Dyna Girl (Judy Strangis), who worked in their off-time as reporters for Newsmaker Magazine (The full real names of the two were never revealed in any of the installments, although their first names were Lori and Judy, respectively.) In each episode, the duo would don skintight spandex in a bright flash of light called an "Electra-Change," get into the "ElectraCar," and use an array of technically advanced gadgets to thwart an eclectic collection of supervillains. They were assisted by Frank Heflin (Norman Alden), a scientist who stayed at their "ElectraBase," operating its highly sophisticated "CrimeScope" computer, a parody of the BatComputer, while keeping in continual contact with the pair through their "ElectraComs." Electra Woman and Dyna Girl was basically a female version of Batman and Robin with Dyna Girl uttering phrases like "Electra Wow!" or "Electra Yikes!" and so on.

July 1999--VH-1 WHERE ARE THEY NOW?--"Superheroes"--While a lot of those featured on this show are the actors who played super-heroes, some of them appear in character as their super-hero characters.  Those who appear in-character to talk about what they have been up to since their super-hero days are Captain Marvel (and Billy Batson), two of the Catwomen that weren't Selina Kyle (one being Miss Kitka, played by Lee Meriwether, and the other being Madam Kugar, played by Eartha Kitt), and Dyna Girl.  This confirms that the 1970s Shazam! and Electra Woman and Dyna Girl exist in the same reality as Batman'66.


2001--ELECTRA WOMAN & DYNAGIRL--In the 2001 pilot only Electra Woman comes out of retirement. It's a new Dyna Girl. The original stole Electra Woman's husband, which is why Electra Woman retired and is now a broke drunk who sleeps with anything that moves. The new Dyna Girl is a fan of the duo who wants them to be heroes again.  Aquaman appears and Flash , Batman, Superman and Wonder Woman are all mentioned as real people.  And based on this pilot, Aquaman was an alumni at that school.  Although the pilot never aired, it has been posted on YouTube and it tends to be included on fan-made "bootleg" compilations of the series.

2015--BIKINI AVENGERS--When the Jade Empress hatches a plan for world domination, it's up to crime-fighting duo Bikini Avenger and Thong Girl to stop her and her nefarious minions.  They mention going up against the Spider Queen (one of Electra Woman’s foes from the original TV series). Apparently they exist in the same universe. 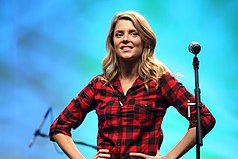 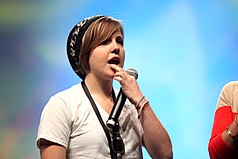