This timline includes Supergirl (as seen in the 1984 film) 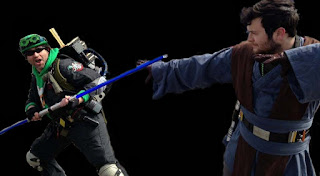 14 ABY (After the Battle of Yavin) - IIvan, unfamiliar with any of the languages being used, is mistaken for a bounty hunter and detained by a Jedi named Taryn Raan, who uses his "Comprehend Speech" ability to determine that IIvan is mostly harmless, only to have IIvan surprise him by wolfing out and stealing his lightsaber.  Taryn quickly overcomes IIvan using the Force and takes him to Yavin IV, location of the new Jedi Academy.  There, IIvan meets several of Taryn's fellow trainees, including a Krytonian maiden from the House of El and two who look like high elves. The training facility, which IIvan refers to as the "Skywalker Ranch", contains records of an alien god called Pomojema who may or may not be the same entity as Typhojem, and whose appearance is identical to that of Cthulhu, leading IIvan to believe that his new surroundings are much more dangerous than he thought possible. 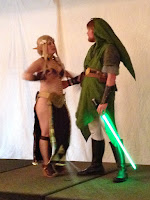 Taryn Raan is one of Luke Skywalker's trainees at his Jedi Academy following the events of RETURN OF THE JEDI in the Expanded Star Wars Universe, specifically just after the events in the 2003 Activision videogame STAR WARS: JEDI KNIGHT: JEDI ACADEMY. The Kryptonian trainee is from the planet Krypton, which was first mentioned in ACTION COMICS #1 (1938) along with its most famous survivor, Superman, though this trainee more closely resembles Kara Zor-El, aka Supergirl, who first appeared in ACTION COMICS #252 (1959). The elven trainees appear to be from Hyrule, home of the characters from the LEGEND OF ZELDA series of videogames, first released in 1986. A statue of Pomojema first appeared in the 1978 novel SPLINTER OF THE MIND'S EYE by Alan Dean Foster, though Typhojem is from BOOK OF SITH: SECRETS FROM THE DARK SIDE by Daniel Wallace (2012) and Cthulhu is from THE CALL OF CTHULHU, a 1928 story by Howard Phillips Lovecraft. [NOTE THAT I'M STILL UNCLEAR IF THE STAR WARS GALAXY IS PART OF THE PAST OF THE TVCU OR IF IT'S A FAIRY TALE REALM OR BOTH OR A KINGDOM HEARTS REALM OR NONE OF THE ABOVE.]

1979--SUPERMAN RETURNS--Meant to be a sequel to Superman and Superman II. Superman finds evidence of where Krypton existed and leaves Earth for five years. This explains my Super-Bob/Powerkid stuff in a timeline where there's no Superman, and this must be the "space mission" Superman is said to be on when Supergirl comes to Earth.

1983--SUPERGIRL--When Krypton exploded thousands of years ago, Argo City, which was covered by a dome, was shot off into space and survived, also going through the same time portal as Kal-El. Kara is Superman's cousin, who journeys to Earth in a mission that will save her people. This takes place at a time that Superman is on a "mission in space". I can't help but place this then during that five years that Superman is gone in Superman Returns. It also helps explain why Super-Bob/Powerkid lived in a world without Superman which is still the TVCU. Interesting sort-of crossover. Madame Selena is the villain from the 1984 Supergirl film. She was a fake witch who gained "magic" powers from an object that fell to Earth from Argo City. Well, turns out that wasn't the first appearance of Madame Selena. She had previously appeared (different actress) in the 1950s Adventures of Superman episode Mystery in Wax, where she is a fake psychic who creates wax figures of people who are going to die, but in reality she is kidnapping the people to look like she is predicting the future.  Since the Adventures of Superman is in the same timeline as this 1980s film series, they can't be the same, but perhaps there is some relation.  Or it's just a coincidence.

November 1984--THE A-TEAM--"Sheriffs of Rivertown"--Face asks Nicole jokingly if she always makes her entrances through a window, like Supergirl.  Of course this is not long after the TVCU Supergirl made her brief appearance on Earth, and made the news thanks to Jimmy Olsen. 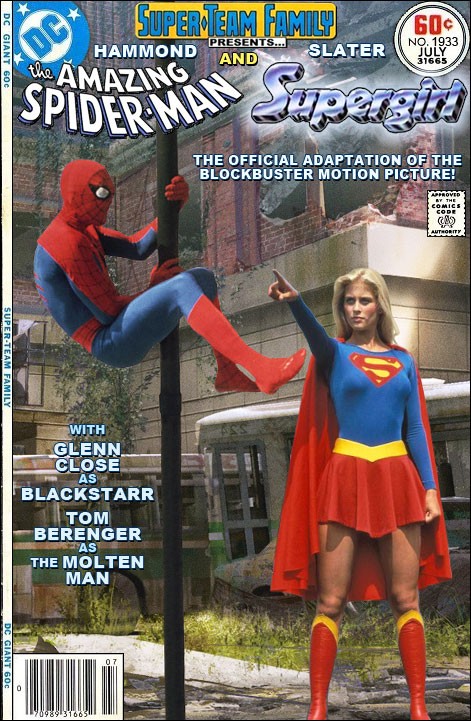 1988--SUPERMAN'S 50TH ANNIVERSARY--This special follows as documentary celebrating Superman. Of course they mistakenly think that both the TVCU Supermen are the same person. A picture if the second Superman's cousin Kara is hanging up at a Metropolis dry cleaners.

2009 to 2015--PARKS AND RECREATION--Perd Hapley is a reporter on this show. It's been revealed that writers intend that actor Jay Jackson's many appearances as an unnamed newscaster on other shows and films is Perd. This includes his Earth-38 counterpart on Supergirl. It would also include DEXTER, THE CLOSER, FAST FIVE, THE MENTALIST, BODY OF PROOF, FRED: THE SHOW, BATTLESHIP, SEQUESTERED, REVENGE, BEYOND, PRETTY LITTLE LIARS, BLUNT TALK, CTRL ALT DELETE, BONES, ROSEWOOD, and THE CATCH. Some of these take place during the same time frame as Parks and Recreation and they take in various cities across America. My theory: Some local anchors get hired by the larger network affiliate for special short term assignments. Perd shows up on many of these shows for just one or two episodes. I think he's simply filling in. Note Jay Jackson also plays an anchorman named Mike Waters on Scandal. Scandal is one of those alternate presidents shows like the West Wing, so I don't think it fits in the TVCU. Thus, I can say that I think Mike Waters is Perd of another alternate reality.

OTHER ALTERNATE REALITIES: Time travelers, when they jump through time, mess things up. Nature abhors time travel and tries to right itself. This must be what is going on in the D.C. television universe. But the time stream is muddied.

Earth-38--In the pilot episode of Supergirl, Winn thought of calling the group with Kara "The Super Friends".  In the episode "Solitude", Non uses the Omegahedron to reconstitute Indigo.  Non is a character originally from Superman II (though briefly seen in the opening to Superman the Movie) and the Omegahedron is from the 1984 Supergirl film.


EARTH-X--This is what the TVCU calls the Naziverse.  There is an evil version of Supergirl in this world as seen in "Freedom Fighters: The Ray".

SMALLVILLE--In this alternate timeline that I used to call TVCU-3, but I don't think I should anymore, the Phantom Zone is depicted as it did in the 1984 Supergirl film.
Posted by Robert E. "Robyn" Wronski, Jr. at 11:09 PM