Another late, late April Fool's post.  I previously covered other pranksters the Joker and Mxyzptlk.  But Loki was the original.  (Ironically, I haven't covered the Prankster, another Superman foe.  I don't think there's much to cover with that character crossover wise.)

Please note this post is not, I repeat not, about really cool TVCU Crewsie Loki Carbis... though maybe it should be.

Also, we will not be discussing Loki, the Angel of Vengeance seen in Dogma (except for in one entry below.)

1981 -- By this point in time, when Mike Nero was 13, his anger and resentment towards the treatment he received from his peers and his inability to get along with and be understood by his family had taken a terrible toll on his psyche. It was at this low point in his early life that he was approached by Rutger, a representative of the Brotherhood of Fenris, worshipers of the Norse lupine deity known as the Fenris Wolf (and none other than the progeny of Loki, the notorious god of mischief!). This was a large kindred of werewolves formed a decade earlier, whose leader at the time -- a savage piece of work called Gottvang -- sent various agents to recruit youthful individuals who in their judgment would expand the power and scope of the pack. Their frequent M.O. was to approach young people perceived as being likely potential supporters by the Brotherhood, and offer them the sacred mystical knowledge they required to become a shamanic lycanthrope.


Notes: One of the summoned monsters is Grendel. Loki tries to summon Nyarlathotep as well, but the spell is not completed before the Turtles stop hm. This is not the main Horror Universe but rather the divergent timeline of Turtles-Prime.

2005--SON OF THE MASK--Ivan Ronald Schablotski recently brought this to my attention:  Hypothetical question: what of Loki? There is the version of Loki in the awful SON OF THE MASK movie, which never the less connects to the first movie and its cartoon spin-off (which in turn connects to Ace Ventura and ALIENS) and there isthe version in the THOR movie, which is clearly a reboot reality. Loki also made an appearence in an early TMNT comic, and the TMNT became aware of their own extradimensional dopplegangers in the recent movie where comicbook version, 90s cartoon version, and 2K version all teamed up. In theory, everyone has a Loki...

2005 to Present--SUPERNATURAL--Wait. Gabriel is Loki. Loki is Gabriel. OK. Now chew on this; the movie DOGMA had an angel named Loki!  Who laid down his sword and chose not to take sides, getting banished to earth.  After getting Drunk

2009--FLANDER'S COMPANY--"Party Party"--The main element of the series is Flander's Company , a company dedicated to the recruitment and placement of super villains, whose talents will be exploited to give work to the superheroes.  Massive Multiplayer Crossover: Considering all the Lawyer-Friendly Cameos and some occasional references in dialogues, Flander's Company is set in an universe which mixes the Marvel, DC, Men in Black, Saint Seiya, Harry Potter, Naruto, Star Wars, Inspector Gadget and Super Mario Bros. franchises. There are some cross-over with Damned, Noob and Le Visiteur du Futur (three other French webseries), too.  also according to the tv tropes page in one episode they go to an alt earth were Superman's spaceship has landed in North Korea instead of America. presumably ssnice word of god says every superman, Expy and Stand in were in ther army of Supermen in final crisis he'd have been there too.  In the "Power Party" episode, we can see Elektra, Captain America, Scarlet Witch and Supergirl. Can you identify other superheroes or supervillains ? At 3:45 is the briefest shot of a TMNT, orange bandana (which would make it Mikey), 3:46 shows what may be the Silver Surfer, 3:47 the red tights belong to one of the Incredibles (most probably Violet), but at 5:57 there are two female members of The Incredibles (meaning we have both Violet and ElastiGirl), at 6:15 we may have Catwoman, at 6:43 is a female Spider-Man (not Spider-Girl, at least, not a very good one), and of course there are others I didn't recognize. In the overall series, There are cameos of:

[Thanks to the combined efforts of Jonathan Gysen, Ivan Ronald Schablotski, and Matt Hickman for helping me to compile the list of crossovers in this entry, with additional research aid from Wikipedia and TV Tropes] 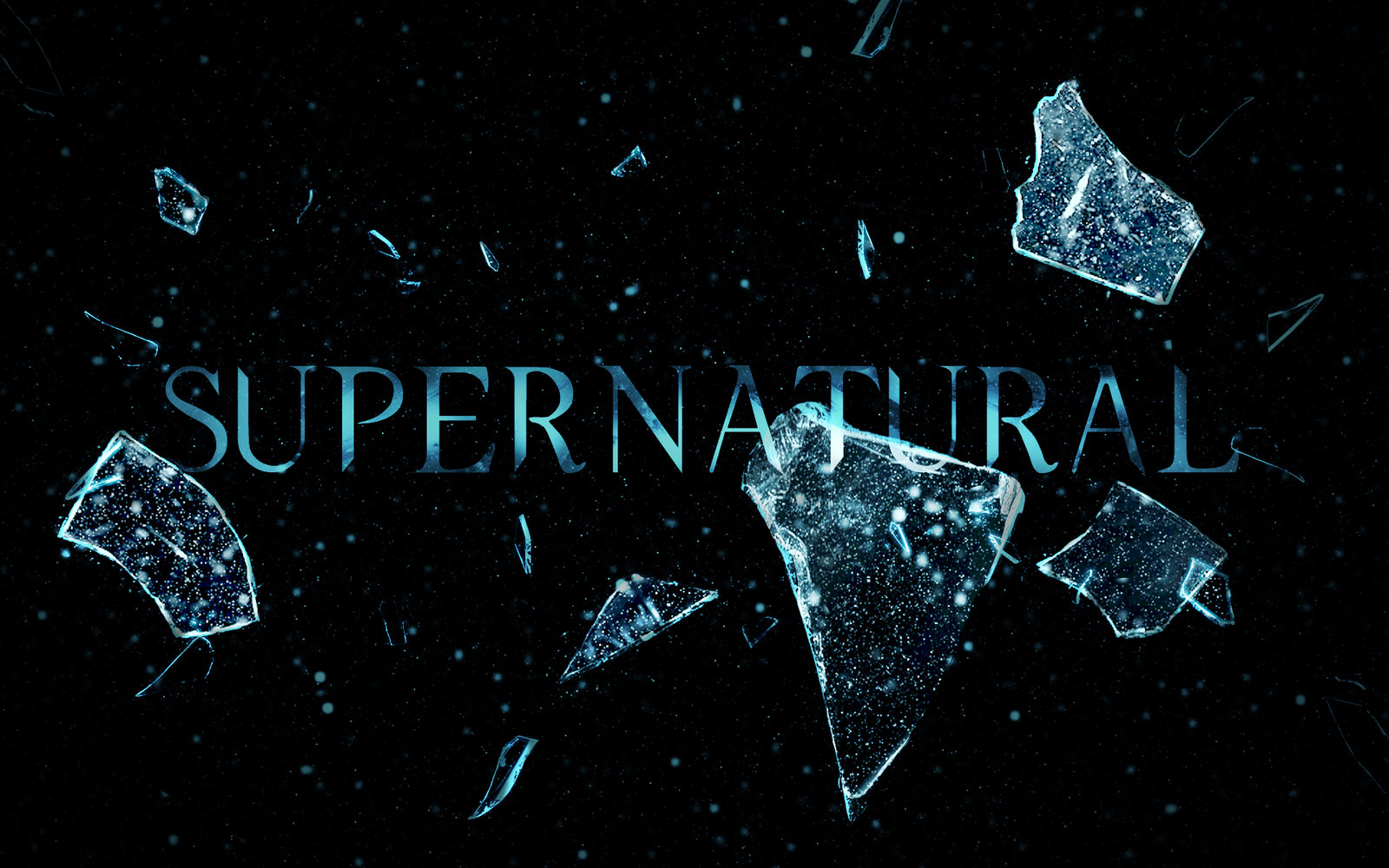 SEASON 5 EPISODE 19 “HAMMER OF THE GODS”
Release Date: April 22, 2010 (Contemporary Setting)
Non-Horror Crosses: Avatar
The Story: Sam and Dean get lured to a summit of gods who are meeting to try to stop the apocalypse.
Notes: There are a few things to mention here. First, the apocalypse that is going on during this season is mostly going on without the general public being aware, thus it still works in the Horror Universe main timeline. However, as this series reveals, had it not gone unstopped, it would have led to at least one divergent timeline resembling a zombie apocalypse. The Lucifer and other angels involved in this series are probably the real deals, as opposed to posers we often encounter in the Horror Universe. In this episode, Gabriel (who had previously been posing as a Trickster) is revealed to also be Loki. Perhaps that’s true, but more likely Gabriel had been posing as Loki while hiding from his Heavenly brethren. Finally, Gabriel/Loki suggests escaping from the apocalypse by running off to the planet Pandorum. This is the planet from Avatar, which also has strong connections to the Alien film series.


2012--MARVEL'S AVENGERS--In 2012, a group of heroes arose, and banded together, as seen in the film. The reason for the placement here is because the MCU has had numerous TVCU crossovers. However, I think the TVCU and MCU diverge with Infinity War.

2013--JAY AND SILENT BOB'S SUPER GROOVY CARTOON MOVIE--Jay and Silent Bob become Blunt Man & Chronic for real.  They encounter the movie version of Bane and the comics version of Loki, as well as a Dock Ock wannabe.  Cocknocker returns as a real villain.  The story ends with Stan Lee asking them to join the Avengers Initiative.  I'm not even going to work out these crossovers in TVCU continuity.  Oh, Magneto's there too.  And they also run into Doc Brown (from BACK TO THE FUTURE).

2014
FEB 22 - TWILIGHT OF GODS AND MONSTERS - The Viking Ragnarok is thwarted by various forces on Earth, including the Bay State Ghostbusters, New England Ghostbusters, and Arkham Ghostbusters, who aid Hlorridi and the Æsir against their demonic foes by using their gear and Ivan's copy of the Necronomicon ex Mortis to banish many of the combatants (plus Ivan) to the Dreamlands. In the Dreamlands, Ivan becomes a sailor called Trevor of Maplecroft. "Trevor" is assisted by a traveler named Harbard, and confounded by a shapeshifter callede Hveðrungr, who eventually escorts Ivan to a ghoul grotto that leads to a tunnel entrance in Florida, Massachusetts.
Ragnarok is the "Twilight of the Gods" from the Norse Myth Cycle. The Ghostbusters franchises represent the 1984 film GHOSTBUSTERS. The Necronomicon ex Mortis is from EVIL DEAD (1982) and its franchise, inspired by the Necronomicon from Lovecraft's 1924 story "THE HOUND". Harbard is an alias used by Odin from Norse Mythology, who was shown here only slightly more powerful than a normal human due to the effects of Ragnarok. Likewise, Hveðrungr is an alternate identity of Loki. Hlorridi is another name for Thor, who though red-headed and bearded as per myth, is garbed as the MARVEL CINEMATIC UNIVERSE version of the character, as first seen in THOR (2011). The ghouls found in the Dreamlands are from H. P. Lovecraft's 1926 story PICKMAN'S MODEL and other Cthulhu Mythos tales. The tunnel in Florida MA is the Hoosac Tunnel which passes through the Hoosac Range of the Green Mountains in western Massachusetts. 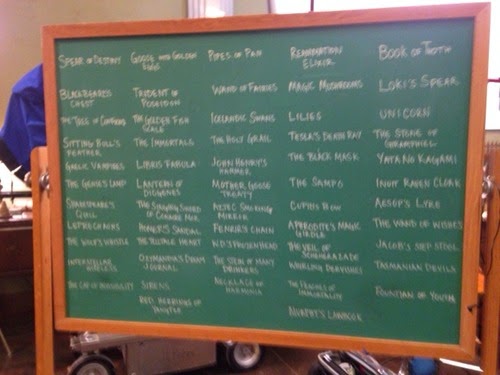 January 2015--THE LIBRARIANS--"The Librarians and the Fables of Doom"--From James Bojaciuk: On tonight's episode of The Librarians, "The Librarians and the Fables of Doom," there is a chalk board with 57 possible causes for fairy tales coming to life. One of them? The Tazmanian Devil. The only other crossovers in the list are The Tell-Tale Heart (from Poe's story of the same name) and Ozymandia’s Dream Journal (from Shelley's poem). From Toby O'Brien:  There may be a lot of nuggets you can use in your particular shared universes. Plenty for me to work with in the Toobworld Dynamic...... The Toobworld Dynamic: From Kiersten Hallie Krum of Entertainment Weekly re: tonight's 'The Librarians'. Finally, Because I had to know, here in no particular order is the list on Jenkins’ chalkboard. My personal favorite is Jacob’s Step Ladder. Reanimation Elixir, Magic Mushrooms, Lilies, Tesla’s Death Ray, The Black Mask, The Sampo, Book of Thoth, Loki’s Spear, Unicorn, The Stone of Giramphiel, Yata No Kagami, The Trident of Poseidon, The Golden Fish Scale, The Immortals, Libris Fabula, Lantern of Diogenes, The Singing Sword of Conaire Mor, Aztec Smoking Mirror, Icelandic Swans, Wand of Fairies, Pipes of Pan, Goose With Golden Eggs, Mother Goose Treaty (of 1918), John Henry’s Hammer, The Holy Grail, Spear of Destiny, Blackbeard’s Chest, Sitting Bull’s Feather, the Genie’s Lamp, Leprechauns, Gaelic Vampires, Ozymandia’s Dream Journal, Shakespeare’s Quill, Homer’s Sandal, Interstellar Wireless, The Cap of Invisibility, Sirens, The Necklace of Harmonia, The Tell Tale Heart, Fenrir’s Chain, W.D.’s Frozen Head, The Stein of Many Drinkers, The Veil of Scherazade, Aphrodite’s Magic Girdle, Cupid’s Bow, Aesop’s Lyre, The Well of Wishes, the Peaches of Immortality, the Wolf’s Whistle, Whirling Dervishes, The Tree of Confucius, Inuit Raven Claw, Red Herrings of Yangtze, Jacob’s Step Stool, Fountain of Youth, Tazmanian Devil, Robert’s Lancel This is my best guess as it’s the only one I couldn’t definitively make out. Would it have killed director Jonathan Frakes to have one camera pan in which the chalkboard was fully legible?!

c. January 11, 2015--THE SIMPSONS--”Bart’s New Friend”--From TVCU Crew member Matt Hickman: In the Simpsons Episode “Bart's New Friend”, Homer is hypnotized into believing he’s 10 years old by Sven Golly, an Evil hypnotist and Foe of Chief Wiggum. In the end, after everything is fixed, Chief Wiggum plays chess with Sven Golly, who manages to make him believe that he is the actual prisoner while Golly is a police officer. Golly then escapes while locking Wiggum in his cell. While in his cell, Chief Wiggum is visited by the Marvel version of Loki. Besides Loki, their cell is just like the one Magneto was in at the end of the first X-Men movie.

December 2016--Loki: Ragnorak and Roll # 1--Loki is banished to Earth and hangs out with a bunch of Satanists. And I really like the concept of all Gods existing and hanging out. There's Ra, Ganesha, Cthulu, the Flying Spaghetti Monster.

August 2017--Urban Enemies--"The Naughtiest Cherub"--The Norse god Loki travels to Hell to meet with Lucifer to try and get his help with Ragnarok (or failing that, get him to promise not to get involved at all). Loki questions whether this is the Hell of Milton, Dante, or Heironymous Bosch, and is told that it's all of them, each of those being separate part of the same place.  (Thanks, John D. Lindsey Jr.) 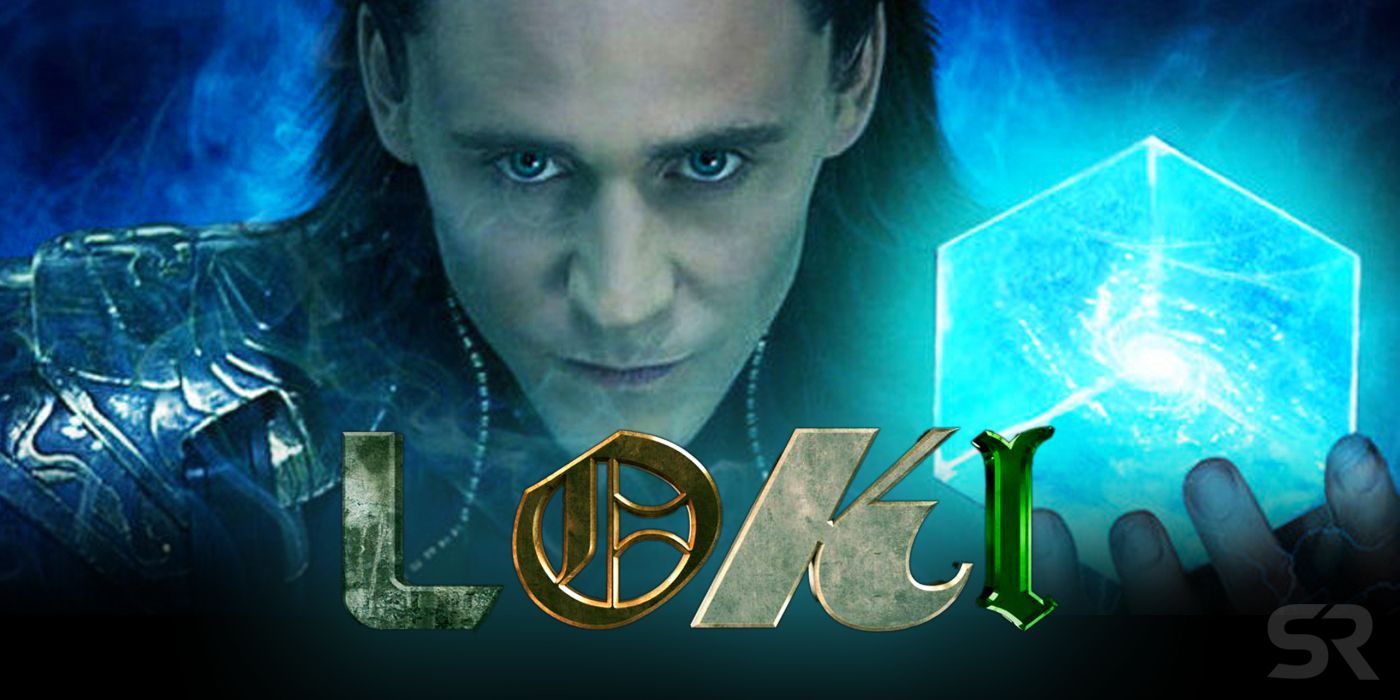 So, around the same time here we’ve got:


(1) The CW Crisis
(2) Chuck “canceling” the multiverse on Supernatural
(3) The final move against the multiverse from the Thirteen in Brian Keene’s Labyrinth Mythos, as seen in his book The Seven
Any other multiversal wackiness going on?

END GAME breached the multiverse, pulling Infinity Stones from other dimensions to replace the ones Thanos destroyed.
1
This was just a sampling of course. I'm sure there are many more Loki sightings in the TVCU, and you should tell me all about them in our TVCU discussion group which you can find here.
Posted by Robert E. "Robyn" Wronski, Jr. at 1:51 AM